"Cincinnati Horizons" magazine encourages readers to submit letters. Letters submitted online may be considered for publication here and in the print edition of the magazine.

The two articles regarding President Steger's impending retirement are wonderful. Deb Rieselman did a great job in capturing the man and his extraordinary contributions to UC. I especially liked the photograph of him with his coat on backwards. I was much less impressed with his big 1-inch vertical leap as he was cheering with the cheerleader.

Joe is a great guy, whom I will miss having as a colleague. Although the university will attract a good successor, in large part because of Joe's contributions, I suspect it will be impossible to find someone with such an admirable combination of vision, management skills and personality.
J. H. Woodward, chancellor
University of North Carolina at Charlotte

I loved the July “Horizons." I have been at UC only three years, so it was neat to read about President Steger. I also enjoyed seeing and reading about the changes on campus. I passed out the trivia contest to the staff for fun. There is something interesting on every page. I really love the magazine!
Diane L. Sparks, R.N., B.S.
Associate director, UC Office of Sponsored Programs

After perusing the "One Man, Two Decades" issue of "Horizons," I reached one conclusion. If there were a Pulitzer Prize for hagiography, this issue would be a strong contender for the award.
Thomas Long, A&S '59, PhD '65
Associate professor emeritus, philosophy
Cincinnati

Congratulations on your excellent coverage of an outstanding individual in the July issue. Having known Dr. Steger since 1983, I found your reports both entertaining and informative. More importantly, you captured the spirit that Joe and Carol have brought to UC Well done.
Dave Sharrock
Columbus, Ohio

Editor's note: An alumnus answers a previous reader's question about the Bearcats playing an invitational basketball game in the Philippines in 1961. [See, “’60s Bearcats” in previous column.]

I can verify that the Bearcat basketball team went to the Philippines because I played for the Bearcats in '61-63 and was a member of the NCAA national championship team.

We made a goodwill trip to the Philippines at the request of the U.S. State Department, leaving UC the September after we won our first championship over Ohio State. There weren't any Philippine college teams then, so we played industrial teams and the Philippine Olympic basketball team. We were gone nearly a month, including a stop in Hawaii and a brief visit to Tokyo.

We had a great time, even went fishing. For no particular reason, on the way back, we all started singing "When the Saints Go Marching In." We didn't know an encore was in our future.

That winter, UC was ranked second in the U.S., and we had to play the No. 3 team in Chicago. When the bus came to pick us up, the other team was already aboard, sitting in the back, glaring at us. You could have heard a pin drop.

Then one of our guys stood up, turned to us and said, "Are we ready?" And just as if we had rehearsed it, we began belting out, "Oh, when the saints … ."

It broke them up. We won that game on the bus.
Larry Shingleton, Bus '63, MBA '64
Cincinnati

Thank you for Mary Niehaus' excellent April contribution "UC's Fine Arts Collection." I spent many hours in the Cincinnati Art Museum and the Rookwood Pottery, so Mary's article brought fond memories, but it also triggered remembrance of a family mystery, which you may be able to help me solve.

My father, Charles Argus, was born on Greenup Street in Covington in 1889. In the early 1930s, when I was a young child, his older sister, my Aunt Emelia, took me on a walking tour of their old neighborhood, pointing out the house where my father was born and also a house with a small plaque where Frank Duveneck, the famous local artist, lived and worked.

She recalled that when my father was about 8, he was playing with a neighbor girl on an ornate iron fence when Duveneck came by. The artist came to the door and asked permission to paint the pair at play and supposedly commented on the beauty of the boy's blond hair in the sunlight.

Sometime before the end of WWII, Aunt Emelia informed me that she had made an intensive search for the Duveneck painting of my father. She was extremely unhappy that no trace of it could be found even though, among other things, she had gotten permission to search the "dusty attic" of the Cincinnati Art Museum.

Like myself, Aunt Emelia was probably completely unaware of Duveneck's connection to UC. Your mention of his works as being among those that represent the "strength of the university's collection" sparked the question in my mind: Is the long lost painting somewhere in the UC Fine Arts Collection?

Thank you again for jogging my memory in such a delightful way. And thank you in advance for any help you can provide me in solving this more than 100-year-old mystery.
Mary Argus, MS (A&S) '47
Falls Church, Va.

Editor's note: The painting is not in the UC collection. Do any readers have additional clues? 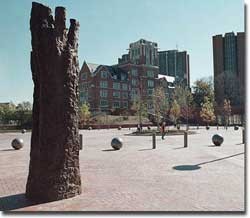 Memorial Hall looks the same, a reader remembers, but the surrounding area has changed greatly. Now used by the College-Conservatory of Music, the former dorm faces a large plaza. Photo/Dottie Stover

In reading the April issue of "UC Horizons," I was studying the picture of Siddall Hall when my eyes focused on Memorial Dorm through the window. I have fond memories of living there from 1953-56, when I got married and left for obvious reasons.

I just read the online article about the new campus and wonder about that old building with the wonderful gargoyles staring at you as you walked up the front stairs and in the rear courtyard where we sunbathed.

I haven't been back to campus since graduation. What is the current use of Memorial these days? I'm glad to see it hasn't gone the way of the amphitheater, tennis courts, Student Union and other buildings I knew.
Jane Miller Simpson, A&S '58
Lorton, Va.

I was thrilled and excited to see all the changes and new complexes. It is wonderful that all these are taking place, and I am proud to be a UC CCM grad. Keep the news coming. One day I may be able to visit.
Carole Torrence Moore, CCM & Ed '59
Colonial Heights, Va.

Thanks for the online magazine. It was great to find out more about UC ... since we flunked the trivia quiz and need all the help we can get!
Patti Miller, JD '00, and
Rebecca Miller, DAAP '97
Cincinnati

William Nester certainly should be included among the college presidents "View from the Top" . He served as a University of Cincinnati faculty member in the Dean of Men's office for a number of years.

Also, when my husband and I were entertained at lunch at the home of the president of Texas A&M at Kingsville, he told us that he had earned his doctorate at UC. Unfortunately, I do not remember his name, but I am sure you can get the information easily.
Wanda Bath Mosbacker
Emerita director, associate dean, professor
Professional development

Editor's note: We were unable to locate the UC-Texas A&M connection, either through UC's own database or through Texas A&M. Other leads are welcome.

In regards to Bill Nester, he certainly should have been included. We simply overlooked him -- along with a dozen other alumni. Because we knew we would miss many people in searching among 214,000 living alumni, we asked for readers to submit names so we could update the list in a future issue. We were still receiving additional names at deadline.

Kudos to UC's illustrious alumni who became CEOs at colleges and universities throughout the country. I remembered vaguely that Juilliard's president or former president was a UC Conservatory of Music graduate. Can you clarify?
Maurice Shigesato, Ed ’51
Honolulu

Letters to the Editor policy
Letters to the Editor must relate to the university, be signed and include addresses, colleges and years of graduation, when applicable. The editor reserves the right to edit letters for length, clarity or factual accuracy and to reject letters of unsuitable content. Letters may not criticize other letter writers. Opinions expressed do not necessarily reflect the views of the University of Cincinnati.