A major gift has helped the University of Cincinnati lure a world-class surgeon to direct UC’s Center for Surgical Innovation. Randall Wolf, who left UC for Ohio State in 1999, is the first U.S. surgeon to do robotic coronary bypass surgery -- a procedure that allows for more precise heart surgery without opening the chest.

Wolf’s return is largely due to a $1.5 million gift from philanthropist Carl Lindner, HonDoc ’85, which makes it possible for the department of surgery to buy a da Vinci robot for research. The da Vinci allows surgeons to operate as if their hands are on the heart, when in fact they are across the room using robotic arms and a camera to direct slender surgical instruments inside the patient’s chest. Experts predict the technology will one day allow surgeons to operate not only from across a room but across countries.

“Robotic surgery is still in its infancy,” says Wolf. “There are more opportunities to decrease the trauma of surgery using this technology in vascular, urology, pediatric and even fetal surgery. Through biomedical engineering, we will make the new devices to fit on the robot.”

UC’s robotic surgery team scored a second coup in attracting Tim Broderick to UC to become medical director of its new interventional technology training center. Broderick has designs on becoming an astronaut and arrives from NASA’s Medical Informatics and Technology Applications Consortium based at Virginia Commonwealth University. His recent work there focused on virtual reality medical simulations in zero gravity -- an effort that will prepare doctors to perform surgery on astronauts.

In an effort to make the UC class ring a unifying token of pride, UC Bookstores recently unveiled a single design with three campus symbols every Bearcat should recognize.

Atop each new ring will be the university seal, with the C-paw on one side and the McMicken tower on the other. The symbols, as well as the single-ring program, were favored in a survey of more than 200 students and young alumni.

Gone are the days of the a la carte class ring. Previously, anyone could order a UC ring with practically any conglomeration of symbols.

The official ring will now be available only to UC alumni and those students who have reached their junior year in good standing. And instead of receiving their ring in a box eight weeks after placing an order, students will now be presented with it in an official ceremony each spring.

“An increasing number of schools across the country are returning to the idea that a single ring provides students and alumni with a true symbol of the university -- common to all graduates,” says Chris Adkins, senior buyer with UC Bookstores.

UC’s class ring sales have declined over the last decade to the point where only a couple of hundred were sold last year. And if UC follows the trend of other schools that have adopted an official ring, sales will pick up “remarkably,” Adkins says.

Alumni who would like the official ring can even trade in their old model, the value of which will be deducted from the price of the new. Class ring orders may be placed at the UC Bookstores or on the UC Bookstores Web site.

“So I’m a doctor,” began humorist, author and CBS correspondent Bill Geist after receiving an honorary doctorate at the UC commencement ceremony in June. “I’ll be giving Botox shots and liposuction out in the lobby.”

Geist didn’t perform surgery, but he cut up plenty while using the keynote address to encourage the graduating class of 2003 to “Go forth unafraid. 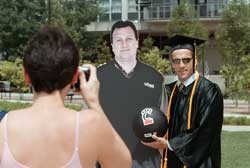 A grad mugs with a cardboard Bob Huggins at "Snaps and Gowns" following commencement. Photo/LisaVentre

“These are fearsome times,” he said. “Or so we are told. You are graduating into a world with terror alerts. Fear not. News channels, politicians and product manufacturers want us to be afraid because fear sells.”

He predicted the local news would soon add a terrorist forecast to the news, weather and sports coverage. “This terror alert forecast brought to you by Paxil. …”

Wry, low-key and self-deprecating, Geist, an Emmy Award winner, poked fun at his own academic achievements and Midwest upbringing. “I lived in land-locked central Illinois and barely knew what a fish was,” he feigned.

“I didn’t actually realize fish had eyes. I thought they were little stick-like creatures that swam around in a breaded state until Mrs. Paul’s hauled them in.”

Complimenting his Midwestern audience as “well-grounded, with an eye for a con man and a pretty sensitive ‘bs’ detector,” Geist encouraged them to continue asking the important questions. “Like, what is Pomp and Circumstance? And why am I wearing a black muumuu?”

Outgoing UC President Joe Steger also joked that the class of 2003 was stuck with him forever, “because I’m stepping out of the presidency this year. So I’m graduating in your class.

“Carol and I will still be worrying about this class for years in a sense that you are our children,” he said more seriously. “You are the last class we will be celebrating with. So if you get a chance and you stop back on campus, make sure you say hello.”

Steger’s remarks were followed by a standing ovation.

Built by Ohio’s ancient peoples, these very early construction wonders command professional respect on a par with Egyptian pyramids and Grecian temples. Unfortunately, most people are unaware of this legacy, since only a handful of examples have survived the last 2,000 years of Ohio weather and the advance of civilization.

Installed at the Cincinnati Museum Center as a permanent exhibit last summer, the “EarthWorks” display is slated for release to the public late this year as a DVD-ROM. Calling it “the first comprehensive, visually engaging publication on ancient mid-America in well over a century,” Hancock said he hoped that “EarthWorks” would lead to a wider appreciation of Ohio’s ancient peoples -- the Hopewell, Adena and Fort Ancient cultures -- and their remarkable earthen constructions.

The invitation to deliver a keynote address at an international math conference came addressed to “Professor McTague,” to both the amusement and astonishment of University of Cincinnati junior Carl McTague.

The salutation was obviously standard procedure for inviting people to London to share the stage with researchers such as John Nash, the Nobel laureate depicted in the film “A Beautiful Mind.” The title on the invitation may have been an accident, but the document itself was not.

Earning a double major in math and music composition, McTague is UC’s first math undergraduate to receive such an honor, as far as faculty can recall. “This student is truly exceptional,” says Timothy Hodges, math department head.

Details and samples are available online.

McTague, who is currently working on a film soundtrack, calls himself an “aspiring composer, fiddler, hacker and mathematician.” Originally an engineering major, he was admitted to UC as a medical student in 1999 and still has not ruled out the possibility of becoming an MD. 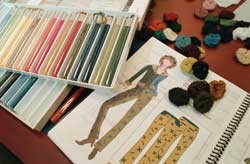 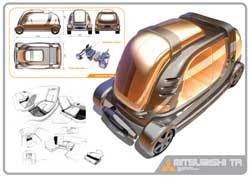 The Tony goes to ...
Michele Pawk, CCM ’85, played Carol Burnett’s mother in the autobiographical comedy “Hollywood Arms” and won the Tony Award in June for Best Performance by a Featured Actress in a Play.

“ I ... feel like Cinderella – a geriatric Cinderella, but nonetheless Cinderella,” Pawk said. “It’s never too late, girls.” The New York Times had earlier noted, “Her performance is a tour de force.”

And the critics choose ...
“ A Man of No Importance,” with music composed by Stephen Flaherty, CCM ’82, was named Outstanding Off-Broadway Musical by the Outer Critics Circle Awards in May. Newsday called the show “the best traditional musical of the season.” In 1998, Flaherty and his writing partner Lynn Ahrens won a Tony, Drama Desk and Outer Critics Circle Awards for their score to “Ragtime.”

Now on CD
When an actress can claim both a Tony nomination and having had Stephen Sondheim compose a song for her to sing, she strives to record her first solo CD with a certain flair. In this case, Pam Myers’ air of distinction comes from singing a selection of Broadway tunes accompanied by each song’s composer.

“ The Chance to Sing,” recently released by LML Music, features Stephen Schwartz, John Kander, fellow CCM alumnus Stephen Flaherty and eight other composers at the keyboards. In reviewing the CD, Show Business Weekly said Myers, CCM ’69, sounded “as brassy and radiant as ever.”