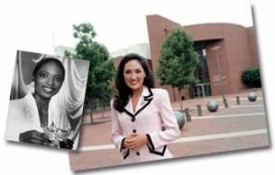 Question: Which is the largest student organization on the UC campus? Answer below.

Answer: The Bearcat Bands is the largest student organization on campus, with about 250 members. As Marching Band, Basketball Pep Band, Concert Band, Jazz Band, Percussion Ensemble or Winter Guard, they support campus events to the tune of 100 performances a year.

Summer is a great time for students to sample international travel and learning through programs like those listed below. The UC Institute for Global Studies can help them choose and may be able to link students with grants to lessen the cost.

This past summer, three Bearcats also joined Miami University students for a biology field study in the Bahamas, while three others began a semester at the University of Nagoya through an official UC-Japan student exchange. 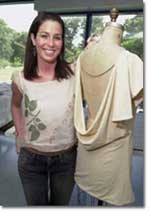 “Sometimes it’s hard to keep calm at work every day,” Hartman admits, recalling fabulous clothes, high-energy designers and last-minute fittings for celebrities such as Britney Spears, Puff Daddy and the “Sex and the City” cast.

See South America grow
Immersed in Chilean culture, business co-op Julie Gast witnessed an improving economic climate in the South American country that signed a free-trade agreement with the U.S. in June. Weekdays, she worked a 10-hour schedule at a Santiago investment firm. Living with her host family in an upscale suburb with shopping malls and multiscreen theaters, Gast saved weekends for Chile’s natural beauty: climbing an active volcano, dipping into thermal pools and skiing.

A stretch in time
Despite his ethnic link and understanding of casual Japanese, co-op Yoshitaka Inoue was required to learn formal business Japanese before being accepted for a chemical engineering post at Toyobo Research Center in Shiga. The cultural immersion was well worth the effort, expanding his appreciation for “new ideas and wider perspectives.”

Wise entrepreneurs
UC co-ops have been an essential resource for young, multi-million-dollar high-tech businesses like the Modal Shop. In fact, when the fledgling vibration-analysis company moved to Cincinnati from Buffalo a dozen years ago it was specifically to connect with UC’s Structural Dynamics Research Lab and talented co-op students.

The strategy worked beautifully, but owner Mike Lally takes no chances. He’s still employing UC co-ops for product development work. He even sent one of them to the parent company’s site in Germany a few years ago for an international co-op assignment.

Oh, the places they go!

To fashions at Hot Kiss
(Designed in L.A.)
And graphics for Wal-Mart
Dot-com in CA,
UC sends the co-ops
To work and to learn
And earn some good paychecks
Before they return.

To Claiborne and OshKosh,
Vic’s Secret, the Gap,
Wild Flavors and Dow Chem,
They criss-cross the map.
For earning and learning,
Co-ops from UC
Leap oceans and mountains,
Shout “Ya” and “Mai oui!”

Their wonderful bosses,
Too many to tell,
All share in the brainwork
Of co-ops so swell.
Their talent and spirit
Expand what they learn,
Plus earn some good paychecks
Before they return.