Read of him receiving $13.21 million for wrongful imprisonment.

After steadfastly claiming his innocence of a 1999 murder for more than a decade, David Ayers tearfully left Cuyahoga County Courthouse as a free man on Sept. 12, 2011, thanks to the help of University of Cincinnati law students who were on hand to celebrate his emotional release.

In 2000, Ayers was convicted of murdering a 76-year-old woman who lived in the public-housing complex where he had been employed as a security guard. He was sentenced to life in prison without parole for aggravated murder, aggravated robbery and aggravated burglary. 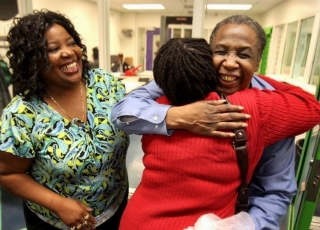 David Ayers hugs family members as he gets released from more than a decade in prison.

Eight years later, the Columbus Dispatch newspaper ran an investigative series exposing Ohio's “flawed evidence-retention and DNA-testing systems.” In that coverage, Ayers was identified as a prime example of a prisoner who deserved DNA testing.

That’s where UC students stepped in. Getting post-conviction DNA testing done to prove someone’s innocence is exactly what the Ohio Innocence Project does. Part of a national program, the OIP is housed at the UC College of Law.

Ultimately, DNA test results excluded Ayers from the crime and indicated that a pubic hair found in the victim’s mouth belonged to someone else. When Ayers walked out of the Cuyahoga County Courthouse, heavily leaning on the arms of his family for support, he was the 11th inmate whom UC students helped free or for whom they had a death sentence commuted.

Over the years, many students had worked on Ayers’ case and were anxious to witness his freedom, “particularly for the last couple of students who had an opportunity to meet and talk to Mr. Ayers,” says OIP attorney Carrie Wood, JD ’05. “Everyone very much believed in his case.

“Victories are sometimes few and far between,” she adds. “Something like this reignites you as to why you do this.”

Eight years is the national average length of time from opening an investigation to getting a prisoner free, she says. “It takes time to do a thorough investigation before we decide to take on a case. Then litigation takes quite some time.”

In Ayers’ case, Wood and her students were working with the Cuyahoga County Public Defender’s office. “We took over DNA litigation, and they worked on other portions of the case, including constitutional rights,” she says.

Originally, the state’s primary evidence came from two sources: 1) a written statement by a man who later recanted portions of it during the trial, saying two detectives pressured him into making a statement, and 2) testimony from an inmate named Donald Hutchinson, who claimed Ayers confessed to the murder.

In June, the U.S. Court of Appeals ruled that Ayers was to be given a new trial, based upon a violation of his constitutional rights. The court’s published opinion stated the following:

“… Hutchinson and the State were working in conjunction with each other. … Hutchinson testified regarding statements and factual errors that could only come from interactions with the police. Thus, at a minimum, Detectives Cipo and Kovach shared information in Ayers’ case with Hutchinson. At its worst, the evidence suggests that the police specifically instructed Hutchinson on what subjects to question Ayers and/or directed Hutchinson regarding what to say in his testimony.

“… Moreover, the prosecutor informed Hutchinson, prior to his testifying, that he would be rewarded for his cooperation by dismissal of all pending actions against him.”

Indeed, all criminal charges against Hutchinson for passing bad checks and for “a probation violation arising out of additional incidents of financial misconduct, theft and dishonesty” were dismissed, and his probation was terminated “with all pending fines and costs vacated.”

On the other hand, Ayers’ Sixth Amendment right to counsel was violated, the court ruled, when law enforcement officers obtained a statement after he had been indicted and in the absence of his attorney.

Noting a “cause for serious concern,” the appeals court reversed the district court’s order, instructing the district court to provide Ayers a new trial within 180 days. While waiting for that trial, the DNA evidence came through.

The Ohio Innocence Project was founded in 2003, at a time that Ohio statistically had one of the largest prison populations without access to an Innocence Project. Funded entirely through private donations, the project provides the kind of legal experience unmatched in the classroom or on most jobs available to law students.

Read of him receiving $13.21 million for wrongful imprisonment.