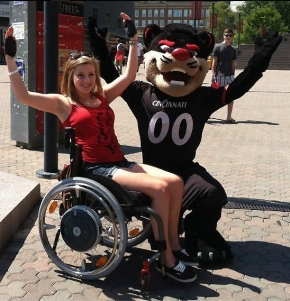 Student Sara Whitestone's stage got much bigger Oct. 23, 2012, when she had a chance to speak in front of the University of Cincinnati Board of Trustees about changing perceptions on campus.

Whitestone, a fresman in the McMicken College of Arts and Sciences, introduced the below video that has now been seen by thousands and, in her words, "opened so many doors to the support network on campus."

Sara explained that she came to UC to chase down a cure for her disease, Myalgic Encephalomyelitis, but her talk with the board was to explain her drive to help other students with disabilities come to UC. At present, she said only six students at UC use mobility devices.

Whitestone's friends, family and even new UC president Santa Ono helped Sara purchase a $12,000 motor-assist wheelchair so she could maneuver UC's hilly campus. Now her goal is to raise money through Sara Spins for the next student's motor-assist chair. She has already identified another student, a freshman in the College of Design, Architecture, Art and, Planning.

Get more details on the Ability Olympics.

"We raised the money for me, and Sara Spins is not stopping," Whitestone told the Trustees. "Now we are raising money for other students with disabilities who will be able to afford technologies and the assistance they need to be able to be on campus.

Making that change, Whitestone points out is largely about continuing strides toward accessibility, equality and inclusiveness.

"This campus is accessible," she says. "Disability services does an outstanding job making sure every issue is addressed. They put students first."

The Dayton resident explained she could have attended Wright State University, a far more flat campus.

"It would have been much easier for me to go there. But I chose to go to UC because UC has inspired me to not settle."

Hilly campus or not, Sara Whitestone won't allow her need for a wheelchair to prevent her from attending the University of Cincinnati. She started at UC on Aug. 27, 2012, in biological sciences. Sara's goal is to chase down a cure for her disease, Myalgic Encephalomyelitis, and she is convinced UC is the place to do it. Friends and family started a nonprofit to purchase a $12,000 motor-assisted wheelchair so she could get around campus. Now that Sara has her new chair and made it to UC, her nonprofit organization, called Sara Spins, is raising funds to help others who are disabled pursue their higher education dream.

Visit SaraSpins.org to help or find out more

The spark for the Sara Spins video started a couple weeks before UC's first day of school in 2012 when @Sara_spins, Sara Whitestone's nonprofit, followed @Uofcincymag on Twitter. Her Twitter handle was just intriguing enough to prompt us to dig a bit.

We soon found her website explaining her desire to come to UC (despite the hills) and the movement of her friends and family to fund the chair she'd need to get around campus.

Once the UC Magazine video posted, social media drove it. Hundreds watched it in the first day. But it was a key retweet by @PrezOno, UC's then interim president and former provost Santa Ono, that seemed to take the project to a whole new level.

It was through Twitter that Ono and Whitestone got introduced. Since then, Sara has received an invitation to speak in front of the UC Board of Trustees as well as take in a UC football game in box seats in Nippert Stadium. You can follow their conversation in the screen capture at right. Or jump into the discussion on Twitter and follow Sara @doubleOsara. 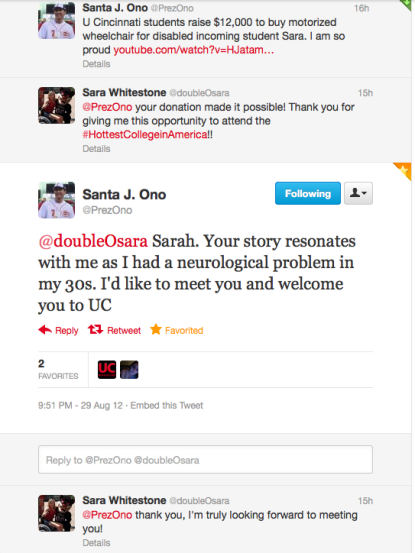 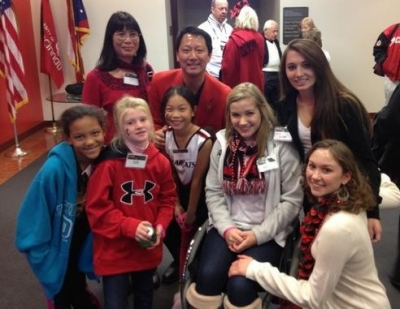 Sara Whitestone spent some time hanging out with UC interim president Santa Ono, his family and other special guests prior to UC's Homecoming football game Oct. 6.