through restoration, recreation and imagination 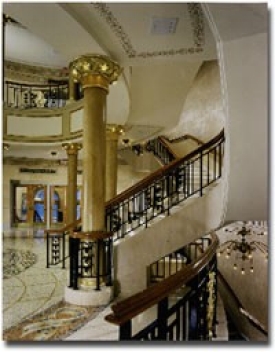 It's called atmosphere. It's what one expects when attending a Broadway show. As soon as ticket-holders pass the box office window, they want the entertainment to begin.

Old theaters achieved atmosphere with such flair. New theaters aim more for comfort. But the Ford Center for the Performing Arts on 42nd Street at Times Square does it all, thanks to the talents of UC architect Dick Blinder, DAAP '59.

The posh luxuries named above made the casting call when the Ford Center opened in November 1997 for "Ragtime" previews. The supporting cast includes such amenities as ample knee room, more women's restrooms than men's and a lower-level VIP lounge.

Launching the theater's construction to accommodate the play's opening was unusually appropriate. While the Ford Center basically rescued significant architectural elements of two historical theaters, the play has preserved pieces of historic biographies. Similarly, the theater took a leap beyond normal theatrical infrastructure to house state-of-the-art facilities, much like the play crossed the line from a simple musical to a special-effects extravaganza.

In designing the theater, Blinder took exorbitant steps to recreate and restore components of two theaters that previously sat on the site: the Lyric, a 1903 Italianate theater that had been gutted, and the Apollo, a 1920 playhouse in a 19th-century English style, which had gone from housing plays to vaudeville to off-color movies before it closed.

Yet anyone who saw construction in action likely feared nothing was being salvaged besides one wall. The site was entirely excavated around a single unit of Lyric facade, which was pinned and wired in place to stand by itself. "There was just a facade sitting there and a hole," Blinder chuckles in remembrance.

The Ford Center has continued to be a disorienting experience. Even today, people often view the interior with puzzled expressions. Trying to figure out which decorative details are authentic antiques and which are reproductions is difficult, if not impossible. Everything looks both old and new at the same time.

The proscenium arch, for instance, looks as if it could have come from the Apollo. And it did. But the arch seems too big to have fit into a smaller theater of yesterday. That's because it didn't. At least, not exactly. It is the original arch, but restoration artists carefully expanded it from 35 to 50 feet in width. 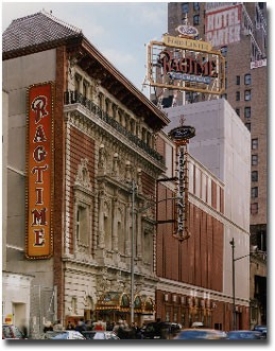 That's an example of how the theater project was far from a pure restoration or a straight reconstruction. It carefully integrated both.

Genuine artifacts were refurbished so extensively that they appear new. Conversely, brand new items are reproductions created specifically to unite the artistic feel of the original theaters.

Artists who specialize in restoration were brought in for a wide variety of tasks. The Apollo's original box seats in the auditorium were rejuvenated, expanded and reinstalled. Furthermore, the Apollo's genuine domed ceiling was saved by cutting the plaster into 16 pieces, hauling it to the ground with a block and tackle, and putting it back together again. Artists also recreated the Lyric's original domed ceiling from photographs, install it in the lobby and produce an entire decor to complement it, including a gigantic mosaic floor underneath to depict the masks of comedy and tragedy.

"The theater was built as homage to old Broadway," says Blinder, a partner in Beyer, Blinder & Belle, a New York firm known for working with historic buildings. "It recalls what theater is all about."

Contributing to that feeling are low-wattage, exposed-filament light bulbs, similar to turn-of-the-century Edison bulbs; auditorium murals of frolicking maidens hand-painted in a 19th-century French style; and a grand limestone staircase for "people watching." Blinder sums it up best: "It has the spirit and character of Broadway."

Following one year of design work and one year of construction, the theater welcomed the opening of "Ragtime." Once reviews started hitting the streets, the theater started pulling in its own rave reviews: "Architecturally speaking, the Ford Center is a sparkling medley, smoothly pieced together from the ornamental tunes of Broadway's great old houses," said "The New York Times." "The rousing prelude deserves a warm round of applause. The theater is a beautifully orchestrated pastiche."

Condensed from the January 1999 issue of "University of Cincinnati Horizons" magazine.