WHILE BEING INVITED to the president's office may sound impressive -- or nerve-wracking, depending upon the situation -- such an invitation at the University of Cincinnati could come from several different sources. The university has the rather unusual distinction of having three presidents on one campus: Nancy Zimpher, who took office in October '03; president emeritus Joseph Steger, '84-03; and president emeritus Henry Winkler, '77-84, A&S '38, MA (A&S) '40, HonDoc '87.

Steger says such a presidential trio is rare. "Most college presidents retire and disappear," he says. "My friend at Gettysburg College retired as president and moved so he could go sailing. They usually say, ‘I'm never doing that again!'"

And although hundreds of people visit the presidents' offices at UC each year, the average person is unlikely to ever have that honor. Until now. 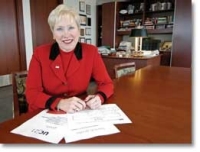 How much time does President Nancy Zimpher spend in her University Pavilion office? "Not enough," she replies, pointing to the several stacks on her desk of reports and presentations she needs to prepare. On Oct. 15, ’04, for instance, her day started with a 7:30 a.m. meeting and ended after she judged the slam-dunk contest at the Midnight Madness basketball game. Among the day's 10 meetings were a UC hockey game where she dropped the puck and a local professional organization's lunchtime event where she was the featured speaker, one of nine speaking engagements of the week. She uses many such occasions to explain UC|21, the university's vision to "define the new urban research university."

President emeritus Joseph Steger's office sits high atop the College of Business's Lindner Hall, overlooking much of the physical campus transformation he is known for accomplishing through the Campus Master Plan. Admittedly "quasi-retired," Steger is busy establishing a Center for Nonprofits, currently collecting data and meeting with local managers to determine their areas of greatest need. Next fall, he expects to teach.

In a Langsam Library office, 88-year-old Henry Winkler still shows up to continue his research on British history, create lesson plans for the latest class he's teaching and work on several committees. "I retired at 70 because I had to," he says. "Those were the rules at the time. But it allowed me to become honest again; my first love was my academic profession. So I took a few years to retool myself, then taught off and on. I just finished my second book on British labor."

Discover UC top to bottom: Inside the cupola and steam tunnels

More museums at the Medical Center