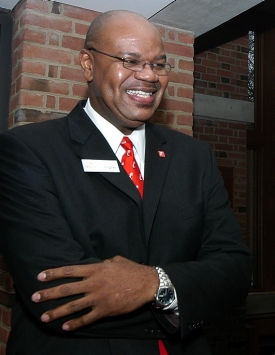 Hughes played for the Bearcats in the '80s. Photo/Lisa Britton

It's all about recruiting. Recruiting a 6-foot-7 high school basketball player from Leighton, Ala., to play at UC. Using a UC degree to recruit world-class businesses to major metropolitan areas. And using that experience to recruit UC alumni engagement in their alma mater. For Myron Hughes, Bus '86, the circle is complete now that he's the new executive director of the UC Alumni Association.

"The UC Alumni Association is about creating relationships, first and foremost -- connecting people and possibilities while linking the past to the future," Hughes says. "I am honored to receive this opportunity to return to my university and do this important work with my fellow lifelong Bearcats."

"We are a large, urban university with a wonderful family of alumni whose experiences, interests and dreams are quite diverse," UC president Nancy Zimpher says. "We're thrilled that Myron has chosen to come home and lead UC's alumni relations efforts because the passion and involvement of our alumni will greatly enable us to realize our institutional aspirations."

Hughes, who assumed his new post in February, will lead the university's alumni engagement initiatives, seeking to build and strengthen connections with alumni. "It's going to be lots of fun being part of a family that I love," he says.

That love was mutual when Hughes wore the No. 44 jersey in the '80s. This is how Bearcat basketball star Roger McClendon described his teammate in the book "Tales from Cincinnati Bearcats Basketball," by Michael Perry (A&S '84): "He was our protector. He was the father figure, the big brother. … You know how some people could get in the ring, like Muhammad Ali, and punish a guy, but then off the floor, he's kissing babies? Myron had that split personality."

After being recruited by former UC basketball coach Ed Badger, Hughes quickly considered Cincinnati his adopted home. "More than basketball brought me to UC, and more than basketball kept me at UC, even as we went through our own coaching change at the time," Hughes says, recalling the 1983 transition from Ed Badger to Tony Yates.

His degree in marketing led him into a career in economic development, which included seven years with the then-Greater Cincinnati Chamber of Commerce (now the Cincinnati USA Regional Chamber), where he was manager of national marketing and recruited business development prospects to Cincinnati, much like he had been recruited here from Alabama. He also worked for two years as downtown division manager for the Cincinnati Department of Economic Development before leaving town in 1995.

Next, he filled economic-development leadership roles with the St. Louis Regional Chamber and Growth Association, the Memphis Center City Commission and, most recently, the Greater Tampa Chamber of Commerce, where he was vice president of economic development.

"Myron blends a breadth of experience, a knack for building partnerships, an understanding of this university and a passion for its people," says Michael Carroll, UC's vice president for development and alumni affairs. "This array of qualifications and abilities will translate perfectly in the UC of today and tomorrow."

"The UC Alumni Association is undergoing a strategic transformation similar to what the overall university has done," says Robert Dobbs, president of the UC Alumni Association's volunteer Board of Governors. "So it was paramount to identify someone with the leadership qualities, character, experience and devotion to steward this vital work. Myron fills the bill on all counts."

"Overall, I just want to get alumni more engaged," Hughes says. "And I want to get the message out that UC is a tremendous part of the city. This position and this university mean a great deal to me." 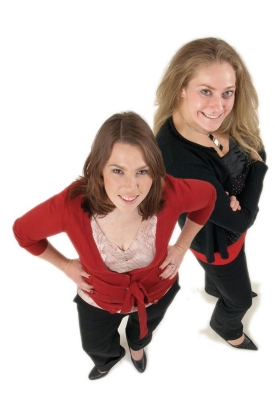 Taking UC to alumni
around the country

How do you maintain a close relationship with UC if you're not physically close to campus?

That's the question for the 100,000-plus alumni -- about half of all UC grads -- who live somewhere other than Greater Cincinnati. For many, a big part of the answer is the UC Alumni Association's Regional Alumni Network program, which includes about 30 networks throughout the U.S.

In areas with significant numbers of UC graduates, regional alumni networks connect alumni with the university and each other, based on their location and other things alumni have in common, says UCAA program director Anne Williamson.

"Alumni who move to a new city are often surprised to find so many fellow alumni already there -- a willing and able support system. They connect immediately upon realizing they're each from UC," she says.

UCAA's regional alumni networks were formerly known as "chapters," but considering how and why people interact, they sort of renamed themselves naturally.

"The biggest benefit comes from the networking we do and the friends we make," says Matt Carlin, Bus '04, a leader of the Tampa network. "Building around a common background makes it much easier to meet people and provide a context for conver-sation."

"When you're a young professional, it's motivating to be around former UC students who are successful in the real world," says Keith Gaydosh, Eng '02, who is part of the Cleveland/Akron network's leadership team. 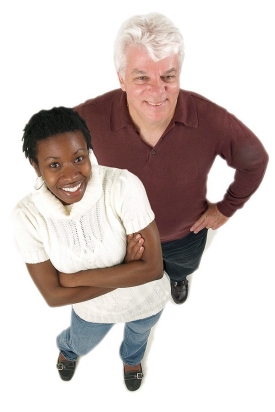 Carlin also points out the fun of rallying around Bearcat teams when road games bring them nearby or for game-watching parties. "For example, this football season brought many alumni out of the woods and back to celebrating the university," he says.

Later that month, when caravans of alumni from Cincinnati drove to the PapaJohns.com Bowl in Birmingham, Ala., Bearcat numbers were swelled by groups from networks throughout the eastern half of the U.S.

Yet the rich diversity of UC's alumni and their interests affects how regional alumni networks work to engage their constituents. "A mixture of programs is necessary," says Jayme Little, CCM '99, a leader of the Indianapolis network. "To cater to the vast differences in our alumni, we strive to offer activities related to the arts, culture, service, sports and more."

The value of having a network of other UC alumni in your area becomes a personal choice. As with most opportunities, what you put into it determines what you get out of it.

"All the wonderful people I've met through our events have helped me create a stronger network and build relationships around the city," says Sarah Jane Knight, DAAP '06, whose fashion design degree took her to Minneapolis upon graduation. She learned that her new city had hundreds of UC grads but no regional alumni network, so she worked with the UC Alumni Association to start one.

"If you're in a city where the UC Alumni Association has an active alumni network, and if you've thought about attending an event but haven't followed through, make sure you stop by the next one," she says. "You could open doors you didn't even know existed."

Little concurs, saying, "I simply encourage our alumni to attend one event in your area. You may find something you like that will bring you back."

Little's Indianapolis network co-leader, Doug Yerkeson, Eng '90, JD '93, is aware that the proximity of some networks to Cincinnati presents an ironic challenge.

"Within a couple hours of campus, many engaged alums may visit campus frequently, but we want to make sure that doesn't come at the expense of interacting with each other in their own areas," Yerkeson says. 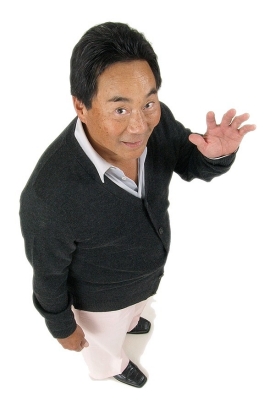 "Being near to UC itself is a bonus for alumni in places like Dayton, Columbus or even Louisville where there isn't an active alumni network," she says. "Networks and the benefits they provide depend on alumni participation levels. When someone says they want to start a network or bring new energy and fresh perspectives to an existing one, all of the alumni in their area will benefit -- and so will UC overall.

"I've heard many of our network leaders say, 'It makes my day to get an e-mail or phone call from a fellow alum I've never met and who may be new to the city or just decided to ask when our next event is," Williamson says. "We're in the 'alumni outreach' business, which includes creating ways for alumni to reach out to each other."

For the volunteers who help lead the networks, as well as those who might become more involved, the passion they exhibit as alumni is an extension of a rewarding student experience.

"This allows me to feel closer to UC," says Joe Henderson, DAAP '03, of Columbus. "UC gave me so much that I want to keep that close bond, and if there's anything I can do for my university, I'll do it."

Dennis Hubbell, Bus '95, sees his participation as a way to enhance a stake in his alma mater.

"I had a wonderful experience there, and I wouldn't have the job and lifestyle I do now without UC," he says. "This is a big reason why I participate. I want my personal investment in UC to keep growing in all ways."

That's a recurring theme among network leaders -- that if UC matters in your life, this kind of engagement is natural.

"Recruiting students, funding scholarships for incoming students from our areas, promoting UC to others, engaging our fellow Bearcat grads. … To me, it's all part of being an active and caring alumna," says Atlanta network leader Kathleen Atkins, Eng '90.

How to get involved

Keep in touch with other Bearcats through UCAA social media

These Regional Alumni Network leaders represent only a part of the UC Alumni Association's national roster. Alumni also can get involved with networks in these areas: