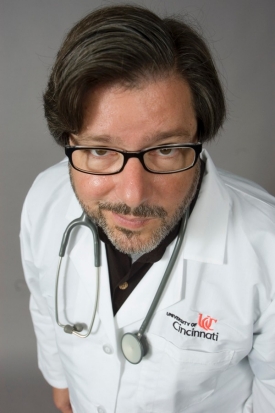 The unusual research conducted by UC business professor James Kellaris has literally made its way around the world, garnering national and international press coverage. Kellaris' research explored the phenomenon of "earworms," the result when a catchy tune gets stuck in your head. While earworms affect many of us, there is no known cure. And while Kellaris says he is thrilled with the attention the research has received, he wants "UC Magazine" readers to know he's not just "Dr. Earworm."

What is the focus of the bulk of your research?

My ethics research examines how people make ethical decisions, including factors that can lead to unintentionally bad decisions. The very same controversial business practice, for example, can seem more ethical when compared to murder, less ethical when compared to the Boy Scout code. Sometimes good people mess up by adopting the wrong frame of reference when making an ethical judgment.

How does this research impact the average person?

Most people intend to do the right thing, but few realize how circumstances can sway our decisions and actions. My research examines those circumstances and ways to make people more aware of them -- especially future business leaders attending the College of Business.

How and why did you become a researcher?

I was very curious as a child and liked to disassemble things to see how they work. But I would often get in trouble for doing so. So I switched to disassembling minds. Today my research is still driven by childish curiosity. To fix something, you have to figure out how it works. And there are plenty of things that need to be fixed.

Describe the earworm research in a few sentences.

My "earworms" research examines how and why songs sometimes get stuck in our heads. Initially, I suspected that some songs have catchy properties that make them get stuck. But now I have come to the conclusion that the phenomenon is an interaction between music and mind. Any song can become an earworm and some people are more prone than others. Earworms pose an intriguing Catch 22: trying harder not to think about a stuck song will increase its persistence.

Are you surprised by the broad press coverage the earworm research has received?

I am not surprised that the topic resonates with so many people, but it was surprising to see the story go around the world several times. Like earworms, the story of the UC research took on a life of its own.

What does being named to the James S. Womack/Gemini Chair of Signage and Visual Marketing for the College of Business mean to you?

The Womack/Gemini chair was an unexpected blessing. It provides more time and support for my research activities in general and an opportunity to extend my work from the auditory to the visual domain. I hope to learn about the sign industry and examine issues pertaining to how the design of signage influences information processing.