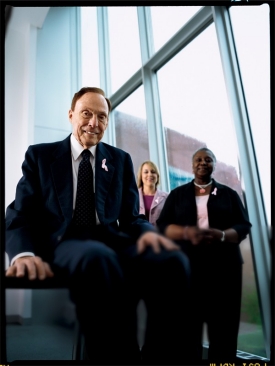 Breast cancer survivors recognized UC researcher Elwood Jensen with the Susan Komen Brinker Award for Scientific Distinction in 2002, one of many impressive prizes he has accumulated throughout his career. photo/Lonny Kalfus

The boxer dropped his guard just long enough for Elwood Jensen to land a powerful body blow. It was a direct shot to the solar plexus, a knockout punch that would become his inspiration for a lifetime. Never again would the lanky 145-pound chemistry major shy away from taking a risk -- whether scaling a mountain or climbing into the ring with cancer.

Though only 18 years old, Jensen was the boxing champ his junior year at Wittenberg University. He had advanced to regionals at Memorial Hall in Springfield, Ohio. He would eventually be eliminated from moving on to state competition after a close decision, but not before delivering consecutive Friday-night knockouts in front of 3,000 people.

Looking back on the 1939 bout, the 88-year-old UC researcher says it was that moment nearly 70 years ago -- when the referee raised his skinny arm over his head in victory -- that became the turning point in his life, a life that would help revolutionize the fight against breast cancer.

"I was two years younger than everybody in my class," says Jensen, whose mother started him in school at age 4. "So I was never very big, and I had an inferiority complex socially. Winning those fights did something for me psychologically."

He left the ring with a confidence to try new things. And it was his courage to pursue an "alternate approach" to science that led to breakthroughs now credited with saving or prolonging more than 100,000 lives a year. Jensen, UC's George and Elizabeth Wile Chair in cancer research, is today revered worldwide for his discoveries of estrogen receptors while at the University of Chicago in the '50s and '60s. Jensen's estrogenic hormone studies forever altered the understanding of how steroid hormones work. For that, Jensen has been repeatedly nominated for the Nobel Prize for Physiology or Medicine, a distinction that would appropriately cap a career that has already seen countless achievements and international science prizes. Jensen, a member of the National Academy of Sciences, was the 2004 winner of the Lasker Award for Basic Medical Research.

The Laskers are known as "America's Nobels." Only two Ohio scientists have ever won a Lasker. The last was UC's Albert Sabin, who discovered the live-virus oral polio vaccine.

Jensen speculates 2008 might be the year the Nobel champagne flows. It is the 50th anniversary of his presentation in Vienna, when he first shared his new concept about the action of estrogen. Ironically, few in the field wanted to hear his controversial theories. "It took six years before estrogen receptors would even be accepted by biochemists," says Jensen. "We got some nasty remarks. People would stand up in meetings and say, 'How dare you talk about a receptor.'"

Jensen's critics had no idea he would become the father of the nuclear receptor field, opening the door to advances not only against breast cancer, but also against thyroid and prostate cancers.

During the 1950s, investigators had been focusing on estrogen's influence on breast tissue. He took a different approach, instead focusing on what impact the tissue had on the hormone. Jensen devised a way to radioactively tag estrogen, and using this tritium labeling technique, he found that only a third of breast tumors carry estrogen receptors. Considering the standard treatment for breast cancer at the time was removing either the ovaries or adrenal glands, Jensen's discovery spared thousands of women from unnecessary surgeries.

Today, by determining which tumors have estrogen receptors, doctors know which patients will respond to anti-estrogen therapy and which should begin chemotherapy or radiation.

Jensen likes to compare his "alternate approach" to medicine to that of the first mountaineers to summit the Matterhorn, the last major peak in Europe to be climbed. Early attempters tried unsuccessfully to go up the Italian side of the mountain, avoiding climbs up the northeast face, which appears an impossible sheer wall of rock from a distance. Studying the northeast face with a telescope, however, an English engraver concluded the northeast face wasn't as sheer as it appeared, and he attained the summit in 1865.

The Matterhorn holds a special place in Jensen's heart and not only because he can relate to those who eventually topped it. Jensen actually climbed the peak himself in 1947. Next to his successes in his early boxing days, climbing the Matterhorn, he says, was one of the most transforming experiences in his life.

"When you see this thing standing there all by itself, it is intoxicating," he says. "Even my first wife, who made me swear I wouldn't try to climb it, said, 'If you want to, go ahead.' And so I did, and I made it to the top."

Jensen spent his professional career scaling what many in his field considered to be the sheer face of research. And at his age, most scientists have stopped their climb. But for Jensen, the challenges that lie ahead, much like the Matterhorn, remain too intoxicating to walk away.

Pharmacy researcher Georg Weber led a study of a biomarker that may be an early predictor of advanced breast cancer. Weber and his team identified the molecule Osteopontin-c, which appears to predict breast cancers likely to metastasize and spread to other organs. The discovery could influence therapy decisions and help patients avoid undergoing unnecessary aggressive treatments.

Cancer researcher Kathleen Havlin is working to determine if inducing menopause by shutting down the ovaries reduces the recurrence of breast cancer. Havlin is leading a study of 3,000 women with early-stage breast cancer that involves making them begin menopause prematurely.

Radiologists from the Barrett Cancer Center at UC participated in a national study that established MRI as a critical tool for determining the extent of breast cancer in a women's body. The study determined that giving women with newly diagnosed breast cancer an MRI often detects the disease in the second breast when it would have gone undetected by mammography.

Doctors Jennifer Manders and Elizabeth Shaughnessy are leading a trial to determine if a genetic test can help doctors tailor breast cancer treatment. Experts say findings should give physicians a better understanding of their patient's tumors and help them determine whether to treat with chemotherapy, hormone therapy or a combination of both.