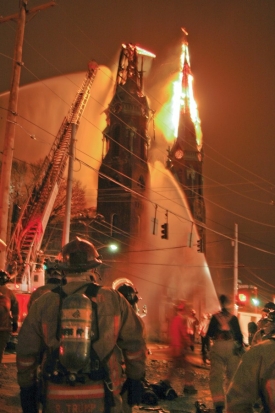 A new study by UC researchers has revealed firefighters are at an even greater risk than the obvious dangers of fighting such blazes as this, a Feb. 1, 2008, fire that destroyed the twin spires atop Old St. George Church adjacent to UC. Officials say the church on Calhoun Avenue can be salvaged. photo/David De Bol

After hours of battling a three-alarm blaze, an engine full of soot-covered firefighters heads back to the station. Upon arrival, the men and women shed their gear and fall into their bunks to catch some sleep -- thankful everyone escaped harm.

Environmental health researchers at the University of Cincinnati have shown that the hot zone for firefighters may well extend far beyond the flames. In fact, their research indicates that the place where most firefighters feel the safest -- the firehouse -- may actually pose a serious long-term health risk for certain types of cancer.

University of Cincinnati environmental health researchers Grace LeMasters and James Lockey, working in conjunction with Ash Genaidy, a researcher from the UC College of Engineering, looked at studies covering 110,000 firefighters and several decades. They found that rates for testicular cancer in firefighters are 100 percent higher than the general population. Their work also reveals that those in uniform are 50 percent more likely to fall ill with non-Hodgkin's lymphoma and multiple myeloma. The risk to firemen for prostate cancer increases by 28 percent.

LeMasters says firefighters are trained to wear the appropriate gear to protect from being burned or inhaling dangerous smoke while inside a burning building. But they are still susceptible to a dangerous "soup of exposures" even after the emergency is over -- while standing outside a fire and inhaling smoke or even while inside the station if diesel fumes aren't properly ventilated.

Of particular concern is the soot that firefighters carry back with them on their faces, hands and under their gear. LeMasters says soot is a group-one carcinogen, a top cancer-causing agent, that gets sucked into the body through the skin, particularly when firefighters sweat and their pores open.

"We are concerned that though firefighters may have respiratory protection, they really aren't getting adequate protection from absorption of these compounds through their skin," says LeMasters. "A lot of firefighters have told me that they come back from fires covered in soot. Often times they are too tired to shower. They will just fall into their beds and go to sleep."

She says many firefighters have only one set of gear. And when they respond to a second alarm before their protective clothing is washed, they are slipping back into contaminated clothes. 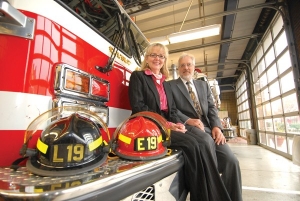 UC researchers Grace LeMasters and James Lockey have uncovered evidence that the environmental elements firefighters come into contact with are placing them at an increased risk for testicular cancer, non-Hodgkin's lymphoma, multiple myeloma and prostate cancer. Photo/Dan Davenport

"We have to make sure that firefighters remove all the soot from their body as soon as possible," LeMasters says. "And we can afford to buy firefighters two sets of turn-out gear to go out and fight these fires. All firehouses have to make the investment in the health of their firefighters by making some relatively simple changes."

The UC study received considerable attention from the national media. The findings are also responsible for helping to trigger the International Agency for Research on Cancer to review the risk of firefighting and classify the profession as an occupation with "potential cancer risk." Perhaps most important, UC's researchers have gotten traction with their warnings to those who most need to hear it.

"We never thought a little soot on our face or hands was a problem," says Billy Goldfeder, a deputy chief with the Loveland-Symmes Fire Department near Cincinnati. He hosts a popular broadcast called "Through the Smoke" on Firehouse.com. He interviewed LeMasters and Lockey in a two-part series for his show.

"I know so many firefighters who have either died or are suffering from cancer," says Goldfeder. "What a wakeup call. Little did we know that we couldn't try harder to introduce some cancer causing agents to our bodies."

LeMasters and Lockey are passionate about spreading the word about the elevated cancer risk to firefighters. Lockey even attended the International Association of Firefighters meeting last fall to share their findings.

"Firefighters do a tremendous service for us by putting their lives on the line as part of their daily job," LeMasters says. "We shouldn't ask them to put themselves at risk for cancer, too."

News release about the research