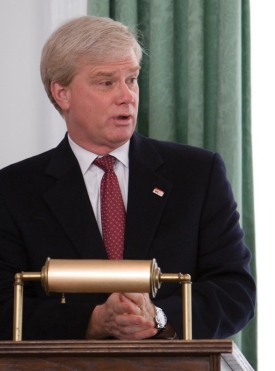 by Michael Carroll, president of the UC Foundation

The University of Cincinnati is in the final stages of rolling out the largest fundraising campaign in its history. On Nov. 27, the UC Board of Trustees, on recommendation from the UC Foundation Board, approved a campaign goal of $800 million by June 30, 2013. Slated for public kickoff this fall, this campaign will benefit scholarships, educational initiatives and resource needs throughout all the university's campuses.

That doesn't mean, however, that we're waiting until fall to begin the work. While decisions are being finalized for a campaign brand and funding initiatives, the "quiet phase" of this campaign has already seen more than $300 million committed by alumni, friends, companies and foundations around the world.

Our co-chairs for this campaign are Buck Niehoff, JD '72, of Peck, Shaffer and Williams, LLP, and Otto Budig, Bus '56, president of the Budco Group.

Buck was a trustee of the UC Foundation before his appointment to the University of Cincinnati Board in 2002. He has served as a member of the College of Law Board of Visitors and the College of Nursing Board of Advisors, and his personal generosity has enriched programs throughout the university for more than three decades.

Otto also has made a difference for his university, with service as a UC Foundation trustee and support that's strengthened scholarships, improved campus green spaces and enriched programs. Initiatives that have benefited from his long-standing support include the College of Medicine, the College of Business, the College-Conservatory of Music and athletics -- almost 40 years worth of "more."

For the campaign, Buck and Otto will help us recruit and oversee as many as 500 volunteers across the country while cultivating relationships with alumni, UC's corporate partners and friends.

I look forward to sharing our successes and our challenges with you as the public campaign gets under way later this year. To those who have already committed their personal support and to those who will in the months ahead, thank you for your enthusiasm and confidence. You are making the future possible for the University of Cincinnati. 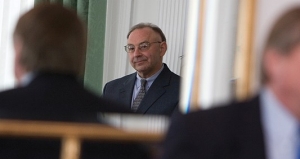 ''Collaborations like the cancer center are the future of medical care,'' said David Stern, UC vice president for Health Affairs and dean of the College of Medicine. Photo/Katie Hageman

Cincinnati's top cancer-care providers and research powerhouses are combining efforts to take on the disease that is killing far too many in the region, and the University of Cincinnati Foundation has pledged to help fund the effort by making cancer research a focus of its upcoming fundraising campaign.

Leaders from the University of Cincinnati, Cincinnati Children's Hospital Medical Center and University Hospital announced last year they were pooling resources in an effort to strengthen Greater Cincinnati's fight against cancer and lessen the impact the disease has on all of our lives. The cancer center is being created with $60 million in seed money.

"Our vision is to establish a joint cancer center that integrates the best of all our institutions and allows coordination of cancer care across all age groups," says Arnold Strauss, UC's pediatrics chair and director of the Cincinnati Children's Research Foundation. "Our hope is that this partnership will strengthen our recruitment of more top-notch clinicians and outstanding cancer researchers to Cincinnati."

Ultimately, administrators hope the collaboration leads to a designation as a comprehensive cancer center by the National Cancer Institute, of which there are only 21 in the country.

Doctors and researchers are quick to point out the need to raise the stakes. "In southern Ohio, cancer rates per county are high across all racial groups despite greater awareness of the disease and earlier access to medical care," says David Stern, UC vice president for Health Affairs, dean of the College of Medicine.

According to the American Cancer Society (ACS), more than 4.5 million Ohioans are living with cancer. The state is ranked among the top 25 percent for cancer deaths in the country.

In addition, the ACS estimated last year that for every 100,000 Ohioans living with cancer, 210 of them were expected to die within the year -- a rate significantly higher than the national average. Nationally, about 1.4 million new cases of cancer were projected in 2007, according to the ACS. And of the millions living with cancer in the U.S., almost 560,000 people were forecasted to die from the disease in 2007. That's slightly more than one death every minute, every day from cancer.

Cincinnati's joint cancer center is led by Stern; Strauss; James Anderson, president and chief executive officer of Cincinnati Children's; and James Kingsbury, executive director and senior vice president of University Hospital. While the three institutions routinely work together on research, instruction and patient care, this innovative partnership has the power and resources to yield groundbreaking results in the 21st century fight against cancer.

"We are each good at what we do, but we can do more for our current patients and the entire community by working together," Strauss says.

Although the center is in its infancy, the directors have identified three areas of cancer research where the center hopes to make an immediate impact.

The directors of the new center also are excited about the ability to provide lifetime transitional care for patients who are diagnosed with cancer as children. By learning about what these patients face later in life, their experiences will help researchersdevelop superior care for all.

"Survival rates of pediatric cancer patients are improving," says Anderson of Cincinnati Children's. "With a closer working relationship between pediatric and adult cancer specialists, we can improve the care given to younger patients as they become older patients. It will take our program to the next level."

James Kingsbury of University Hospital says the specialized care across institutions is another huge advantage. "Our cancer specialists have dedicated groups that meet weekly to discuss individual patient cases and map out the best treatment options," he says. "Working together with Cincinnati Children's and UC will complete the continuum of care for our patients."

While the center is years away from becoming an NCI-designated comprehensive cancer center, the groundwork is being laid today. Stern is enthusiastic about what an asset the center will be to the community. "I hope this excites people," he says. "If we succeed in bringing the right people and resources on board and receive support from the community, there are no limits to what we can accomplish."

Your donation can help save lives

UC's cancer initiatives in research, clinical trials and patient care have always met with strong private support from alumni and friends of the university, as well as grateful patients. Since the joint cancer center was announced in 2007, supporters have stepped up with robust private support aimed at making the center a nationally recognized leader in the fight against cancer. The results have been encouraging and astounding.

In a span of three months, two leadership gifts were received from corporations and individuals interested in bolstering this vital partnership:

In addition, Patricia Niehoff committed $1.5 million to establish a Cancer Program Fund in her name that will support cancer-related activities. 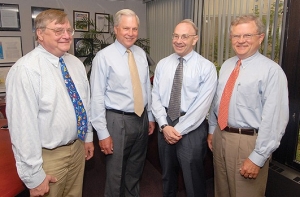 Gifts such as these are critical to fulfilling the directors' vision of a comprehensive cancer center endorsed by the National Cancer Institute. They also help attract the best talent by illustrating the community's level of involvement and interest in seeing the center thrive.

There are many ways to make a difference in the future of the joint cancer center. Funding opportunities exist to support research and education, new technology, improved facilities and faculty support.