Perfect to the core 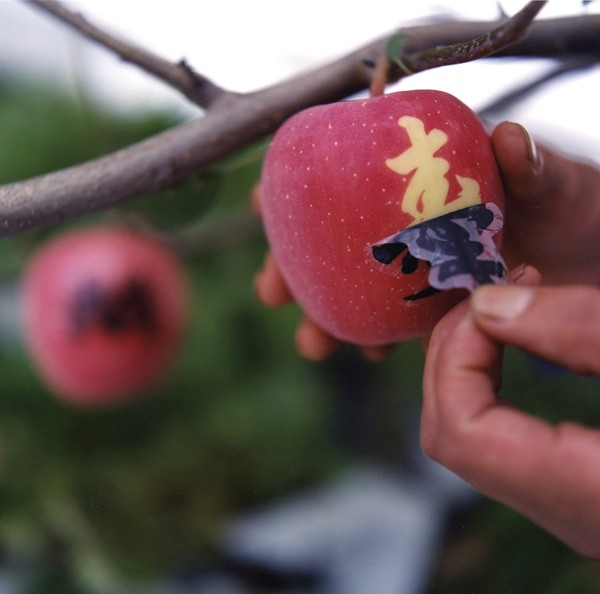 In Japan, two-layer bags are sometimes tied around individual apples to cultivate perfect fruit. Occasionally, apples grow so big that the bags split. In most instances, when all bags are removed, the apples are creamy white. At that time, silvery mats are placed under the trees to reflect the sun upward, thus tinting the bottom of the apples to match the top. On some apples, stencils are applied to the pale skin to create artistic impressions as the apples ripen. 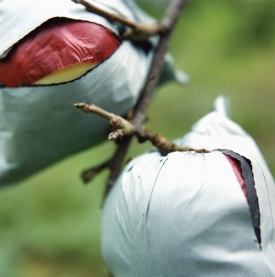 When a single Japanese apple costs as much as $150, the fruit isn't shoved into one's mouth for a juicy chomp. Instead, each apple gets placed in an elaborate box to be presented as a gift. When served, the apple is delicately sliced and served on plates, but only after everyone has admired the artwork sunburned into the fruit's perfect peel.

Admittedly, only the best apples receive such artistic adornment and inflated price tags, yet selling apples for the equivalent of $10 each is not unusual in Japan, according to fine-art photography professor Jane Stevens. "No one tosses one of these into a lunch box," she jokes. And no grocer sells them by the bag, either.

"It's a totally different way of raising apples," says the professor from the College of Design, Architecture, Art, and Planning. "From the first bloom until harvest, many farmers will have touched an apple 10 to 12 times, compared to our farmers touching an apple only once or twice, and that's at harvest time."

The work starts in the spring when farmers thin the apple blossoms. "An average tree has 4,000 blossoms, and they cull them down to 200 to 400," she says.

Each flower consists of a set of five blossoms -- one in the center, surrounded by four more, she explains. Farmers climb ladders to carefully pluck the four outer blooms, leaving only the center one. This creates fruit that is 30 percent larger than American apples, the standard size expected in Japan, she notes. 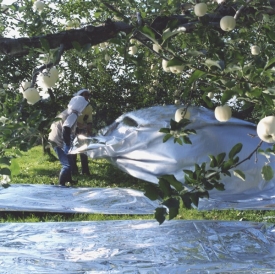 In June, while apples are still less than an inch in diameter, imperfect fruit is discarded, and the best apples are identified as ones to "bag." Farmers go back up the ladders, armed with distinctive bags made of a special opaque paper and lined with a translucent, colored wax paper, she describes. They pull a bag over each apple, pleat it in way to allow room for growth, then wire it shut so the apple receives no sunlight for three months or more. The technique keeps out pests, significantly extends the storage life and flavor of the fruit, and leaves apples a creamy white color. In the fall, farmers again climb the ladders to carefully remove the outer bag without tearing the lining.

When the wax bags are finally removed, farmers take exorbitant steps to increase an apple's exposure to the sun, thereby increasing its sugar content and giving each a uniform color. They trim branches and strip leaves from remaining branches to keep shadows off the fruit. Next, they lay silver or white mats on the ground to reflect sunlight on the bottom of the fruit. Every few weeks, they also hand-turn each piece to give all sides equal sun exposure.

Turning apples is tricky. "If there isn't a branch to rest the apple against to keep it in place, a rubber band is placed around the stem and looped around another branch to keep the apple facing toward the sun," Stevens says. "They turn the apples two or three times so all the sides match."

For the biggest, most perfect apples, they also apply sticker-like stencils to create designs on the apples' skin. "The stencils act like a high-contrast negative," the professor notes. "Some have sayings on them, such as, 'Best wishes for a long life.' Some are negatives with pictures. One Japanese pop star put his picture on apples to give his entourage for presents."

Stevens learned of the Japanese cultivation skills years ago, then conducted enough research in the states to warrant her trip to the Tsugaru region of Aomori prefecture, one of Japan's prime apple-growing regions. Regardless of her prior research, she still stood in awe of the work she witnessed in person.

"They go up and down ladders all the time," she says. "Occasionally, I saw a hydraulic lift, but usually they use ladders. I was in a state of disbelief.

"This intensive work results in apples that are absolutely beautiful and flawless. Our apples look scruffy in comparison."

An apple's size and appearance constitute the biggest factor in Japanese consumer preferences, experts told her. Nevertheless, "The apples were uniformly delicious," she enthusiastically reports. "I probably tasted at least a dozen different varieties, and they were all great, even out of season."

Developed in the 19th century, apple bagging is applied to about 30 percent of the crop, but 15 years ago, it affected 70 percent, she says. "Farmers do it themselves, but their children aren't following in their footsteps, and there aren't enough laborers to do the work."

Realizing the technique may one day disappear, she is proud to document it for posterity. But she was also shocked to discover she may be the first artist who has ever done so.

"I haven't yet found a painter, sculptor or photographer who has ever reproduced this," she says. "Even all the translators I worked with were blown away when they learned about this. They had never wondered about the bags before."

In many respects, Stevens feels as if she is preserving what could be a dying art form. "Yet the Japanese don't see it as art," she concedes. "They are simply creating the product that Japanese consumers demand. Japanese farmers can't afford not to raise a perfect apple."