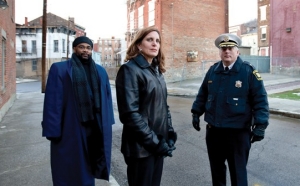 Researchers save lives by unlocking the street code in Cincinnati

The first hint that Cincinnati had even a remote chance to reduce the violence in its streets came from the transforming expressions on the very faces of the men most likely to pull a trigger.

Dozens of young men filed into a downtown courtroom last summer. It was a familiar place for Cincinnati's most violent offenders, each with a rap sheet averaging eight felonies. Only they weren't under arrest this time.

Instead, they were summoned as a condition of probation or parole to sit through a surprise "call-in session," a roundup of the city's most lethal neighborhood groups, "crews" or "posses." This was a crucial step in the new Cincinnati Initiative to Reduce Violence (CIRV), a multi-agency and community collaborative effort that appears to be having startling results, and was fueled by the findings of UC's criminal justice researchers.

One by one, the men -- mostly black and mostly in their 20s -- walked into the courtroom in July of 2007 and sat at one of the wooden court benches. Facing them was an assembly of men and women -- law enforcement officers, criminal justice workers, social service providers and community members -- hellbent on convincing their captive audience to end the bloodshed.

By the end of the tense session, the message seemed to penetrate. Dead stares at the wall and blank looks at the floor gave way to more respectful glances, even full attention. A few in the benches actually broke down in tears. And afterward, astonishingly, the phones started ringing from those who wanted out.

Within eight months of the first call-in, more than 175 had called for services, with 131 pursuing job training. Some even called from jail. Perhaps most shocking was the sheer number ready to give up their hardened ways. Experts who had implemented similar initiatives in other cities cautioned Cincinnati to expect a handful, at best, to take such positive steps.

And while it is too early to measure CIRV's long-term impact on gun violence, the number of homicides decreased sharply in the city from 89 in 2006 to 68 in 2007, the largest decline in recent memory. The number of group-related homicides from October to February dropped by 54 percent (from 26 to 12) compared to the same five-month period last year.

Those closest to the project continually point to the initial breakthroughs that are made during the call-ins, the moments when troubled young men realize their community means business. And that they care.

"It is interesting the dynamics of watching the way these 'thugs,' for lack of a better word, change," says UC criminal justice researcher Robin Engel, who helped develop CIRV. "When they come into these call-ins they are tough. They have this street image -- like this is 'BS' or they can't be bothered.

"Then the mothers (of the dead) speak. And you can see them hang their heads. They know. They can't escape the honesty of what these people are saying. "You can see their tears, especially when they say to them, 'Don't let this be your mother. This is the pain that's left behind.'"

Engel and her UC colleagues have worked closely with police agencies, the courts, parole officers and others to gather and crunch data on violent crimes in the city. What they found has proven an extremely effective tool. UC researchers and graduate students have developed social networking models that pinpoint 67 different violent street groups in the city.

Their findings revealed that these groups, though not organized enough to be called gangs, were involved (either as an offender or a victim) in nearly three-fourths of Cincinnati's homicides during a one-year period. The power of that data now allows researchers to literally generate a map of bad guys and "who has a beef with whom." Of the 1,000 individuals estimated to make up these groups, police can now name about 650 of them. And more than 15 percent are already asking for help.

Cincinnati's initiative has leaned heavily on the experts in UC's Criminal Justice department, ranked third in the country. Engel says though most people believe the violence problem in the city is a drug issue, the majority of the Queen City's killings have more to do with respect than drugs.

"It is about what it means to be a man," she shares. "It's, 'You stepped on my foot at a dance club' or 'You hooked up with my girl,' and what it means to respond to that. "The drugs are out there," she says. "A lot of them are dealing or using drugs. But the violence is not about the drugs themselves."

CIRV's premise is that the community can curb the number of homicides by disrupting the group dynamic that promotes a violent response as the method for addressing disrespect. Cincinnati's new initiative pulls in local, state and federal law enforcement to deliver a single clear message to violent street groups that says: "If you shoot someone, we know who you are, and we are coming after you."

Beyond that, Engel says, these groups also know that under the "new rules" it isn't only the shooter who gets taken down, but their "running buddies," as well.

"What we have found is that if you apply pressure to these groups, you can get them to police themselves," she says. "Basically we are taking a big spotlight and shining it just on that group with the idea being, 'If you don't want us breathing down your necks, then tell your buddy not to go shoot somebody.'"

After a shooting, reps from the neighborhood groups are reconvened and shown in graphic detail a poster with pictures of the deceased, the convicted murderers and all those related to the group who have been picked up on various drug, weapons or other charges. The idea is to reinforce that they mean business.

This type of corrective "stick" approach has proven effective in many cities. But what seems to set the Cincinnati method apart is its "carrot." CIRV relies heavily on social services and the community to reach troubled men who need a way out.

Cincinnati Works is CIRV's lead agency, which employs "streetworkers," many of them former felons and gang members, who go into the neighborhoods and spread the word about training, education and employment opportunities, as well as, substance-abuse treatment, counseling, housing and even parenting assistance.

"These guys see a whole lot by the time they are 24 or 25," says Stan Ross, program manager for the streetworker program. "A lot of them don't even think they are going to live to be 25 because of the hustle life and seeing people shot."

The message, he says, is that a violent life will lead to lonely prison sentences, pain, regret and, ultimately, death. Eventually, the social workers become personal advocates for those who desire a more productive life -- a life where they aren't likely to get shot or stabbed. For those who take the help, the transition is powerful.

"We had a couple of guys crying when they finished the job readiness program because they'd never earned a certificate before," says Ross. "They start to feel good about themselves, and they say, 'You know what, even if I lose this job, I'm not going back to the streets, because I know I'm worth it, and I know there is a better way.'"

Out of pain grew progress

UC doctor Victor Garcia, head of trauma at Cincinnati Children's Hospital, spearheaded the Cincinnati Initiative to Reduce Violence after growing tired of patching up 12-year-olds shot up with bullet holes.

"It is just unconscionable to see kids coming back with multiple gunshot wounds," says Garcia. "To a number of these kids who had been shot twice, it was just, 'Well, that's just the way life is.' But that's not the way childhood should be."

He remembers one mother in particular breaking down in his emergency room. "She was working three jobs and feeling that she had done everything she could. It was just so hard to counterbalance the group ethic that said, 'Come join me. It is OK to shoot.'"

Garcia also speaks during the call-ins. "I try to convey to them that you don't have to live your life like this," he says. "There is help, and there are meaningful consequences.

After CIRV's success, Kennedy now suggests other cities model Cincinnati's approach. It was his advice that brought police representatives from Scotland Yard to the Queen City. And today, the London Metropolitan Police are implementing the Cincinnati model. Closer to home, UC researchers will soon use state funds to take the CIRV plan to eight cities across Ohio.

"To do something in my own city where we are literally saving lives, that's such a powerful thing," says Engel. "I'm trained in statistics. Yet this is the first time that I've seen the real stories behind the numbers."