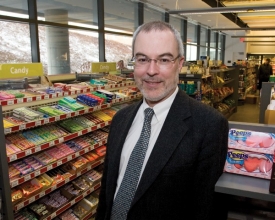 Can consumers be confused into buying? According to research started in 2004 by Frank Kardes, a professor in UC's College of Business, they certainly can.

Using real-world experiments involving salespeople and consumers, Kardes is exploring the effectiveness of a new marketing technique called "disrupt-then-reframe." His researchers found that slick retailers could boost sales by presenting a confusing, complicated sales pitch to consumers, then reframing it in a simpler way.

Instead of focusing on the positives of a product or service, as in traditional advertising, the "disrupt-then-reframe" method reduces consumers' resistance to persuasion, Kardes says. The technique is particularly effective for consumers who dislike ambiguous ideas and those who need to understand and desire "cognitive closure."

In the study, consumers were confused with an unusual price offer, 100 cents for a candy bar as opposed to $1. Kardes says the majority of consumers were persuaded into purchasing in all experiments, even when another researcher involved in the project, Bob Fennis of the University of Twente, conducted the same study in the Netherlands.

Stateside, Kardes will further test the effectiveness of the method through an experiment in which consumers are presented confusing technical information about an HDTV (1080p, 3 HDMIs), then presented with the same information in a non-technical manner (it provides an extremely sharp picture). Many salespeople first impress customers with their technical expertise, then try to make a sale, Kardes says. This is consistent with the disrupt-then-reframe technique.

A researcher since 1978, Kardes plans to conduct follow-up experiments to support the initial findings. "There are always surprises in research. I like finding out what's going on in people's heads because they usually don't know either."

Business professor Frank Kardes' research shows that when salespeople present a confusing sales pitch, and then rephrase the pitch in a simpler way, consumers are more likely to buy.

Learn more about Frank Kardes and his research