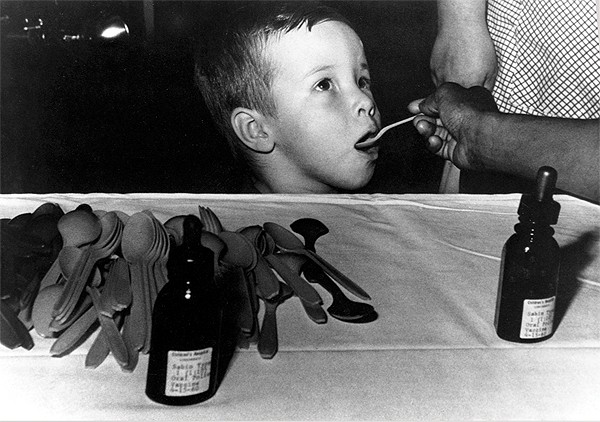 On three consecutive Sundays -- "Sabin Sundays" -- in 1960, millions of families lined up at churches and schools across the country to swallow a spoonful of pink syrup or a sugar cube treated with a life-saving polio vaccine, developed by UC researcher Albert Sabin, HonDoc '74. Cincinnati was one of the first cities to administer the vaccine following FDA approval. Previously, Sabin had tested the vaccine on his wife, two children, neighbors and 80 million people overseas.

Although Jonas Salk developed a killed-virus polio vaccine in 1953, Sabin's "live" polio vaccine became the vaccine of choice for mass immunization programs worldwide because of ease of administration, low cost and its ability to break the chain of transmission. In the end, it was credited with eradicating the wild poliovirus from the U.S., halting worldwide epidemics and preventing 500,000 deaths and 5 million cases of paralysis.

During Sabin's 30 years on the College of Medicine's pediatric faculty, he continued research into cancer vaccines, pneumonia and a number of other areas. His honors included 46 honorary degrees from universities around the world, the U.S. National Medal of Science, a Nobel Prize nomination, his image on a U.S. postage stamp, a street named after him in front of UC's Holmes Hospital and a permanent display of his work housed in the lobby of UC's Vontz Center.

In 1993, he died at the age of 87 and is buried in Arlington National Cemetery.