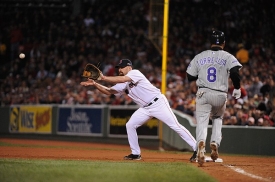 Youkilis' Gold-Glove performance in 2007 prompted the Red Sox to re-sign him for $3 million for the 2008 season. photo/Phoebe Sexton/Boston Red Sox

Before earning two World Series championships in four years with the Boston Red Sox, first baseman Kevin Youkilis donned another pair of red socks, those of the University of Cincinnati.

From 1998 to 2001, Youkilis (or "Youk," as he is affectionately known by Boston fans) climbed into the Bearcats' record books -- owning or sharing 10 UC records, including the most games played, home runs, runs scored, walks in a career and the highest on-base percentage in UC history.

Youkilis returned to UC in November when he was recognized as one of the newest members of UC's James Kelly Athletics Hall of Fame.

"I tell you what, I'm pretty lucky in life right now," Youkilis says. "What more can you ask for? This is going to be an off-season where I just kind of sit back and count my blessings and say, 'Hey, you are very fortunate in life.'"

Brian Cleary, head coach of the UC baseball team since 1997, made Youkilis a member of his first recruiting class after discovering him at a UC baseball camp.

"I'm not shocked that he's enjoying the success that he is, because I know how driven he is," says Cleary.

Youkilis had been attending the UC baseball clinic every year since he was a little kid, all the way through his senior year of high school. Youkilis says he was hoping Cleary would give him a shot, and Cleary did just that, calling Kevin an hour after he left the camp one day during his senior year at Cincinnati's Sycamore High School.

"Brian Cleary once told my dad the greatest compliment he ever gave me," Youkilis recalls. "He said, 'Your son's going to be a millionaire some day. I don't know if it's in baseball, but he's going to make some money one of these days.'"

While at Sycamore, Youkilis helped lead his team to the 1994 Amateur Athletic Union National Championship.

Growing up a Bearcats fan, he followed in the footsteps of his father, Mike Youkilis, A&S '71, by attending UC. He also made it his goal to show his worth on the field while a part of the UC baseball program. 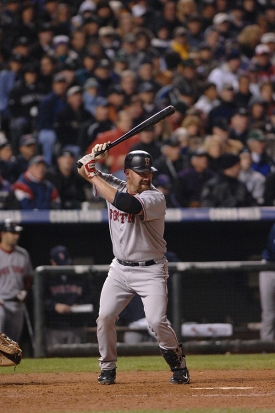 "I can't tell you the number of people that said, 'Aw, yeah, but he'll never do this or do that,'" Cleary remembers. "But he had a very intense drive to prove to everybody that he belonged."

Youkilis did more than just belong, garnering All-Conference USA and All-American honors during his collegiate career. Youkilis led the Bearcats to a school-record 35 wins in 2000 en route to an appearance in the Conference USA finals. Youkilis was the go-to man when his teammates needed him most.

"I think that on each of the four teams he played on here, guys would want him at the plate with the game on the line," Cleary explains.

The 6-foot-3-inch, 220-pound, former finance student in the College of Business has an uncanny ability to find the stitches on the ball and distinguish balls from strikes. So much so, Youkilis set the UC record for walks with 206, 40 more than former teammate Craig Tewes, Bus '02, who ranks second.

In 2003, Youkilis' talent was recognized by author Michael Lewis in his book "Moneyball: The Art of Winning an Unfair Game." Lewis referred to Youkilis as "Euclis, the Greek God of Walks."

"He had a great eye at the plate," says Brad Meador, associate head coach and recruiting coordinator of the UC baseball team. "He hardly ever struck out looking. When he did, you knew the ump missed the call."

Youkilis became the highest draft pick in school history when the Boston Red Sox selected him in the eighth round in 2001.

After a stint in the minors, which included being named the 2002 Minor League Player of the Year and tying the minor-league record for consecutive games in which a player reached base with 71 in 2003, Youkilis made his major-league debut on May 15, 2004 (the year Boston won its first World Series in 86 years).

"I didn't sleep much," Youkilis says of his debut experience. "I got about four hours of sleep up in Toronto. They told me the night before I was playing. We have a great manager in Terry Francona, and he tells us when we're playing. I got in there, and man, I was just amped up and excited."

Youkilis went 2-for-4, including a home run in his second major-league at-bat off of former Cy Young Award-winner Pat Hentgen. In his first month with the Red Sox, Youkilis was named the American League Rookie of the Month.

Youkilis appeared in 145 games during the 2007 regular season, batting .288 with 35 doubles, 16 home runs and 83 RBI. He was a key contributor to the Red Sox postseason, particularly the American League Championship Series against Cleveland when he set several offensive records for a seven-game series. His 135 straight errorless games at first base last year even won him the Rawlings Gold Glove Award.

Being a professional athlete brings with it much more than personal accolades for the former Bearcat. His charity, Kevin Youkilis' Hits for Kids (youkskids.org), benefits youth in New England. Youk says he would like to eventually expand the effort to help kids in Cincinnati, as well.

"When you go visit kids in the hospital or you go help out and you see something done, you feel like you've given back to the community," Youkilis says. "It's an adrenaline rush.

"It's like winning the World Series. You get excited, your heart races, and you feel like your day is complete."

Friday, June 13, 2008, the Boston Red Sox are scheduled to play at Great American Ball Park and take on the Cincinnati Reds. The match-up has Kevin and the entire Youkilis family excited, including his mom, Carolyn.

"We're actually going to try to get a big group together and maybe have a family reunion," she says. "We'll be Red Sox (fans) all the way."

Reprinted with permission of the UC News Record, for which Keith Jenkins is the editor-in-chief.

Other famous athletes and coaches from UC