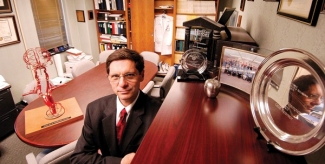 UC neurologist Joseph Broderick could have been a cardiologist. In fact, during his residency, heart surgeons who recognized his skills tried to talk him into joining their field. Photo/Dan Davenport

They called it the "Lazarus Effect."

One minute, patients couldn't walk or talk. The next, they were regaining both mobility and speech. It was 1987, and for the first time in medical history, victims of acute stroke were responding to treatment. Dead brain cells were seemingly coming back to life.

"We saw people get better from severe deficits that we had never seen before," recalls UC neurologist Joseph Broderick, MD '82, who helped lead the world's first trial of the drug that still remains the only FDA-approved treatment for opening clogged arteries in stroke patients.

"Those were very exciting days," says Broderick, now UC chair of neurology. "To see somebody who can't speak and can't move recover on the table, that's one of the best experiences I can imagine."

He and a handful of UC clinical researchers at University Hospital conducted the breakthrough stroke study in the late '80s using the clot-busting drug called tissue plasminogen activator or tPA. Up until then, tPA had been used successfully by cardiologists to clear blockage, but it only reduced damage to the heart if given within hours of cardiac arrest symptoms.

For their study, the UC team developed a similar trauma model for stroke, the third leading cause of death in the United States. It was a novel approach to a previously untreatable disease that had never been given every-second-counts urgency. In the end, Broderick's trial team discovered that tPA, when injected in a vein within 90 minutes of stroke onset, could seriously reduce or minimize brain damage.

"In the early days, we used a big old cell phone that you plugged into your car lighter, and we'd hand off the cell phone box to the person on-call the next day," says Broderick.

As soon as the on-call doc got word of an ischemic (blocked-artery) stroke, they hustled to the hospital, calling on their way to set up a CAT scan, alert the pharmacy to mix up the drug and even gain permission from family members.

"We would often come down to the 86th or 87th minute with the drug in hand and pushing it in," he says. "I remember going to the international stroke meetings and people saying, 'There is no way you can treat somebody in 90 minutes.' And we'd say, 'Well, we are doing it.' Nobody had ever changed the system in that way."

Today, thanks largely to UC-developed methods for assessing and treating stroke, the trauma-model for treating the disease is taken for granted around the world. But two decades ago, it was revolutionary.

The heart is a wonderful organ, but it's a pump... . If you don't have the pump working you can't live. But if your brain's not working, you fundamentally change who you are and what you can do.

"Sometimes with science it isn't so much that somebody is smarter than somebody else, but just more willing to change and do things differently," says Broderick.

After years of testing tPA, the FDA eventually approved it in 1996 for treating ischemic stroke (which represents 85 percent of strokes). "I still remember the definitive results meeting (1994). We were all around this big table, and there was just this tremendous cheer in the room with people throwing up papers. You walked away from that meeting saying, 'No matter whatever else you do in your career, this is going to make a huge difference. You felt like this was going to change medicine."

Greg Knight, a 45-year-old plumber, was in the middle of a routine Monday morning job when it hit him. At first he felt lightheaded, then he lost the ability to speak. He had no idea he was having a massive stroke. Fortunately, someone on the scene called 911.

A massive blood clot had blocked the neck artery leading to his brain. Without fast action, he would likely have died or been left paralyzed. But prompt attention by a network of healthcare pros in Cincinnati not only saved Knight's life but also allowed him to return to work within the week.

Recognizing the signs of acute stroke, the paramedics on scene alerted the Greater Cincinnati/Northern Kentucky Stroke Team, the largest regional stroke team in the world. A UC neurologist specializing in stroke treatment arrived at the hospital the same time as Knight and started treatment with tPA, a clot-busting drug proven to open arteries and save brain cells.

Knight's example is one of a thousand such cases a year in which the regional stroke team might just make all the difference. EMS and emergency room personnel in Greater Cincinnati are now conditioned to page the Stroke Team whenever they see a patient soon after a severe brain attack.

At that point, the alert signals around 60 Cincinnati-area neurologists, emergency room docs, neuroradiologists and nurses on call around the clock. They are all part of a group that serves 15 area hospitals in person and advises another 20 in the region.

"Every second counts," says UC neurologist Joseph Broderick, director and one of the founders of the stroke team. "We know that the longer the artery is closed, the more brain cells are dying. You are literally losing millions of brain cells every minute.

"Past a certain point, even if you open up the artery, the brain is already dead. You've only got a couple of hours. If they come in the next day, you can't do much."

In addition to responding to emergencies, the Stroke Team, based at the UC Academic Health Center, meets once a week to review cases and consider new ways to further stroke prevention and treatment. What started as a small stroke strike force in the mid-'80s has evolved into a commando of multidisciplinary brain-attack experts who have revolutionized the way an entire city -- and now much of the world -- views stroke.