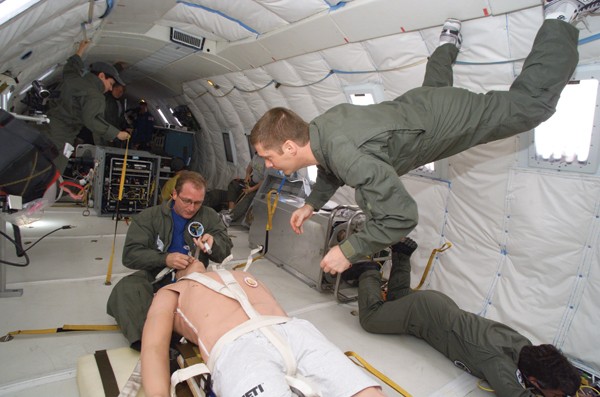 Riding in a DC-9 that the National Aeronautics and Space Administration uses to simulate weightlessness, UC surgeon Timothy Broderick floats above a patient mannequin while testing surgical robotic technologies that may eventually be used to treat injured soldiers during transport or even sick astronauts in space. 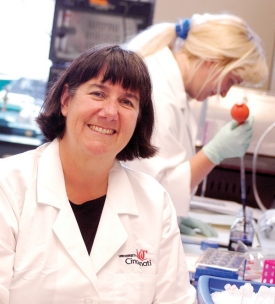 Everyday tens of thousands of UC faculty, staff and students wrack their brains trying to save your life … or at least make it more enjoyable. Last year, their efforts were impressive enough to attract $333.5 million from the government and corporate partners, such as Procter & Gamble, General Motors and General Electric's Aviation Division.

In short, the University of Cincinnati is becoming a research powerhouse. One-third of its budget goes toward research, and national rankings place UC in an enviable position. The National Science Foundation, for instance, ranks UC among the top 30 public research universities and 50th nationally among all universities, based on federal expenditures. Similarly, the National Institutes of Health (NIH) ranks the College of Medicine 19th among public medical schools, based upon research expenditures, placing it ahead of Ohio State University.

"We have nice numbers," says Sandra Degen, UC's vice president for research. "We don't toot our horn enough, but we win major grant competitions every year, and we're getting more industrial support all the time. It's an incredible amount of money -- a number that puts us in the big leagues."

President Nancy Zimpher agrees. "In terms of research excellence, we are one of the top research universities in the country," she says. "We're in good company at that level, and it's impressive. We should take a lot of pride in the major research enterprise that the University of Cincinnati represents."

Unfortunately, alumni and the public often overlook the university's research efforts, Degen realizes, but that is partly because much of it occurs in quiet ways. "Lots of times, what we do is really basic," she says. "It's incremental. Discoveries build on each other. "The goal is to translate our discoveries for the public good. We do that through publications, presentations, patents and licensing our intellectual property to industry." Those avenues may sound pretty dry, but it is indeed such presentations and patents that help eliminate disfiguring diseases, provide creature comforts and enlighten minds. In decades past, two UC researchers changed life as we know it -- alumnus George Rieveschl invented the first FDA-approved prescription antihistamine (Benadryl), and faculty member Albert Sabin is credited with eradicating polio in the U.S. by developing a live-polio-virus vaccine. (See related coverage on page 48.)

At the most fundamental level, "research is about knowledge creation," Degen notes. "It's about being inquisitive."

Institutions of higher education, of course, are expected to engage in research. "Most universities have three missions -- education, service and research," she says. "And universities must do research if they have graduate students."

Most recently, UC has begun to expand that student-researcher relationship to include undergraduates. A new Office of Undergraduate Research is coordinating research opportunities for pre-baccalaureate students in more than 250 programs. Last summer, nearly 150 undergraduates came to UC from across the country to work one-on-one with UC investigators.

"Our goal is to get students so excited that they'll want to go to a graduate or professional school," Degen says. "That's how I got into research. I worked in someone's lab when I was an undergraduate, and it sparked my interest."

Undergraduate opportunities are part of the reason chemistry freshman Mostafa Ibrahim of Indian Hill turned down Yale for UC, as he told Time magazine. "I think UC offers considerably more undergraduate research opportunities compared with Yale or Columbia, because it's a public school and a big research institution," he said. "I'm already finding opportunities for research." 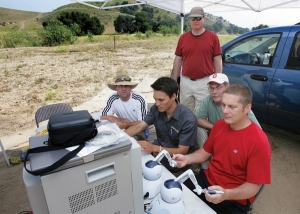 "We're training the next generation of scientists," Degen says. "The students love it, and as faculty, we love having undergraduates in our labs because they're curious and enthusiastic. They ask questions we haven't thought about for a while."

Last fall, the College of Engineering took the blossoming undergraduate-research concept a step further in initiating a co-op research certificate program, which allows students to tailor their cooperative-education experience to match career goals in research, teaching or medicine. To accommodate the latter, it permits dual enrollment with the College of Medicine.

These students will graduate with a year and a half of research experience on their resumes, says Ed Grood, research co-op director. Some students are already conducting peer-reviewed research with internationally renowned experts at P&G. "They are actively participating and contributing to research, rather than just watching it," he says.

Another boon to UC research will be the new Center for Academic Research Excellence/Crawley Building due to open soon on the Academic Health Center campus. Attached to the existing Medical Sciences Building, the nine-floor structure will add 240,000 square feet of laboratory, education and quality-of-life space.

Although 80 percent of UC research occurs on the medical campus -- and most of that through the College of Medicine -- colleges on both campuses are working together more frequently now. "It's all about interdisciplinary research these days -- working across disciplines," Degen says. "That's where we can do cutting edge research."

Having 14 different colleges allows UC to approach research differently than many universities. Students from engineering, medicine, business and design, for example, can bring broad perspectives to collaborative projects.

"Plus, people get rejuvenated when they apply their skills to another area," Degen points out. "They get so enthusiastic. It creates a synergy that's very unique."

Because major companies also watch that synergy, UC research has a significant economic impact on the area, says Dan O'Neil, associate director of UC's Intellectual Property Office. Commercial decisions on building new facilities in Greater Cincinnati often take into consideration the high quality of UC's research and the workforce it produces, he says. Corporate VIPs sometimes come to campus and meet professors to discuss both their research and the talent of their students before final recommendations are made to the home office.

That kind of focus is a new one, O'Neil notes. "In the past, if a company were looking to locate in an area, its advance team would look at infrastructure -- roads, available building sites, power to suit their needs and adequate space. Now, the first people sent in are often the human resource people. They want to know about local talent, researchers and availability of trained people of all sorts in the area.

"What they've discovered, I believe, is it's a lot easier to build a building than it is to build a world-class research university." 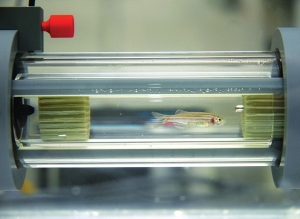 Medical firsts and discoveries at UC

First live-virus polio vaccine -- In the '50s, the late pediatrics professor Albert Sabin developed the first live polio vaccine, which is credited with eradicating polio from the U.S.

First genetics center funded -- UC has the nation's first federally funded Center for Environmental Genetics (established in '82), where professor Daniel Nebert identified genes on a human chromosome that are key to lung-cancer development.

Study of birth defects pioneered -- The late pediatrics professor Josef Warkany, HonDoc '86, is regarded as the "father of teratology" (the biological study of birth defects), and his book "Congenital Malformations" ('81) is considered a medical classic, as it was the first to associate causes, not mere chance, with birth defects.

Organ transplant discovery -- In 1989, UC researchers discovered how to make a drug work more effectively to prevent rejection of a transplanted organ.

Cancer gene discovered -- In 1995, UC researchers isolated a gene that leads to an increased risk of colon cancer, which may lead to understanding how people inherit a predisposition to the disease.

Lead effects in children -- UC was the first university-based research facility to become nationally known for studying the health effects of lead in children, and the environmental-health department was one of the first to test a drug that effectively removed high lead levels from the bloodstream.

Sniffing out disease -- UC researchers Robert Frank and Robert Gesteland invented a test to measure how well a person can detect an odor, which in turn can flag brain damage early in the progression of Alzheimer's and Parkinson's diseases.

Saving preemies -- UC pediatrics professor Jeffrey Whitsett identified a protein that was both vital for lungs to operate and lacking in babies born early, which led to a routine treatment for immature lungs and respiratory distress syndrome in premature infants. The groundbreaking treatment is saving babies worldwide. 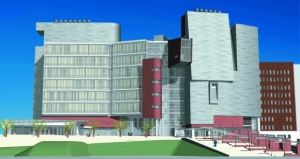 A rendering of one of the largest health-science research complexes in the country, the new Center for Academic Research Excellence/Crawley Building is connected to the Medical Sciences Building.

Nationally, UC is ranked high in many research areas, as determined by these organizations and publications:

No. 2
Nanotechnology education -- by Small Times magazine, based upon all programs Biological sciences -- by Academic Analytics, based upon faculty scholarly productivity among more than 7.400 doctoral programs in the country

No. 4
Pediatrics -- by U.S. News & World Report, based on graduate programs

No. 5
Real estate -- by Journal of Real Estate Economics, based on the quality of faculty research coming out of UC's Real Estate Center

No. 9
Biomedical sciences -- by Academic Analytics, based upon faculty scholarly productivity among doctoral programs 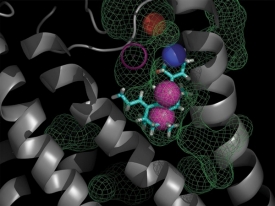 Computational models of proteins and binding sites, like his one, help UC researchers develop new drugs for viral infections.

10 more things you may not know about UC research

1. National research leader -- The National Science Foundation ranks UC among the top 30 research institutions and 50th among all U.S. universities, based on federal expenditures, and the $333.5 million that UC and its affiliates received in total research funding last year was an all-time high.

7. Safety conscience -- UC is fully accredited by the Association for the Accreditation of Human Research Protection Programs to assure safeguards are built into every step of research projects.

9. One of 20 in the world -- UC was one of 20 universities from around the world to compete in the Solar Decathlon competition, in which students from engineering, design, business and A&S designed and built a completely solar-powered house -- one that was innovative, workable and economically feasible.

10. $420 million gift -- In October of 2007, UC received an in-kind gift worth more than $420 million, the largest in UC history, when a consortium of international companies designated it as the state's first PACE institution (Partners for the Advancement of Collaborative Engineering Education). The gift of high-end design and engineering computer tools enable students and faculty to design hybrid vehicles, buildings, efficient factories and, eventually, innovative medical devices, then visualize their designs in 3-D and simulate bona fide tests for strength and movement.