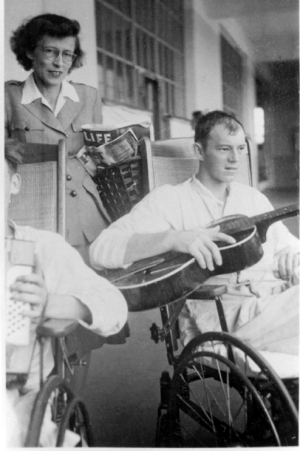 PHOTOT GALLERY -- 1/16 -- The guitar player is a GI amputee recovering in the university's 25th General Hospital when it operated out of Tongres, Belgium, shortly after the Battle of the Bulge. Distributing reading material behind him is Barbara Lincoln Ashbaugh, A&S '35, whose photos and memories constitute a large portion of this article. photo/Barbara Ashbaugh and UC Libraries

During the summer of 1941, before America entered World War II, the U.S. Army asked the University of Cincinnati to organize the 25th General Hospital as a major medical facility in the European theater. Staffing the hospital were 57 medical officers and 85 nurses, mostly affiliated with UC and Cincinnati General Hospital (now UC Health University Hospital), as well as 500 enlisted personnel, all of whom served with distinction in England, France and Belgium until the end of the war.

At issue was an urgent need for doctors to serve in the armed forces while leaving enough physicians at home to care for civilians. In 1940, for instance, the Navy and Army had only 2,386 medical officers. By the time of the Pearl Harbor attack in December 1941, that number had increased to 13,000, and one year later, it had more than tripled to almost 42,000.

In June 1943, the 25th was ordered into active military duty, with officers and enlisted personnel receiving training at Fort Knox, Ky., where they learned to set up and operate a general hospital under field conditions. In December, the unit embarked for the European Theater of Operations, arriving first in Scotland, then moving by rail to Stockbridge, England, its initial site of operations.

There, the unit occupied a hospital that the British had supplied to the U.S. in preparation for the worst possible German air blitz. Anticipating large numbers of casualties, the staff of the 25th conducted experiments constructing tented and semi-permanent hospitals. 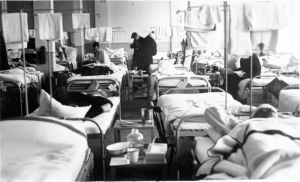 This 60-bed ward was located next to surgery, according to an unknown photographer who wrote on the back of the photo. "It was ideal for sorting and shock treatment of acute cases prior to surgery." photo/UC Libraries

Less than three months later, in March 1944, the unit moved to another hospital in Cirencester, England, primarily treating the American sick and wounded. Two months after that, the 25th went through a series of temporary moves leading to its attachment to the 1st Army and deployment to France on July 29, almost two months after D-Day.

Arriving on Utah Beach (the western- most beach of the Normandy landing), the 25th moved to nearby Lison, where it established a 1,000-bed hospital in tents set on concrete bases. The hospital officially opened on Aug. 15, 1944, treating 3,104 patients over the next three months, including many German prisoners.

Barbara Lincoln Ashbaugh, A&S '35, an American Red Cross psychiatric social worker with the 25th, had a typical reaction to the wounded Germans. "I was struck by the ages of the German prisoners on our wards, for most were young boys in their teens, and they looked like our men," she recorded in her diary. 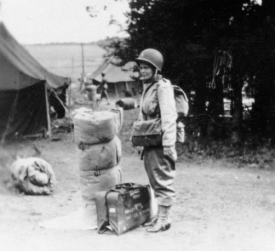 Beginning in May 1942, College of Medicine dean Stanley Dorst and colleagues selected physicians and nurses from the staff and graduates of the colleges of nursing and medicine to serve in the 25th. Here nurse Stella (last name unknown) prepares to leave England for France, "complete with 18-inch bedroll and helmet," as Ashbaugh described. photo/Barbara Ashbaugh and UC Libraries

But humor sustained her in Lison. Near the tent hospital resided a herd of cattle. "One cow disturbed my sleep in the middle of the night," Ashbaugh wrote, "when she stumbled over the tent ropes next to my bed. I awoke with a start and heard a mighty moo as she stumbled off into the dark."

On Nov. 29, 1944, the 25th moved to what was expected to be a more permanent location in Liege, Belgium. The city, however, was under intense attack from the Germans with as many as 140 V-1 "buzz" bombs falling on the city in a single day. Within weeks, the major German offensive known as the Battle of the Bulge would descend upon Belgium.

Subsequently, a more suitable location for the hospital was found 12 miles northwest in Tongres, Belgium -- a five-building-barracks complex in need of extensive reconstruction after being largely destroyed by the Germans. In the meantime, the 25th bivouacked nearby in an unoccupied girls' school for a month. In March, the 1,250-bed hospital in Tongres was operational.

Because the facility was only half a mile from the railroad station, as many as 300 wounded soldiers could be un-loaded from trains, transported to the hospital, admitted and in beds within one hour and 45 minutes. Patients only stayed for 10 days to keep beds available. Anyone unfit to return to duty was evacuated to England or continental hospitals farther from the front. 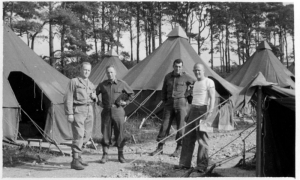 In June 1944, these doctors -- Edward "Red" Elsey, Dudley "Dud" Wolfe, Max Haas and James "Jimmy" Mack (in unknown order) -- waited in North Tidworth, England, to be transferred to Europe after D-Day. Setting up 529 tents on concrete bases to form a hospital in Lison, France, became difficult in August 1944 when continual rain created so much mud that trucks became trapped.

During the Battle of the Bulge, the cities of Liege and Tongres were particularly crowded with wounded because their location was only miles from the front. Although the 25th's own hospital was not yet operational during the battle, unit members served on detached service with evacuation hospitals and other general hospitals.

In August 1945, the 25th moved to the Army Hospital in Rouen, France, which it operated until Sept. 21, a few weeks after the war officially ended. On Nov. 20, the 25th General Hospital was deactivated.

Veterans of the unit were entitled to wear three battle stars on their European Theater service ribbon for the campaigns of Northern France, Rhineland and Ardennes (Battle of the Bulge).

The 25th performed bravely and made its mark on military medicine through creative efficiencies that shortened the time from injury to treatment, practices that were emulated by other units. 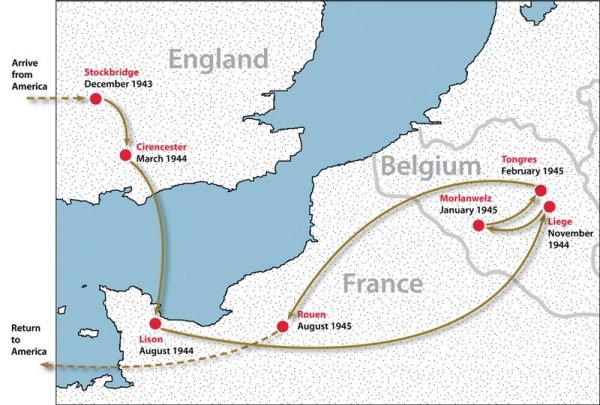 "The science of war has left a legacy to the science of peace," said pediatrician A. Alexander Weech in addressing the 1946 graduating class of the UC College of Medicine. He recounted the following as the college's most impressive medical advances that both facilitated the war effort and had lasting peacetime impact. 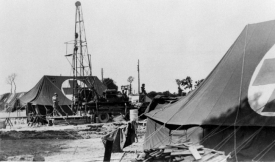 "They drill for water at the hospital site," wrote Ashbaugh about their location in Lison, France. "Water to drink was finally located through a 'water witch.' Meanwhile we drank treated water from a Lister bag"(a canvas bag to hold such water). photo/Barbara Ashbaugh and UC Libraries

Samuel Rapoport and Paul Hoxworth (for whom UC's Hoxworth Blood Center is named) devised new methods for the preservation of blood, allowing it to be shipped to any region of the world.

William Altemeier was the first to show that acute osteomyelitis (bone infection) is usually best treated with penicillin as opposed to surgery.

Albert Sabin (pediatrics) led research that resulted in vaccines for Japanese B encephalitis and that made great strides in vaccines for two other tropical diseases, sandfly and dengue fever.

Commended for meeting the challenge 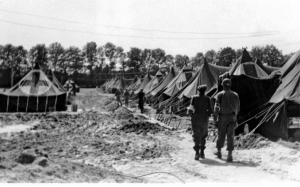 Setting up 529 tents on concrete bases to form a hospital in Lison, France, became difficult in August 1944 when continual rain created so much mud that trucks became trapped. photo/Barbara Ashbaugh and UC Libraries

"You are one of a group of general hospitals whose personnel has been called on to function under circumstances probably never faced prior to this war by general hospitals. These circumstances have been brought about by enemy action and by the necessity of moving general hospital units up to the fighting front. You have been called on to adapt a general hospital in such buildings as were available and at the same time maintain the superior medical service which has been standard in this theater. Due to the necessity for beds, you have been forced to move, set up your hospital and operate rapidly. Your unit has met every challenge and has carried its full share of the work which has helped to create the superior record made by the Medical Department in this theater."

Copy and photos are part of a major project by the Henry Winkler Center for the History of the Health Professions, UC Libraries.

Project supported by a gift from Col. J.N. Pritzker, Illinois Army National Guard (ret.), president and CEO of Tawani Enterprises, founder and chair of the Pritzker Military Library in Chicago, and founder and president of the Tawani Foundation.

Steve Marine is executive director of the center.

Video: Silent film “Along the War Path” (in 4 parts) by alumnus Jean Stevenson (see photo below)

Alumna Barbara Ashbaugh writes a letter for a patient, an amputee in Tongres. [+] 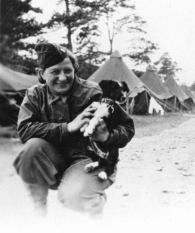 “Stella” and a dog in Fargo Plains, England, in 1944. There hospital staff staged and prepared for movements. [+]

Ashbaugh helped acquire this French ambulance for the 25th at Lison and tried to find tires for it at the local junkyard. [+]

Patients being carried from the ambulance into the hospital in Tongres. [+] 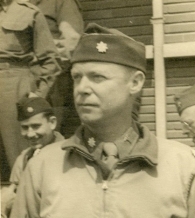 The 25th’s chief of surgery was Jean Stevenson, Med ’30, MD ’31, surgery professor at College of Medicine. He created the silent movie linked above. [+]