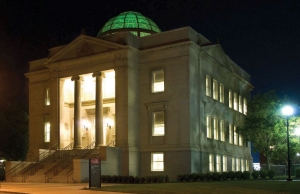 Staff at University Archives can answer questions such as the date that the Van Wormer building lost its original dome (1930) and the date it received its replacement dome (2006) with its rotating colors. photo/Dottie Stover [+]

Each time the doorbell chimes at the University of Cincinnati’s Archive and Rare Books Library, a new search begins. Whether a student, administrator or scholar from halfway around the world, they all hope we hold the pot of gold at the end of their search. And sometimes we do.

What’s the gold? Well, that would be the facts, history, photographs and documents that chronicle UC’s past and present. And it is all in the University Archives.

While all are welcome to schedule a visit, perhaps I can save a few trips to the eighth floor of the Carl Blegen Library by sharing answers to some of the more common inquiries that grace our stacks.

One of the most frequent questions thrown at us is if we have materials all the way back to UC’s origin in 1819. We do, but that question is often followed by an observation that certain buildings on campus actually feature a crest showing the university’s founding as 1870. So which is it?

To trace UC’s roots back to 1819, one starts with the predecessor school Cincinnati College.

Originally consisting of an academic department, a law school and the Cincinnati Observatory, Cincinnati College had considerable ups and downs in the 1800s. At the close of the 19th century, the law school was all that remained of that college.

In 1870, the city of Cincinnati established the University of Cincinnati, which later absorbed earlier institutions. By 1896, UC had created its own law department, and the next year, a merger was begun with the law school of the Cincinnati College. In 1918, the full merger came about, and suddenly UC had a legitimate pedigree back to 1819.

Who helped shepherd that initial blending of legal training? It was the redoubtable William Howard Taft, whom we can claim as an alum because of his tenure at the Cincinnati College Law School, first as a student and then as dean.

Through Taft’s considerable mediation skills, the merger of UC and the law school was done before he moved on to the national stage as secretary of war, president of the United States and chief justice of the Supreme Court. It was in this last position that he is portrayed in the bronze statue on the east side of the College of Law. And he’s smiling. That is because Taft was most happy being a jurist.

Pushed, more or less, into presidential politics by his wife, Helen Herron Taft, and by his predecessor, Theodore Roosevelt, Taft was often unhappy, and when he was unhappy, he ate. Serving as president from 1909-13, Taft had a considerable girth at the end.

Once out of the office, he relaxed a bit, and at one point wrote to a friend and said that he knew he was happier because he could button his own trousers without the help of a valet. So the statue has a pretty fair likeness of him. (See related story on Taft.)

What of the buildings on campus? Archives staff members are peppered with questions about now-gone Beecher Hall (replaced by University Pavilion); the TUC Bridge in the halcyon times of vendors, preachers, booths and laughter of student crowds; McMicken Hall (yes, the original had a gymnasium in the basement that the basketball team used); or the current dome on Van Wormer (not the original, but certainly an attractive one with its many rotating colors).

Incidentally, the dome’s colors are best viewed in winter and from the bottom of the lawn in front of McMicken Hall. Given that during winter, so many UC employees arrive in the dark of the morning and go home in the gloom of evening, the colors are a nice respite from seasonal doldrums.

The broader questions are common as well, concerning formal campus plans, the construction of classrooms and laboratories and the blending of the campus into the Clifton and Corryville neighborhoods.

That notion of community integration is a large part of the archives. The university has always been an integral part of the city of Cincinnati, beyond the fact that UC was a municipal university for most of its existence.

On one hand, the university’s academic programs, its involvement in civic affairs and its research and medical missions through faculty, administrators and students are all documented in the archives, commonly in the form of student newspapers, yearbooks, faculty publications and administrative reports.

On the other hand, there are also the archival collecting areas known as the Urban Studies Collection and the Local Government Records Program. These collections of community programs and institutions, as well as of civic governing bodies, contain a wealth of information on the ties to UC, be they in art, architecture, planning, social work or politics.

The latter, for instance, contains the papers of Theodore Moody Berry, A&S ’28, Law ’31, one of UC’s most prominent graduates, Cincinnati’s first elected African-American mayor and a key figure in national civil rights efforts. Also the holdings of the Contemporary Arts Center and the Better Housing League offer further evidence of the great involvement by UC students and faculty.

And where would you go for information on the city’s ballet heritage? To the archives, of course. The records of the Cincinnati Ballet and of UC’s College-Conservatory of Music dance division are linked in history and in performance.

What a researcher should really know about the University Archives is that beyond the rich collections, there are the investigations and interpretations by a dedicated network of people who share their findings with others. For example:

In short, University Archives really does offer a pot of gold for anyone willing to go digging.


Kevin Grace, MA (A&S) ‘77, is UC’s head archivist and an adjunct assistant professor for the University Honors Program. Call 513-556-1959 to schedule a visit to use collections within University Archives.