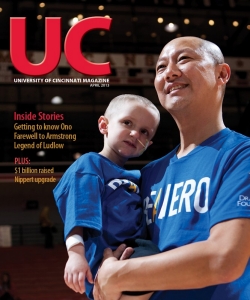 UC President Santa Ono holds Katie, a young cancer patient, soon after having his head shaved in front of thousands to help raise funds for the Dragonfly Foundation. Photo/Ashley Kempher

In this issue, we share things you probably never knew about UC’s newest president, the university’s most famous faculty member, a Ludlow Avenue dorm, an elephant on campus, unusual campus research and more than you ever thought to wonder about.

Life in a Hitler labor camp
Student and alumna spent summer in Hitler’s labor camp so they could write about it.

The Taft influence
One Cincinnati family’s long-lived impact on UC, the community and beyond.

Pot of gold closer than you think
University Archives is a treasure trove of inside stories, documents, photos.

On Campus Yesterday
1902: An elephant moves in on campus 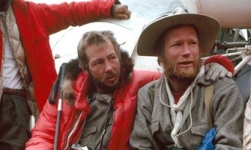