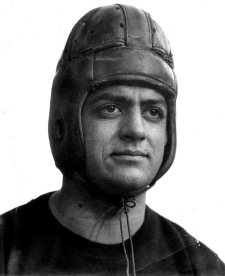 Jimmy Nippert, the namesake of UC's stadium, in his leather football helmet, 1923

A deep cut. That was it. An ordinary injury became the extraordinary reason why the University of Cincinnati’s football stadium has been called Nippert for almost 90 years.

It was not because a guy named Nippert donated a ton of money. And it has nothing to do with whether or not a body is buried under the commemorative granite marker at the south end of the stadium. (No one is buried there.)

To understand how a deep cut could generate nearly a century of naming rights, travel back to Thanksgiving Day 1923 -- a time before protective gear and antibiotics. The driving rain on the field was continuous and overwhelming. UC’s Carson Field that day was called a “sea of mud.” The players’ jerseys and leather helmets were so completely mud covered that fans in the stands were not sure which players were Bearcats and which were Redskins.

The matchup between old rivals UC and Miami University, Ohio (whose team is now named the Redhawks), was the last game of the season for what the Cincinnatian yearbook called “the most successful football team [UC] has had during the last 15 years.”

No one seems to know when during the game the injury occurred. Perhaps a defensive lineman plowed through the middle, stepping on UC’s center. Regardless, a football cleat sliced the Bearcat’s leg. The gash was quickly coated with mud and went unnoticed. In the end, UC triumphed 23-0.

This photo from the Cincinnatian yearbook depicts the muddy conditions on the field during the UC-Miami game in 1923.

Like most linemen, that center -- James Gamble Nippert or “Jimmy” -- was largely ignored by the media. Those worthy of mention in the University News student newspaper were in flashier positions or had earned nicknames like Arthur “Tank” Fratz, George “Runt” Bradner or team captain Fred “Red” Prather.

By all accounts, Jimmy Nippert was a solid center for the team in 1922 and ‘23 while he studied law at UC. After the cleat slit his leg, he “did not realize the gravity of the injury and played until the end of the game,” according to the Cincinnati Times-Star.

He recuperated at the family home on Werk Road in Westwood, down the street from the house of his grandfather and namesake James Gamble, the Ivory Soap inventor and the first son of Procter & Gamble’s cofounder.

Jimmy’s condition worsened. Since sulfa drugs and penicillin were more than a decade away from common use, he developed an infection from which he would not recover. 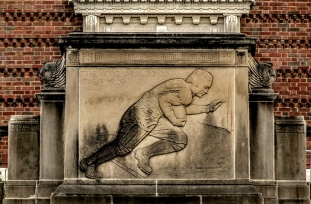 The relief on the stadium side of Nippert has what is reportedly Jimmy's last words (in the upper left), "Five more yards to go -- then drop." photo/Jay Yocis

Doctors ordered that he be admitted to Christ Hospital where teammates could donate blood for a transfusion. On Christmas Day 1923, he died. Cause of death: “septicemia following injured left leg, Football Accident,” the death certificate stated.

“Nippert’s last words,” the Cincinnati Enquirer reported, “were of the sport he loved and which cost him his life. ‘Five more yards to gain and drop,’ he murmured and died.”

Jimmy’s death clearly affected his grandfather. Gamble offered to provide the $250,000 needed to finish the stadium “as a memorial to his grandson,” the University News explained. “Conditions in the agreement provided that a fully equipped dispensary be a part of the bowl, to insure that expert and immediate attention be given any student injured on the football field.”

The James Gamble Nippert Memorial Stadium was dedicated on Nov. 8, 1924 -- nearly a year after his injury. Since then, the 12,000-seat capacity has been increased several times and many improvements made. In 2005, a permanent, end-zone grandstand and new locker rooms were added. Still, the name Nippert has always remained.

In the interim, the Nippert family continued its allegiance to UC and established a legacy of philanthropy. Jimmy’s brother, Louis or “Gus,” A&S ‘26, JD ‘28, HonDoc ‘71, along with his wife, Louise Dieterle Nippert, A&S ‘34, HonDoc ‘67, donated hundreds of millions of dollars to Greater Cincinnati institutions, including UC, schools, hospitals and arts organizations. 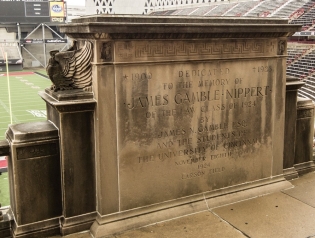 And legacy was on the mind of Maud Gamble Nippert, Jimmy and Gus’s mother, when she sent a letter in February 1924 to the University News, thanking the UC varsity squad for flowers sent to the hospital. “I know you all are glad to have helped so beautifully to make his last days happy -- for he loved his Alma Mater,” she wrote. “Don’t forget him too soon!”

Left, the granite marker at the south end of the stadium states, "Dedicated to the memory of James Gamble Nippert of the law class of 1924 by James N. Gamble, Esq., and the students of the University of Cincinnati, November eighth, 1924, Carson Field." 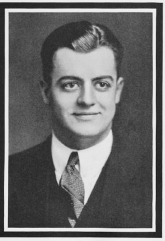 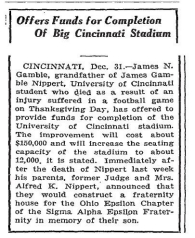 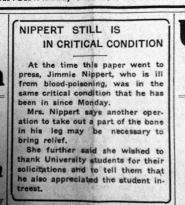 Clipping from UC's University News, Dec. 22, 1923, notes "Mrs. Nippert says another operation to take out part of the bone in his leg may be necessary." If any operation occurred, it cannot be confirmed.

From the University News, 1923 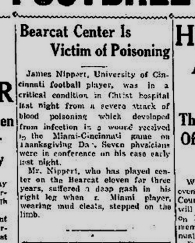 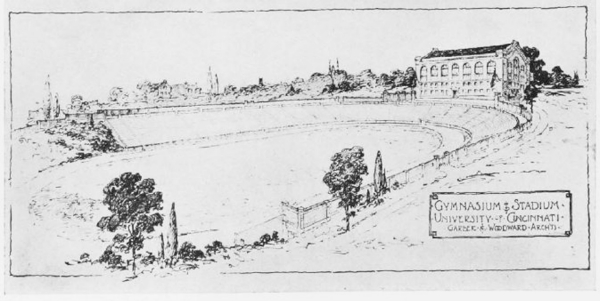 An architect's rendering of the expansion of the stadium, 1924.