University of Cincinnati Magazine letters to the editor 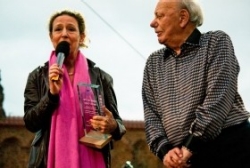 Like Sigmund Rolat [A&S ’52, “Holocaust Survivor Builds ‘Bridges of Reconciliation,”’ September 2012], I’m a survivor. I’m a little younger, but also a Cincinnati graduate (PhD in chemistry), with different, yet still very similar, experiences when I survived World War II as a child in the Netherlands.

From the various meetings that I have attended, it is interesting to note that most of those who survived have been very successful in their various endeavors in the United States. This also extends to many of the second generation, who, in most cases, are extremely successful.

In my own family, two doctors (one of whom is a graduate from the Cincinnati medical school) and one attorney seem to exemplify this, which is not unusual among our friends. To some extent, it seems our past drives us to succeed and never let it happen again.

I’m astounded how well Sigmund has been able to come to grips with the situation and survive. My way of coping has been to think and reflect as little as possible on those horrific events while realizing that it is not really a solution. Lately I have become a little more active and have spoken at my grandchildren’s schools (something I never did for my own kids) and have spoken at the Holocaust Memorial at the San Diego Naval Base.

This note is just to let you know that there were a number of survivors at the university during my days, but none of us were ever active at either the university or the Cincinnati Jewish community to make that fact known. 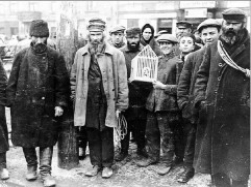 You began your recent, interesting article about Sigmund Rolat [September 2012] with the unfortunate phrase “the Nazi slave-labor camp in Poland.” From this phrase, the reader, especially younger readers, might assume that these horrible camps were Polish. As you know, they were German camps.
Many of the victims in these camps were Polish, both Jews and non-Jews. Unfortunately, by using “Nazi” instead of “German,” the identity of those responsible is blurred, and those who were victims are implied to be the perpetrators.

Prior to heading over to the press box for today’s game, I was looking at the latest edition of UC Magazine. I wanted to take a minute to tell you how much I enjoy each issue. You do an incredible job with it, and I really appreciate how you handle the stories about athletics.

Won more than a game

Last fall, we received several emails offering tickets and encouragement to attend the UC-Miami University homecoming football game. My 70-year-old memory was roused, then enflamed. Could it really be 70 years ago? Surely not!

But I remember it well: Nov. 26, 1942 was Thanksgiving Day. Of course, Dad and I had tickets for the annual UC vs. Miami game.

Dad was excited. The Bearcats had a good season and were returning to the field after a loss to the No. 1 team in the country, the University of Georgia Bulldogs, who were to go on to the Rose Bowl. Our Bearcat punter had a record 54 yards per kick in that respectable loss to Georgia, and Dad was expecting a big UC victory this time. 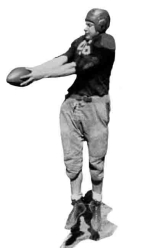 Another excited and proud Bearcat patron was Dr. Fishback. He had invited the entire football staff, team and their dates to a lovely Thanksgiving dinner at a Northern Kentucky country club.

I was excited, too. I had an evening date with the starting quarterback and punter for the UC team. This was to be our first date. And now, 67 blessed years later, I recall, that future dates were few and far between. In January, the war took my punter to Italy.

On that Thanksgiving Day, however, we beat the Redskins and won the game. We also won the terrible war. … And I won Joe [Eng ’45].

Thanks for the memories. 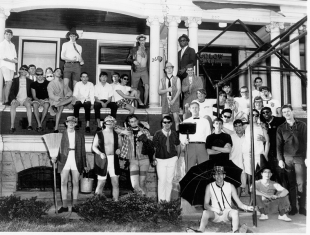 Ludlow Hall's freshman class of 1965. Craig Fitzpatrick is the "the guy in the black sweatshirt, just right of center behind the guy with the umbrella." IDs of the other students are welcome.

It was great to see my letter and the group photo of the old Ludlow Hall gang [at left] in the last issue of the university magazine. Hopefully it will be seen by some of the original gang, and you will receive more comments and photos. Thanks for sharing this in the magazine.

I have thought that it would be great if you could find Bob Deddens [Eng ’63, JD ’67], our dorm leader, or that he might see this and respond. He would have some great memories of that year and could certainly fill in some blanks with his version of reality.

Ludlow Hall: Cause to shudder twice 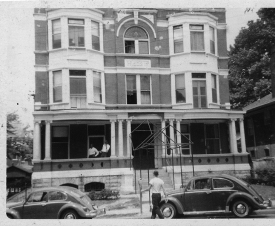 I think the editor might want to check the facts in Mr. [Craig] Fitzpatrick’s letter [September 2012] regarding his freshman class being the first to use Ludlow Hall as a dorm [in the mid-1960s]. In September 1960, I, along with my roommate, Lynn Pfersick, arrived from Indianapolis and was told that Memorial Hall was full and that the overflow of women students would be housed at the former Ludlow Hotel, 260 Ludlow Ave.

Lynn and I were lucky to get a spacious first-floor room with windows nearly ceiling-to-floor length. My mother made curtains for those windows.
We were supplied with bus passes for daily use between Ludlow and the main campus. We also had meal tickets, which we used, but occasionally treated ourselves to dinner at the Hitching Post further down on Ludlow. I still remember the banana cream pie from there.

One morning, Lynn and I were late for class, so we rushed off without straightening our room. When we arrived back at the hall, the housemother (sorry I can’t recall her name) greeted us at the door to tell us that we had embarrassed her.

It seems that Mrs. Langsam (wife of then president Walter Langsam) came to visit the new women’s housing, and the housemother went to show her our room, which had been nicely decorated by our mothers. She opened our door only to see unmade beds, clothes scattered, etc. That was the last time we left our room messy!

One last remembrance: One Friday evening, my date and I went to a drive-in movie on the west side of town. Driving home across the Western Hills viaduct, we saw a clock indicating it was almost 2 a.m. (Female students were required to be in the dorm by 2 a.m. on weekends.) By the time we arrived, it was 2:15 a.m.

Three police cars were parked at the dorm, and they shined spotlights on my date and I as we got out of the car. When I entered the dorm, the housemother told me that in five more minutes she would have called my parents in Indianapolis to report my tardiness. I still shudder to think what would have happened had my parents received that call.

Editor’s note: You indeed were among the first residents in Ludlow Hall. I knew that Craig Fitzpatrick was not entirely correct at the time, so I did a week’s worth of research and wrote a one-page article about Ludlow Hall. That story was being printed in the magazine when UC’s former president resigned.

We literally stopped the presses and had to remove content to add a news update. The one page devoted to Ludlow Hall was the perfect size and location for yanking.

The bad news: We did not clarify the letter. The good news: We had late-breaking news about the resignation and appointment of the interim president. The “yanked” story now appears in this issue. Read Ludlow Hall article. 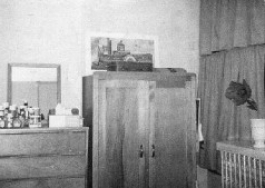 Above and below, a Ludlow Hall dorm room from 1966. Photo/alumna Patty Lloyd

In 1960, I roomed on the first floor of Ludlow Hall, as a freshman in the college of DAA [now DAAP]. I was told by the university that Memorial Dorm and all other female housing was on overload and the university had purchased a facility on Ludlow Avenue to help relieve the situation. Because the person I was rooming with, Katy Carey, DAA class of ’65, had applied late to UC, I would be sent to Ludlow Hall in order to room with her.

We were told that the house had been a “house of ill repute” and a favorite stop for truck drivers. While I was living there, the truck drivers had learned not to stop, but they still frequently honked their horns when driving by. 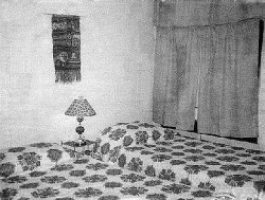 Our room was on the first floor, and the building’s back door was part of our room. The university put bars on the windows and nailed the door shut, so no one could get in or out. At night, a security guard rattled the door knob to make sure the door was still fastened. The first time this happened, Katy and I were terrified, and this became a nightly event.

At the end of the year, I moved to a sorority house to get away from the mile walk to DAA, and Katy became a DAA co-op student. I, therefore, have personal experience that in 1960 it was a women’s dorm with a housemother.

Editor's note: Be sure to read the complete Ludlow Hall story. 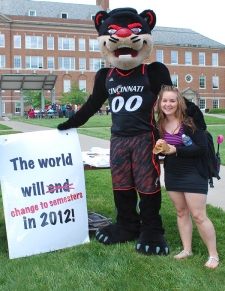 UC's students returned to campus in August 2012 to semesters instead of quarters. photo/Lisa Britton

I am a 1965 graduate, who should have been in the class of 1964. The problem was that, in 1960, I started out in the co-op system, which consisted of five seven-week school terms as a freshman and three seven-week terms in subsequent years. After my sophomore year, I switched to the semester system. But in my senior year of 1964, the entire school changed to the quarter system.

Try calculating all that as far as credit hours are concerned.

Thus, as I prepared to graduate, my adviser decided that I had completed all the required courses for my accounting major, but I did not have enough credit hours to graduate. Therefore, I spent a year at what is now Youngstown State, taking senior-level courses in which I was the only non-major in those courses.

Before the semester change takes place, I suggest that especially seniors make the time to do credit-hour calculations so that a similar problem does not befall them!

Editor’s note: Before the semester conversion took place in August 2012, UC added 21 undergraduate advising positions to help each student create an Individual Advising Plan, which ensured every student would graduate on time with no additional expenses. A Student Pledge was even put out in print. Perhaps some faculty and staff recalled what students like David had gone through.

The article about the 25th General Hospital misnamed a doctor. The correct name is Dudley “Dud” Wolfe, not the nickname “Doug,” as a caption indicates.

Editor’s note: Thanks for the correction. Someone had typed the name “Doug Wolfe” on an index card attached to the photo album belonging to Barbara Lincoln Ashbaugh, A&S ’35, and we assumed it to be correct.

Letters to the editor must relate to the university, be signed and include addresses, colleges and years of graduation, when applicable. The editor reserves the right to edit letters for length, clarity or factual accuracy and to reject letters of unsuitable content. Letters may not criticize other letter writers or insult the character of anyone else. Opinions expressed do not necessarily reflect the views of the University of Cincinnati.