How one Cincinnati family impacted UC and the city, state, nation 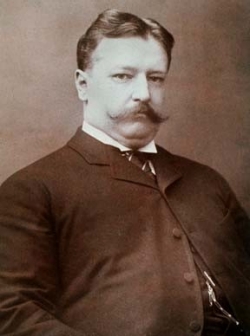 UC students have spent decades strolling by a portly statue, driving along a nearby road and visiting local arts buildings named in honor of one family.

The story behind the Taft family name is one filled with tales of power and influence. Beyond their political pull, the Tafts have also left a legacy of generosity that helps explain why theirs is a name that appears frequently across the UC campus, as well as in many locations around Cincinnati.

William Howard Taft Road is the main access to UC from the east, turning into Calhoun Avenue when it adjoins campus. Right before the road hits Clifton Avenue, it nearly runs into its namesake -- the 8-foot-tall William Howard Taft statue located behind the College of Law. Elsewhere at the university, the family name weaves through a number of programs, endowed professorships, lecture series, awards, the Taft Research Center and the residential Taft House in Stratford Heights. Off campus, the name identifies Taft Broadcasting, the Taft Theater and the Taft Museum, a National Historic Landmark that houses a popular art collection (among other things).

Who are the Tafts? Although the family roots trace back to the American revolution, the Taft history of politics and philanthropy began with jurist and patriarch Alphonso Taft, once a judge, U.S. secretary of war, U.S. attorney general and ambassador. His descendants include newspaper publishers, an Ohio governor, a decorated World War I flying ace, a U.S. president and a Supreme Court justice.

Next to make his mark was William’s half-brother Charles Phelps Taft, who had a successful law practice, owned the Chicago Cubs and served as a U.S. representative, but the profession he was best known for was as owner and publisher of the Cincinnati Times-Star.

Charles and his wife, Anna Sinton Taft, donated $75,000 to construct a home for the UC College of Law. Named for the brothers’ father, Alphonso Taft Hall was dedicated in 1925 amid great fanfare. While Taft Hall hasn’t disappeared from the corner of Calhoun and Clifton, it is no longer visible. More than 25 years ago, new construction completely enclosed the shell of the 1925 law school to create a new structure. Essentially, the core of the UC College of Law is Taft Hall.

Further commemorating the Taft name, the college annually hosts the William Howard Taft Lecture on Constitutional Law, established in 1986 to honor its first dean, the only person to have served as both U.S. president and Supreme Court chief justice.

Charles Taft was not the first to introduce wife Anna to philanthropy. Her father, wealthy industrialist David Sinton, initially instilled those qualities in her when an endowment was established at UC in 1899 to provide for the David Sinton Professor of Economics in the business college.

For more than 20 years, Sinton had shared his home, the former Longworth mansion on Pike Street in downtown Cincinnati, with Anna; her husband, Charles; their two sons; and their two daughters, including Anna Louise, whose name would figure prominently into local history one day. The Taft couple traveled around the world, amassing a collection of more than 600 paintings and works of art.

Having made a fortune in iron manufacturing and real estate, 93-year-old Sinton died in 1890, at which time the New York Times said he was “the richest man in Cincinnati.” He left Anna, his sole heir, a $20 million estate.

In 1927, two years after constructing the law building, Charles and Anna bequeathed their home and private art collection to the people of Cincinnati. After extensive remodeling and updating, their mansion opened in 1932 as the Taft Museum of Art, where College of Design, Architecture, Art, and Planning faculty continue to use the collection as a resource and inspiration. As recently as 2011, two UC ceramicists exhibited porcelains inspired by the decor and collection of the museum.

When Charles died in 1929, Anna memorialized her husband by giving UC $50,000 to endow the Charles Phelps Taft Memorial Fund, which supports studies in humanities, languages, economics and mathematics at UC, including Taft fellows and professors, as well as the Taft Research Center. Since Anna’s initial gift, the fund has grown to have an asset value of $38 million, according to the center’s annual report. 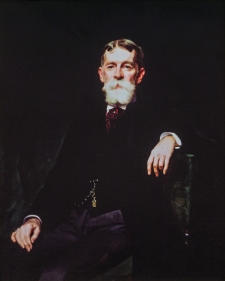 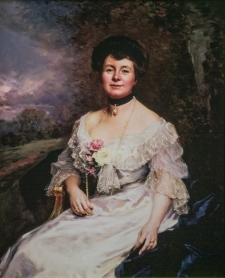 The two oil-on-canvas portraits, above, of
husband and wife Charles Phelps Taft
and Anna Sinton Taft were painted
during the last weeks of 1902 by Spanish
artist Raimundo de Madrazo Garreta.

Charles and Anna’s daughter, Anna Louise Taft, married William Semple, a UC assistant professor in Greek and head of the classics department from 1920-59. The couple worked toward the ambitious goal of creating the country’s finest classics department.

When Louise Semple died in 1961, she left funds to endow the Semple Classics Fund, which supports visiting scholars, graduate students and the John Miller Burnam Classical Library, one of the largest such libraries in the world. It also awards Semple Scholarships to outstanding UC undergraduates in classics and the Semple Traveling Scholarships for undergraduate study abroad, especially in Athens and Rome. 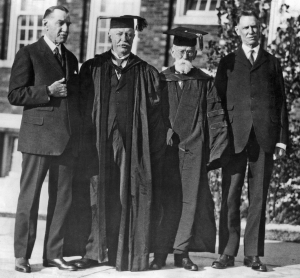 Gathered for the 1925 dedication of the Alphonso Taft Hall were his sons (from left): Henry, a prominent New York attorney; former president William Howard, chief justice of the U.S. Supreme Court; Charles Phelps, publisher of the Cincinnati Times-Star and former Ohio congressman; and Horace, founder and headmaster of a private boarding school in Connecticut. [+]

Anna Louise’s name still lives on in the community by virtue of the Anna Louise Inn and Housing for Women, located nearly across the street from the Taft Museum. In the early 1900s, parents Charles and Anna donated the property located on the corner of Third and Lytle streets, as well as funding to construct a five-story building to accommodate 120 women in single rooms.

Their concern centered on young women who came to town to work and could find no safe, affordable housing. The demand was certainly there. The day the inn opened in 1909, it was already filled to capacity.

The Taft family’s service to the university, city, state and the nation is continuous. William Howard’s son, Robert Alphonso Taft, served in the Ohio legislature for more than 10 years and in the U.S. Congress as a senator, where he was known as “Mr. Republican” from 1939 until his death in 1953.

For the Tafts, service and giving runs in the family.

-- compiled and written by Barbara Blum and Deborah Rieselman 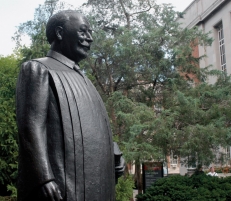 The statue of William Howard Taft in judicial robes stands outside UC's College of Law, with an inscription that notes “Chief Justice, 1921-1930.” [+] 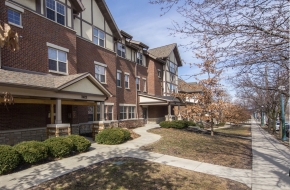 The Taft Research Center is located on Clifton Avenue across from the main campus. [+]