Is the airline you fly all it's cracked up to be? Or should they crack
down on some of their older planes?

Two University of Cincinnati researchers are proving that metal
fatigue inside planes can cause damage that's not visible to the
naked eye. The research team has developed a new test that can find even extremely tiny cracks before the damage becomes hazardous.

Peter Nagy, UC associate professor of aerospace engineering, and graduate student Zhongyu Yan can spot defects as small as half a millimeter in length in aluminum and titanium, metals commonly used for airplane fuselages and engines, by combining laser heating and ultrasonic inspection methods.

The researchers' dual approach also measures the severity of the damage. The earlier a problem is detected, the fewer equipment failures should occur. And the safer your flight should be. 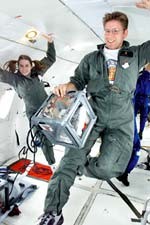 The University of Cincinnati was among 48 schools in the country that earned a spot in the two-week Reduced Gravity Student Flight Opportunities Program in Houston.

For several UC students, it was an opportunity to test their project, a control system that might be used for maneuvering "nanosatellites" in orbit.Often, equipment that works fine under normal conditions on Earth, fails in zero G. Though data analysis had not been finalized before "Horizons" deadline, early indications were positive for the UC team.

Their experiment ran smoothly, and still the test was an unforgettable experience that occurred 24,000 feet above the Gulf of Mexico. NASA's KC-135A (also known as the "Vomit Comet") plunged through a series of 32 parabolic arcs, free-falling thousands of feet, each time giving passengers 25 seconds of total weightlessness.

It pays to study

The cash has come rolling in for the University of Cincinnati College of Medicine in recent months. Three separate grants that total more than $5 million will be used to enhance medical research.

Also in December, the National Institutes of Health sent the university $1 million to fund an interdepartmental training program that exposes graduate students and postdoctoral fellows to contemporary cancer research. 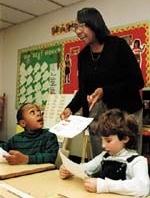 Alice Sneed acknowledges the efforts of her pupils. Photo/Lisa Ventre

Another gold star for CITE

A fifth-year paid teaching internship is one of the distinctive elements of CITE, which was in the national spotlight again in January after being showcased for university administrators at the National Conference on Teacher Quality in Washington, D.C. CITE was one of 36 outstanding programs presenting at the conference, at the invitation of U.S. Secretary of Education Richard Riley.

'Beyond ready' to teach: The Cincinnati Initiative for Teacher Education
on edutopia.org (2008)

Graves, the only architect among 11 winners, was cited for exceptional achievements in architecture, design and education. President Clinton commended him as one who "teaches us the importance of beauty, simplicity and intelligence in creating our everyday environment."

In addition to running an internationally respected architectural practice, garnering dozens of professional design awards over the years, Graves designed the UC's Engineering Research Center. He is also known for his distinctive designs of popular housewares and decorative accessories. 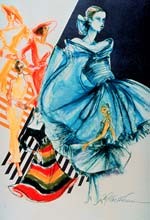 If designs intended to forecast fashion are placed in a retrospective exhibit, does that make the exhibitors fashionably late? Two UC students, an alumna and a faculty member should know, since their inclusion in the Ohio Arts Council's "Reality and Interpretation: 20th Century Clothing and Illustration."

Works showing at the Riffe Gallery in Columbus through July 9 include the following:

No matter how complex the world grows, one thing never changes: our dependence upon water. Simple, clean drinking water. We can't survive without it.

And that is what makes professor Makram Suidan's work so vital. The UC environmental engineer is using bacteria to turn the latest, high-profile threat to the nation's drinking water into simple and safe carbon dioxide and water.

In the lab, Suidan and his colleagues from the Environmental Protection Agency, which is funding the work, have successfully degraded MTBE, a suspected mutagen associated with gasoline production. Next is finding out how to translate the success in the lab, one of the few in the nation with a major MTBE focus, into usable, large-scale applications. 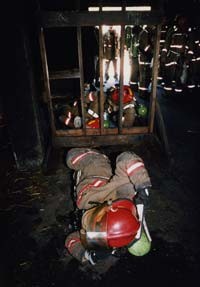 Although the best students are those with a burning desire for their studies, most don't have to stoke the flames by literally throwing themselves into the fire. But that's precisely the point of the new internship for UC's fire science technology program, the largest of the country's six university-based programs and the only one to offer both associate and baccalaureate degrees.

The College of Applied Science began the rare internship two years ago as a pilot program. This academic year, 25 students have made runs with local fire departments to realistically grasp all aspects of the profession. As program director Patrick Reynods explains, "There's a lot of tedium punctuated by a few minutes of life-and-death decision making."

"Forbes Magazine" recently highlighted what graduates of the College of Business Administration have known for years: When it comes to return on investment, UC's one-year MBA program offers students one of the best values in the nation.

"The economics of a one-year program can be compelling," wrote "Forbes." "Our survey of Cincinnati's first graduating class shows that typical graduates from 1995 repaid their cost of going to school in just 2.6 years and doubled their pre-MBA salary four years later. In contrast, the median payback period for the two-year schools we surveyed was 4.1 years."

According to the magazine's Feb. 7 edition, business schools around the country are increasingly offering the one-year MBA alternative. UC switched to the one-year program exclusively in 1995.

From earth to the moon to MOMA (the Museum of Modern Art in New York). Those are some pretty giant leaps, and some pretty giant people helped University of Cincinnati associate professor Ben Britton get there in February.

His first small step started with a desire to have people share the 30th anniversary of the moon landing in a meaningful way last July 20. The fine arts professor invented "mutual reality," a digital world in which people can assume "virtual" roles and interact over the Internet, all within the setting of the original moon landing.

The MOON Project, as he calls it, grew to incorporate documentary film footage, and the MOMA grabbed his interviews with astronauts for its film series. Britton personally unveiled the show in New York.

UC's "Human Rights Quarterly" is admittedly tiny -- less than 1,500 circulation -- compared to "The New Yorker," "Vanity Fair" and "Harper's." Nevertheless, the journal is getting big cheers this spring as one of four finalists for "best reporting" in the National Magazine Awards.

"Human Rights Quarterly" is edited by UC law professor Bert Lockwood and College of Law students; Lockwood also is director of the university's Urban Morgan Institute for Human Rights. One of the articles judges found particularly moving described how children are being trained to kill the enemy in the Liberian Civil War.

Announcement of the winner was to be May 3 in New York City.

A unique partnering of researchers from UC's College of Medicine and College of Engineering has resulted in a safer, non-invasive method for detecting the early signs of artery blockages.

By pumping fluid through transparent tubing, the researchers were able to simulate blood flow and measure ultrasonic turbulence at blockage points. 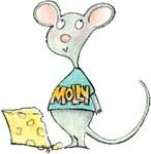 Of mice and men

In the world of genetics, it may never rise to the celebrity status of "Dolly," the cloned sheep, but scientists at the University of Cincinnati College of Medicine have successfully engineered a mouse that is genetically resistant to asthma.

UC professors Dennis McGraw and Stephen Liggett set out to alter the genetic structure of a mouse so that it would not experience the closing of the airways when introduced to asthma-causing vapors. Their success marked the first step toward a potential gene-based therapy in humans. Asthma affects an estimated 15 million people in the United States alone.

During their college days as political science majors at UC, roommates Tyrone Yates, A&S '78, and Michael Coleman, A&S '77, dreamed they would someday hold elected office. Soon after graduation, they bird-dogged their dream all the way to the White House where both served as law clerks under the Jimmy Carter administration.

Cincinnati residents are familiar with Yates as a city councilman and a past vice mayor. Coleman has taken a similar path, but 100 miles north in Columbus, Ohio, where he has served for several years as a city councilman. This year he took the reins as the city's first black mayor.

Mayor Coleman pursued his aspirations despite earlier political setbacks, first as a UC freshman when he failed to win the student body vice president post and in 1998 when he served as Democratic candidate Lee Fisher's running mate for governor. He is the first Democratic mayor in Columbus in 28 years.

Mickey Kelly of John Pater Construction works on a fifth-floor window at the former Ohio College of Applied Science. The UC-owned building at Walnut and Central Parkway is being restored. Photo/Dottie Stover