Social scientists have their microscopes focused on
an experimental initiative at the University of Cincinnati.
The effort has college administrators nationwide
jostling for a peek. 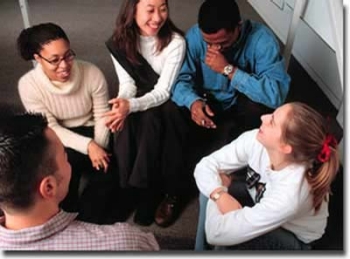 UC is knee deep in an endeavor known as "Just Community" that attempts to reform the way students, staff, faculty and administrators relate to one another. Now in its fourth year, the Just Community initiative stands in quiet defiance of the typical college environment -- a place where groups, whether divided by race, religion, college or socioeconomic background, often exist in isolation of one another.

Some refer to it as the "silo culture." Barricades of self-interest hinder a true sense of university-wide oneness and interaction. The idea of Just Community is to tear down those barriers and discover common ground -- the ideal place to build community.

A tangible example of the division that exists at UC manifests itself every day in the corridors of Tangeman University Center where young black students and young white students congregate in noticeably separate crowds. Supporters of Just Community caution, however, that the initiative goes well beyond mending race relations. Rather, its approach broadly addresses all differences.

Conceptualized by Mitchel Livingston, UC's vice president of student affairs and human resources, Just Community is designed to accomplish precisely what its name implies: To make UC, a university that supports nearly 50,000 students and employees, a more "just" place by creating an environment of equality in which all of its members share a sense of community. The crux of the movement hinges on each person's willingness to embrace the diversity around them and adhere to shared values -- a goal that is infinitely easier to state than it is to achieve.

"What does everybody have in common?" Mitchel Livingston, UC's vice president of student affairs and human resources, asks. "It's not race. It's not gender. It's not discipline. What it is is a set of ideals, values and principles. They are intangibles. They are belief systems.

"We have had some difficulty defining who we are as a university family," Livingston says, leaning forward for emphasis. "People relate to their home college, but they don't have a sense of the whole place. People don't have a passion for it. Their passion is local.
"It is terribly pretentious that you would try to change the culture of a place where it would view itself differently in a wholistic way rather than in its parts."

Though the remedy is unique, UC's problem is not. In fact, according to "Campus Life in Search of Community," written by Ernest Boyer, former president of the Carnegie Foundation for the Advancement of Teaching, the most pervasive problem college presidents identify with higher education is the absence of community. College administrators nationwide are beginning to recognize the value of Just Community.

Several universities have even invited Livingston to campus to share the concept. Last year, UC's initiative was cited as a model program for civic education by the Templeton Guide, a publication that recognizes universities that stress both character and academics.

"You go to any campus, and they will tell you the same thing," Livingston says. "'Yeah, this is a great university and a good place, but boy it is really difficult to get a sense of the whole university.' What is it? What does it believe in? What does it represent? How does it attempt to affect us uniformly across the place?"

These can be dangerous questions, Livingston says, for an institution to ask of itself. "You give people the measuring stick by which they can make constructive or destructive criticism of how you function."

Knowing this, the university did it anyway. Hundreds of administrators, staff and students have spent the last three years with an honest eye turned inward attempting to answer questions like: What do we have in common?

Lanthan Camblin, associate professor from the College of Education, served as co-chair of the Just Community Principles Committee. The charge of his committee was to conduct meaningful dialogue with the UC community and forward a consensus of values or principles Camblin acknowledges that the goals of Just Community are lofty.

"We are trying to create equality in an environment in which inequality is a basic component," he says. "You do what you can do even when you know it is not enough. You can't be deterred by what impact you are having on whom. You just can't."

The thought of achieving a Just Community is one that conjures up goose bumps for the UC professor. "I don't think we'll ever have anybody write back and say, 'The Just Community effort at UC changed my life.' But I think what we will get back is, 'I valued my experience at the University of Cincinnati because it valued me as an individual. And that is something that I've taken with me into my work and into my church and my relationships with my family.' God, that would be exciting."

Camblin said detractors of Just Community need to understand that the initiative does not promise equality of decision-making. "That is some sort of pure democracy," he shrugs. "And that is not a college environment. Just Community refers to equality of opportunity and basic rights."

"I don't think it is ever achievable. If it is, we are doing something wrong. We should be constantly re-evaluating what constitutes the value of this journey."

UC Professor Lisa Newman, co-chair of the Education/Information Committee of Just Community, thinks word is spreading that Just Community is more than simply one more initiative that UC is spending money on. "We want them to recognize that it is a philosophy," she says. "Part of Just Community is creating a feeling of pride. I can't feel a part of a community unless I can talk about it and feel that I belong to it."

Newman says Just Community is at a crucial point. "We need to take it up a notch," she says. "What has been done for the first three years is very strong, but things like this easily peter out. We want it to build. To get everybody talking about it, we need constant reminders and visibility."

To critics who think a Just Community is impossible, Mitchel Livingston, UC's vice president of student affairs and human resources, responds: "There is strength in unity. Thirty-four thousand students and 14,000 employees doing little things every day, committed to an ideal, makes it a different place."

As members of the University of Cincinnati, we aspire to:

These principles ... will become the compact between the university and all its members.