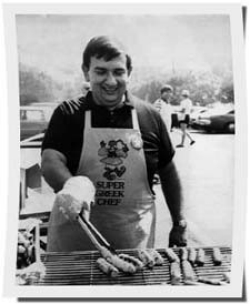 Tumbling into the water from the deck of a sailboat. Shivering through a subzero night on a straw mattress in China. Radiating calm, as an alumni tour bus hurtles down a narrow mountain road. Dining on half-burnt chicken and unfamiliar animal parts.

Christos Demakes, A&S '62, JD '65, has experienced some unusual adventures in his service to the University of Cincinnati. But he would not trade his 39 years at UC for anything. They have given him "a rich life."

Stories about Demakes' achievements -- and minor mishaps -- encircled him at a retirement celebration in his honor at the Myers Alumni Center last fall. The veteran executive director of alumni affairs even recounted some of the tales himself.

"The memorable lesson I learned from (UC president) Joe Steger was: Don't get in a boat without a life vest," Demakes said. "Even though we were going to be on the boat for a very short time, Joe insisted we wear life vests. Not far from the marina, the boat tipped over. I've never been quite so scared!"

On a trip to the Far East, as a guest of the Chinese government, Demakes surprised his fellow travellers. He was so worried about eating unfamiliar foods that he had packed several jars of peanut butter in his suitcase, according to former UC Foundation director Samuel Baker.

"We were treated to all sorts of Chinese delicacies -- thousand-year-old eggs, sea cucumber," Baker recalled. "The shocker was that Chris ate everything our hosts put in front of him, smiling all the while. While the rest of us were pushing food under our rice, Chris was devouring birds' feet, chicken beaks, fish eyes . . . . We began to call him 'the China gourmet.'"

Over the years, Demakes has been remarkably "on target" about what would benefit the Alumni Association, considering that he took the job almost by accident. He was in the right place, and he had the right skills.

"The University of Cincinnati has been my only employer; I have really never worked anywhere else," Demakes admits. As an undergraduate in political science, he asked for a summer job in the UC public relations office. That segued into an assignment with the university's development office.

Demakes wrote numerous grants and repeatedly visited Washington, D.C. seeking matching funds for new campus buildings. He worked with alumni and volunteers on both university and alumni fund-raising campaigns. He was director of development and alumni activities in the mid-1970s, when growth finally demanded the two areas be separated again.

Nancy Hamant, A&S '57, MEd '61, PhD (Ed) '67, current Alumni Association president, recalls serving with Demakes on the search committee for a new alumni director. Everyone assumed that Demakes would choose to stay with development. 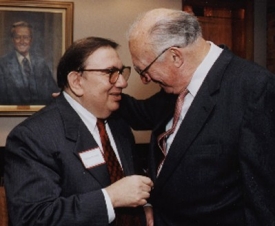 Robert Smith, right, UC College of Medicine professor emeritus, was among those who remarked on Demakes' composure while traveling. Photo/Lisa Ventre

"Three of us got to talking, wondering why we were interviewing other people when we had the best person already," Hamant recalls. "We pulled Chris off the search committee, got a resume from him, and the rest is history."

Among the improvements Demakes spearheaded are two he considers especially significant: the formation of a new membership-dues alumni association and the building of the Myers Alumni Center. With dues came more financial stability, allowing new programs like Alumni College and more visits from university leaders to alumni clubs across the country. Members also began receiving "Horizons" magazine. "It's still one of the reasons they join," Demakes insists.

The Myers Alumni Center gave the UC Alumni Association "a presence on campus," he explains. "The fact that it was built with funds contributed by alumni was the key thing. Not everyone believed we could do it."

Tributes poured in for Demakes when news of his retirement became known. David Sharp, BusAd '86, wrote: "Your enthusiasm for the university was infectious. The time and attention you gave us as students helped make us feel like an important part of the UC experience." And Michael Perry, A&S '84, told Demakes he was "one of the reasons I have never felt like 'just a number' at UC. Not when I attended school. Not after I graduated."

Though Chris is retiring, he is not planning to disappear. As a life member of the University of Cincinnati Alumni Association, he says that now when he comes to an event, he's looking forward to being "just an alum."

Even though Demakes will not be on campus in person every day, he will be there in spirit through a new legacy scholarship established in his honor by UC alumni.

The Christos P. Demakes Legacy Scholarship fund will award scholarships to entering UC freshmen who are lineal descendants (children and grandchildren) of graduates who are members of the Alumni Association.

The first group selected to receive the $2,000 awards -- presented on the basis of scholarship, demonstrated service and leadership -- enters the university in September 2000.

"We decided there was no better and fitting way to honor Chris," explains John Goering, BusAd '56, MBA '60. "We will be recognizing his years of service, his influence on alumni and parents and each year, as awards are made, a renewal of his influence and direction."

All current members of the UC Alumni Association have been sent information about how a student may apply for the scholarship, as well as procedures for contributing to the nationwide endowment campaign. Half of the $500,000 endowment goal has already been raised.