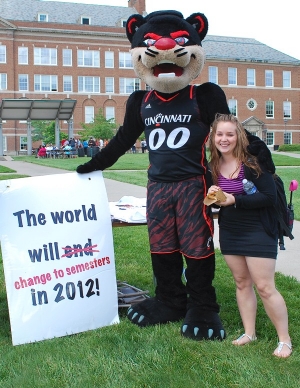 UC's students returned to campus in August 2012 to semesters instead of quarters. photo/Lisa Britton

If history is any guide, the University of Cincinnati's just-completed move to the semester calendar will stand for at least the next half century … or longer.

After all, UC was previously on semesters for just over 70 years, from the early 1890s to 1964. In the early 1960s, the move to quarters came thanks to the rising tide of baby boomers entering college years.

At that time, the quarter calendar system was viewed as a means to accommodate a greater number of students with a shorter calendar span of classes combined with an extended school day and larger class sizes. That was seen as necessary since the college-age population in the United States increased by more than 65 percent from 1960-75.

The current climate, however, has altered significantly since then. Cooperation between different segments of the higher education system in Ohio will increase during the coming years. As such, Ohio's public colleges and universities still on quarters were asked to convert to semesters by the Ohio Board of Regents.

The university began preparing for the transition back in 2008, and preparations included three major challenges.

• Curricular revisions: Every course -- about 9,000 in all -- had to be revised to cohesively fit into a semester calendar, with each course integrating with others across disciplines, majors, departments and colleges. UC added a twist by also taking this opportunity to streamline degree requirements to meet the needs of today's and tomorrow's workforce, industry and community needs.

• Student advising: Students making the transition -- including about 20,000 undergraduates in degree-granting programs -- have individual transition plans/degree audits and the offer of academic counseling to map out degree completion during and after the switch to semesters.

The goal is to keep students on track to graduate on time. Of that challenge, conversion co-chair Kristi Nelson said, "With the course revisions alone, you can liken it to putting together an incredibly complex, three-dimensional jigsaw puzzle. Each one of tens of thousands of pieces had to fit with other pieces due to the nature of prerequisites and requirements of accrediting bodies."

Semesters will provide experiential-learning benefits like those associated with co-op and study abroad since, for example, almost all study abroad options with partner institutions are based on the semester calendar. Conversion will also provide graduating students a "first-mover" advantage when entering the job market. Most large employers schedule recruitment of new hires according to the semester calendar.

Until now, UC grads entered the post graduation job market much later than regional peers because of the university's late graduation date. And employers involved in UC's cooperative education program often prefer the semester system (already in place at most other co-op schools) because it allows for a longer work cycle, enabling employers to benefit by entrusting students with projects of greater longevity and responsibility.

In addition, employers will often team co-op students from differing schools on important projects. When these students are on incompatible academic calendars, co-op students from quarter-based schools "arrive late" and "leave early" and, thus, miss out on work-based opportunities.