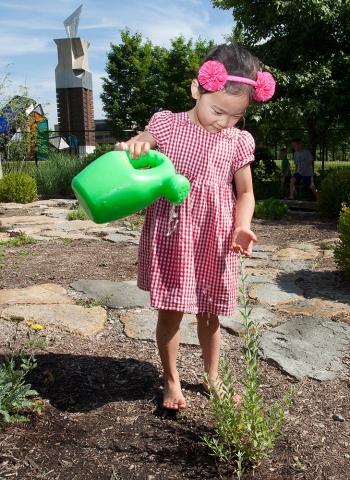 Yoo Jeong Lee waters some of the PlayScape’s plants. Beyond the gate behind her is Sigma Sigma Commons. photos/Dottie Stover [+]

Running barefoot through a wooded children’s park and wearing a red-and-white-checked dress, 5-year-old Yoo Jeong Lee smiles at a butterfly flitting by. “It looks like a monarch butterfly!” her friend Nethimi Penasivi exclaims. “In Sri Lanka, there are plenty of butterflies.”

Nearby, Abbott Hoffman-Suder and his twin sister, Lily Hope, are wading in a shallow stream, gathering rocks to build a house “for any creature ... or for any worm,” they say quite seriously. “Look, it has a worm in it already!” Abbott excitedly announces as he pulls up another rock.

This little-known nook on campus offers children 10,000 square feet of rocks, grassy mounds and trees for exploring, climbing, digging and splashing — activities increasingly foreign to youngsters today. Beckoning them to participate are a water feature resembling a small brook, a sand pit serving as a beach, a “sensory” garden, a log fort, a tunnel, plus, of course, butterflies and worms. Pint-sized guests eagerly share woodland adventures, as well as memories of their own cultures and neighborhoods.

Surprisingly, the fenced-in park, called PlayScape, is nestled in the center of UC’s urban Uptown Campus, adjacent to the north end of French Hall within feet of college students rushing to classes. For the most part, the two groups are oblivious to each other.

Birds and squirrels, however, are finding this sanctuary, giving young learners all the more reason to delight in nature and science, say educators at UC’s Arlitt Child and Family Research and Education Center, one of the oldest and most diverse preschool programs in the country and a research center within the College of Education, Criminal Justice, and Human Services. 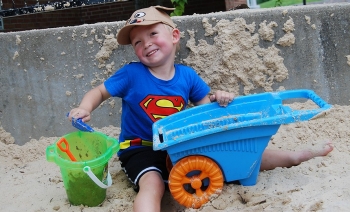 Although children think the PlayScape is fun, it isn’t all play. A UC research team is analyzing how the play area cultivates a passion for learning, a stewardship of nature and an interest in STEM areas (science, technology, engineering and math). Supported by a $330,000 grant from the National Science Foundation, the study involves Arlitt children, as well as Arlitt partner Clermont Child Focus.

Some discoveries have been surprising, says Victoria Carr, D (Ed) ’01, associate professor of education and Arlitt director. “One thing that has emerged is the children’s interest in maps. 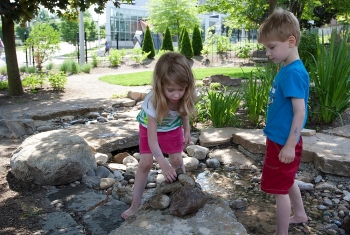 Twins Lily Hope and Abbott Hoffman-Suder build a house “for any creature” at the PlayScape. Through the trees is one of the Jefferson residence halls. [+]

“There’s a map in the center of the PlayScape. At first, children aged 3 and 4 would point at the map and ask, ‘What is this?’ By the end of their visit, they could tell us where they were in relation to the map and where features were located in the PlayScape, based on the map.

“Another discovery was around the adult perception of safety,” she continues. “There was some controversy over ‘fencing in’ nature, but we’ve found that the fencing makes our teachers and parents more comfortable in letting the children engage in free play.”

“They’re also engaging in some risk-taking as part of their exploratory behavior,” adds researcher Alan Wight, a graduate student in educational studies. “Parents are comfortable stepping back, and we get to see this risk-taking and adventure.”

In addition, creativity abounds in the nature center. Researchers Melissa Elchison, a graduate student in communication sciences and disorders, and Leslie Kochanowski, a graduate student in educational studies, say children pull pieces of the PlayScape — what the researchers call “loose parts” — into their world of imagination. “They’re playing house, and all of a sudden, a tree stump turns into a TV/nature center,” says Elchison. “They’re persistent at problem solving when they work together, instead of calling the teacher to do it for them.”

“We’re finding development in so many areas of growth,” adds Arlitt teacher Rachel Konerman, Ed ’01. “While they’re on a standard playground, they might gain some gross motor skills, but everything on the playground is level. The PlayScape has slopes and hills and rocks. So, even more than gross motor strength, we’re finding that they’re working on their coordination skills, because things are changing all the time.” 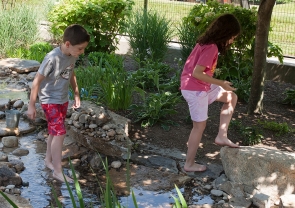 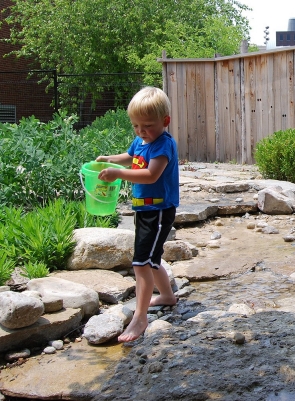 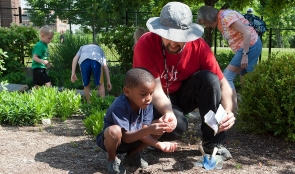 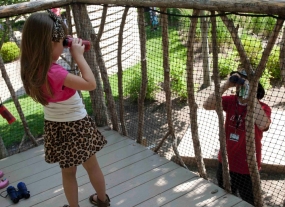 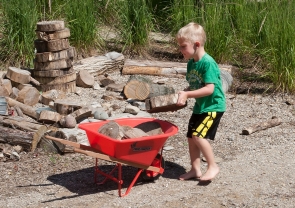 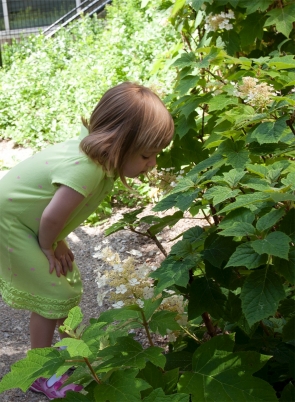 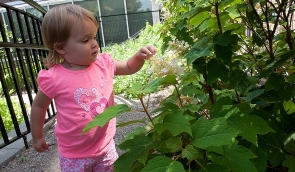 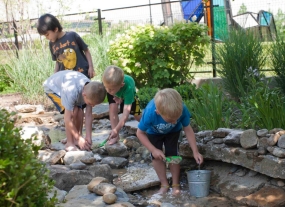 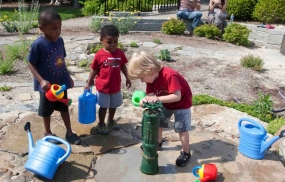 More about Arlitt's PlayScape
News release about the PlayScape