The University of Cincinnati's endowment grows with each gift and fluctuates with the markets, but the latest total is $899 million. That's down from more than $1 billion before the markets tumbled. UC's endowment is ranked 40th in the U.S., 10th among public institutions and leads all universities in Ohio in terms of endowment dollars per student. Endowments are given for specific projects and are unavailable for general day-to-day university operations.

UC earned $309 million in grants and contracts in fiscal year 2003, up $48 million over the previous year. UC ranks 46th among all U.S. colleges and universities in federal research and development expenditures and 25th among public institutions. (More specifics about research.)

The projected 2003-04 University of Cincinnati budget is $802 million. Where does all that money come from? It comes from five major sources:

UC is the largest employer in the Cincinnati region, with an economic impact of more than $3 billion. 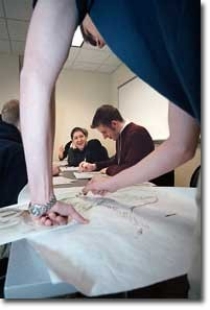 UC’s tuition is the second-most costly of state schools in Ohio, behind Miami University ($8,352). Tuition at UC has increased sharply in recent years (24 percent in two years) to make up for the decline in state support.

According to the current university budget, an estimated $48 million in scholarships and fellowships will be awarded this year.

UC’s most popular scholarship is the Cincinnatus Scholarship, which assists hundreds of students with amounts from $6,000 to $60,000 over four years. Promising prospective freshmen are invited to campus each year to illustrate leadership, academic excellence and personal growth. Up for grabs is $11 million in four-year scholarships.

At last count, UC had 13,602 people on the payroll, about half of whom are full time. The employee head count is roughly one third faculty, one third staff and one third students and interns.