James Gamble Nippert is buried beneath his memorial in Nippert Stadium’s south end.

False. It’s just a monument. And Jimmy’s not under the goal post with Jimmy Hoffa, either. Actually, the football player who died from injuries received during the 1923 Thanksgiving Day game has a nice resting place in Spring Grove Cemetery, where Sigma Alpha Epsilon fraternity has a memorial service each year, UC archivist Kevin Grace says.

Charles McMicken’s will provides for free UC tuition to all his descendants.

False. University spokesman Greg Hand says the university receives a couple of phone calls every year asking about this. Benevolent Uncle Charlie made a few provisions for relatives to schools that no longer exist, but his will never addressed the topic concerning UC.

McMicken Hall’s stone lions, Mick and Mack, roar when a virgin walks by.

Guess for yourself. UC’s longest-living urban legend, dating to before World War II, is so infamous that it is documented on the Urban Legend Reference Page of Snopes.com. We happen to share the mention with the stone lions at the universities of Missouri and Michigan, which apparently have the same predisposition.

Maybe. Although the common rumor puts the spirit in the stacks, unnamed witnesses say the ghost of a short male, around 60 years of age, in a tweed cap and jacket, roams the rare book room. Legend credits the apparition as being a former classics professor who died in the early ’60s, archivist Kevin Grace says. Because the rare book room is dark and kept at a low temperature, it does have an eerie feeling of its own. Grace admits that working in there can be “unnerving” when one is alone. “You hear many strange noises, and it definitely feels as if someone is looking over your shoulder,” he confesses.

The modern DAAP building has hallways and stairs going nowhere.

False. Peter Eisenman did design a staircase that dead-ends into a wall at the Wexner Center in Columbus, but he did not repeat the stunt in designing the Aronoff Center for Design and Art at UC. Furthermore, despite rumors that the building contains no right angles, it is replete with them. They’re just buried in the amazing assortment of oddly sloping surfaces and stair-stepped angles created by Eisenman’s use of box geometry.

Thomas Edison once read every book in the College of Applied Science library (then known as the Ohio Mechanics Institute).

Not quite. Thomas Edison did spend one year in Cincinnati as a telegraph operator and often went to the OMI library to read. But the collection’s 10,000 volumes would have required that young Tom read 27 books a day and be fluent in six different languages, archivist Kevin Grace calculates. It seems doubtful. “But he did send an autographed photo to OMI and credited the library as being important in the formation of his education,” Grace adds.

Almost. It used to. The stairs originally led to the freshman lounge on the top floor, but it was closed long ago when the area was turned into a library. Because a single entrance was needed for security, the lounge entrance was walled off, leaving stairs that stopped at a wall. Just last year, Baldwin’s renovation removed the stairs, Rick Koch, engineering facilities director, explains.

UC’s library was designed without taking into account the weight of all the books, and it’s sinking.

No way. UC architects and contractors are better than that. Nearly every university in the country shares the same rumor. UC’s started only a few years after Langsam Library opened in 1978.

Crosley Tower was poured as a single piece of concrete. As the concrete was flowing, a workman fell in, but because they couldn’t stop pouring, he is entombed there.

True (poured as a single piece of concrete) and false (no one fell in.) The similar story that workers dropped a Volkswagen into the mix while pouring is also false.

You’ve got to be kidding. The rumor’s been around since the mid ’80s, but the tower is not turning into a leaning tourist attraction.

Crosley Tower was designed without bathrooms, and facilities had to be retro-fitted into the stairwells.

False. Because the tower was poured as a single piece of concrete, stairwells were the perfect place to situate ventilation, conduits and plumbing rather than creating shafts in the concrete. Consequently, the stairwells were also designed to accommodate the bathrooms. 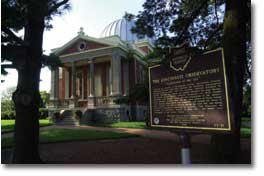 The Cincinnati Observatory Center, owned by UC, has a ghost.

You decide. Astronomer Paul Nohr says that in the ’40s an astronomer committed suicide by hanging himself from a telescope in the observatory (the country’s first professionally operated one, founded by Cincinnati College professor Ormsby McKnight Mitchel). As much as the tale sounds like an explanation for a haunting, Nohr says he has neither experienced any unexplained sightings or noises even when working late at night nor heard of such occurrences.

In looking for an eye witness, the magazine staff couldn’t get any closer than Chris Curran’s ear, but the environmental health associate professor does claim that she heard the ghost speak. When she called the observatory one July day, the voice that answered sounded like a garbled tape recording. She simply thought the telephone answering machine must have been broken, but a later call revealed the machine had been turned off. She grew curious when she realized the date coincided with the anniversary of the astronomer’s death.

A UC researcher found the minimum space needed to open a car door, and UC used the findings to squeeze as many cars as possible into campus parking facilities.

False. This rumor came from the editor’s son, Chuck Hamilton, A&S ’00, Ed ’01, who, in the honorable tradition of a serious rumor promoter, swore it was absolutely true. Sorry, Charlie. No related parking research could be found among dissertations from other universities, either.

The lining of the 1910 power plant smokestack is priceless Rookwood tile.

False. The now-toppled tower was only terra cotta and brick. Even so, before the obsolete structure was demolished to make room for the MainStreet project, the UC seals in terra cotta relief at the top were removed for use elsewhere.

The Taft family told the sculptor to enlarge the statue of William Howard Taft because the former U.S. president’s likeness was not portly enough.

Nah. Although the 27th president was indeed the country’s heaviest, no records show the alumnus’ family was consulted when making the statue, which is located between the College of Law and Blegen Library.

A UC alumnus piloted the Enola Gay aircraft in 1945, dropping the first atomic bomb on Hiroshima.

True. Before the war, Paul Tibbets attended UC intending to study medicine, but enlisted as a cadet in the Army Air Corps in Fort Thomas, Ky. The pilot and commander of the 509th Group retired as a brigadier general, was inducted into the National Aviation Hall of Fame and received the Distinguished Service Cross, the Distinguished Flying Cross, the Air Medal, the Purple Heart, the Legion of Merit, the European Campaign Medal, the Joint Staff Commendation Medal, the American Defense Service Medal, the WWII Victory Medal, the Air Force Outstanding Unit Award and the American Campaign Medal. Tibbets died in 2007 at the age of 92.

Diver saved by a shadow

In training for the 1968 summer Olympics, UC high diver Charles Murray was saved from jumping into Laurence Hall’s drained pool during a late-night practice when his body cast a cross-like shadow on the wall.

False. This rumor also has given UC star status on Urban Legend Reference Page of Snopes.com. But there was no Charles Murray here in 1967, and no Charles Murray was ever a UC diver, UC spokesman Greg Hand states. Furthermore, the story has been reported as long ago as the 1950s, as far away as England and through endless e-mail chain letters