When it comes to name dropping, no one could do it better than Theodore "Ted" McCarty, Eng '33. Chuck Berry, George Harrison and Jimi Hendrix are just a few. All three were musicians indebted to McCarty’s instrumental genius.

While other engineering grads were solving logistical challenges of American industry, building breathtaking bridges or erecting innovative buildings, McCarty was helping to mold the sounds of rock 'n' roll. His talent begat musical styles that have both inspired and incited generations of young people.

As president of the Gibson Guitar Co. during its golden period, he collaborated with renowned guitarist Les Paul in the early '50s to develop the solid-body guitar into the Les Paul model, arguably the most famous electric guitar in history. Though Ted never played it, his fingerprints are all over the instrument that transformed rock 'n' roll as well as country-Western music. McCarty died in April at the age of 91.

"He was an engineer and an accountant, and he turned Gibson around," acclaimed guitar designer Paul Reed Smith told a reporter from McCarty's hometown paper in Twin Falls, Idaho. "It's fair to say that without him, our industry and the music would be different."

The solid-body guitar, once a gimmick instrument, became a signature sound after McCarty, with Les Paul's endorsement and design assistance, crafted a beautiful mahogany and maple guitar capable of high amplification and noise-free operation. Later versions of the Gibson Les Paul powered the blues-rock sound of the late '60s and the Southern rock of the late '70s. Today, the Les Paul provides distinctive sounds for every genre of rock, from alternative to metal. 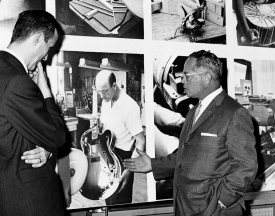 Over the years, Gibson's Ted McCarty-era guitars have found their way into the capable hands of icons like BB King, Carl Perkins, Chuck Berry, Jimmy Page, Keith Richards and Eric Clapton. One can barely turn on the radio without hearing further evidence of the guitar designer's influence: George Harrison (The Beatles), Pete Townshend (The Who), Ace Frehley (Kiss) and Joe Perry (Aerosmith).

The talented inventor's wildest and most recognized guitar designs emerged as a retort to jibes by rival Leo Fender that Gibson "hadn't invented a new thing in years." McCarty, a commercial engineer by training, responded by scrapping the traditional rounded guitar shape and drew up three new models with angular body shapes.

The Flying V, Explorer and Moderne models shocked the industry when unveiled during a 1958 trade show. The jagged designs, though too futuristic even for guitar slingers in '58, eventually took hold of the revolutionary spirit of artists like Jimi Hendrix. The Flying V adorns Planet Hollywood restaurants around the globe.

McCarty's practical contributions to the industry are far less flashy. He invented a scratch plate that converts an acoustic guitar to an electric guitar. He also fashioned the one-piece bridge/tailpiece as well as the Tun-o-Matic bridge.

Gibson's champion left the company in 1966 to purchase Bigsby, an accessory company specializing in guitar vibrato systems, which he ran for another 20 years. He later worked as a consultant to the Paul Reed Smith guitar company in the 1990s, which acknowledged his contributions to the industry by naming a guitar after him, an honor usually reserved for high-profile musicians.

Though the music world will miss him, one thing is certain: Ted McCarty's legacy, the Les Paul guitar, is in good hands.