Broken Heart: Can you really suffer from one?

Condition may be as real as it feels 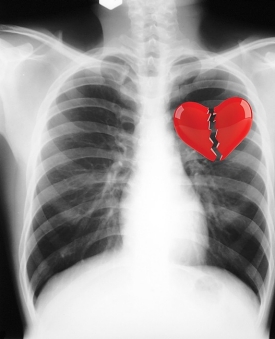 The phrase sounds so tragic, yet so tender: "She's suffering from a broken heart." Are the words just an excuse for sympathy? Or can one really suffer physically from a romantic breakup?

UC Health cardiologist Imran Arif says a broken heart is a real condition. And it's more serious than a few melancholy months of mourning a lost love.

"Stress-induced cardiomyopathy, or broken-heart syndrome, is a known temporary heart condition that causes sudden chest pain and feels like a heart attack," he says, adding that stress and depression have been linked to heart disease and that sudden emotional stress or bad news has been linked to sudden cardiac death as well.

Arif says the symptoms of broken-heart syndrome may be brought on by the heart's reaction to a surge of stress hormones, and as a result, part of the heart temporarily enlarges.

First described medically in 1991 by Japanese doctors, the condition was originally called takotsubo cardiomyopathy, he explains. Takotsubo is a type of pot used by Japanese fishermen to capture octopuses. When doctors take X-ray images of a person who experiences broken heart syndrome, part of his or her heart resembles such a pot.

"In a conventional heart attack, an obstructed artery prevents oxygenated blood from reaching the heart muscle, resulting in the rapid death of tissue and potentially permanently damaging cardiac function," he says. "However, the heart muscle in broken-heart syndrome is simply stunned in the adrenaline surge. Little tissue is lost."

But he warns that "temporary" does not mean that there is no need to seek treatment quickly.

"If you feel like you are having a heart attack, regardless of the cause, call 911 immediately," he says. "There are a small number of cases of broken-heart syndrome, but it's really important to learn how to recognize them and receive appropriate treatment as soon as possible."

Doctors do not yet understand the mechanism that causes broken-heart syndrome. Furthermore, there are neither any recognized ways to identify people who might be susceptible to the condition nor strategies that patients might adopt to reduce their risk.

In the meantime, hold on tight to Mr. Right, and if he's Mr. Wrong, get rid of him early. Your heart will thank you for it.