Science and history weigh in on Mayan ‘prediction' 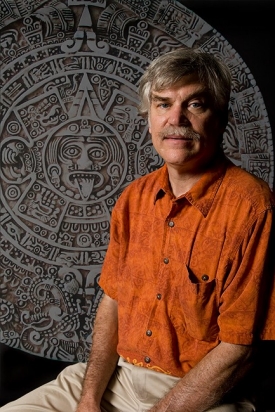 Vern Scarborough, UC anthropology professor, says the Mayans were considered the most literate of all New World Native Americans during the post-classic period (c. 900 - 1520), based upon the way the Spanish chronicled the Mayans' extensive writing and calendar systems. photo/Ashley Kempher

Hollywood movies about apocalyptic events and news stories about radical groups building bunkers in the desert have become common fodder as Dec. 21, 2012, draws near. That's the date the ancient Mayans presumably predicted as the end of the world or, at least, a transformative catastrophe of ominous proportions. Does that mean you should start hoarding supplies for survival, too?

The catalyst for the 2012 fears, he says, is the calendar of the pre-Columbian Mayan civilization. In the Mesoamerican Long Count calendar, Dec. 21, 2012, completes a "great cycle" of 13 baktuns (periods of 144,000 days each) since the mythical creation date of the calendar's current era.

Scarborough says the Mayan calendar, like their art, architecture, writing and astronomical systems, was sophisticated and attached to their beliefs. As a result, scribes, interpreters and kings often used it to "predict" periods of calamity, eclipses and other seemingly unforeseeable events, which gave them political cache and power over a society that thrived on mysticism to deal with the unknown.

"They had a very eloquent calendrical system geared toward numeration," he says. "And numbers can allow you to create almost magical properties by manipulating integers in various ways."

From these manipulations, "dire periods" could be built into the calendar, periodic cycles when Mayans felt the world was jeopardized because these mathematical relationships aligned in a disconcerting way, Scarborough says. "The 2012 business is part of that. These numbers align in a linear manner, and we are supposed to have this catastrophic moment."

Some experts, however, believe that during these predicted periods, the Maya may have actually induced some kind of collapse because they anticipated the worst, wishing themselves into calamity. Though the evidence for such occurrences is unclear, the possibility rings familiar in the current 2012 panic.

"What is happening now in our world is that you have a lot of people who are disenfranchised and looking for answers," Scarborough says. "Being human, there is so much that's uncertain. We have a hard time predicting from year to year.

"To think that these calendars or anything else would intercede from some mystical source outside our universe and affect our wherewithal ... there's no evidence. And as a scientist, it's kind of ridiculous."

Of course, while there is nothing to suggest anything will occur in 2012 versus 2022 or any other year, Scarborough says, "Coincidences do occur."

Link:
Read about Vern Scarborough's research into sustainable water use