Publications: What's the future of print?

New display technology to dictate how we read 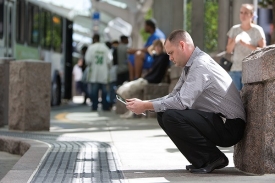 Imagine a mobile device that looks and feels like paper yet delivers books, your morning news and even high-resolution color video. Now picture yourself rolling it up and stuffing it into your pocket.

UC experts say that is an accurate description of where publishing is headed over the next decade. Furthermore, research in UC electrical engineering labs is helping to get it there.

Using a technique called electrowetting, UC's Andrew Steckl is sleuthing a way to print complex circuitry on bendable paper stock or e-paper. Unlike competing devices, Steckl's rollable display — which stacks pixels as opposed to arranging them side-by-side — will show more than washed-out grays and deliver full-color multimedia, while being easy on the eyes, even in bright-light conditions.

"Nothing looks better than paper for reading," says Steckl, an Ohio Eminent Scholar. "Paper has a very high white brightness and high contrast. We are used to the look and feel of it. We hope to have something that would actually look like paper but behave like a computer monitor in terms of its ability to store information so we could retrieve it."

On the power-consumption side of things, electrical engineering researcher Jason Heikenfeld is addressing the problem with battery-hungry devices. His low-power electrofluidic display only consumes power when pixels are activated and not when pixels are stationary, a technology he's now commercializing.

Steckl says the growth of e-readers and iPad-like devices are already transforming the way we consume and share information. But, he says, it is still only a portion of the public that has made the digital leap.

"My hope is to make e-paper a universal tool," Steckl says. "The growth in e-readers has been fantastic, but it is still a small segment of the population when compared to the number of people who touch a newspaper. The idea is that eventually this type of device would be cheap enough that you could have several in the house."

Still, he says, it will be some time before e-paper and electronic readers fully replace printed media. "I've just started to use my iPad to read books," he says.

"It is kind of fun. But I do still like to have an actual book in my hands. I'm attached to both.

"The next generation or the one after that may not have the same attachment. We'll see."