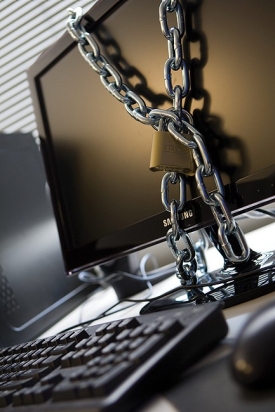 Imagine you are 14 years old and alone, clutching a credit card in Times Square at midnight.

Users are just as vulnerable every time they surf the Internet, says Richard Harknett, UC associate professor of political science. Harknett is a former Fulbright winner who has worked with the Clinton and Obama administrations on enhancing cybersecurity. The danger of unsafe computing goes beyond the individual, he warns, making every click an issue of national security.

"It's not just about identity theft or protecting yourself from bad things that can happen online," Harknett says. "Individual Americans are also contributing to the vulnerability of the overall national cyberspace infrastructure."

The Internet was built for commercialization and sharing research, both dependent on ease of access, "the opposite of security," he notes. "Now, we have to build security back into the system."

The inherent vulnerability of the Web leaves holes through which cyber criminals attack large systems using methods such as "botnets," armies of compromised individual computers. In other words, leaving your PC vulnerable opens it up as a potential weapon for those who might attack such things as the nation's electric grid or financial transaction records.

Although researchers predicted some such threats more than 10 years ago, one area was largely overlooked — the explosion of online banking and financial services. Instead of working with the government to create the most secure online systems, Harknett says, banks simply built losses from online fraud into their business models.

"It becomes a national security issue if, due to these weaknesses, a major breakdown occurs in the financial system. In a major city, for example, what if customers of a certain bank suddenly don't have access through their ATMs, their balances go to zero, and they have a complete loss of confidence in the banking system?" he asks.

"People are still not taking this seriously enough. We don't want a cyber Pearl Harbor —the incident that all of a sudden moves folks to change. How do you not scare people into putting money under their mattresses, but get them to pay attention enough to engage in better practices?"

The long-term solution, Harknett insists, is education and awareness of safe computing, beginning in elementary school. "It's an establishment of norms: How do you live in the digital world?"

Link:
More about cyber security from Harknett at Science Daily