Mars: Will we ever live on the red planet? 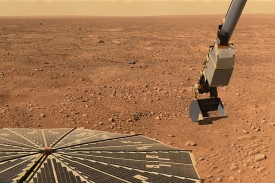 NASA's Phoenix Mars Lander transmitted this photo of the red planet in 2008 while collecting and processing soil samples. Phoenix is one of many robots to explore Mars since 1976 when the Viking 1 Lander first touched down. photo/courtesy of NASA

UFO sightings, alien abductions and little green men seem to occupy a place of science fiction lore in our collective conscience. But living on Mars? UC geologist Warren Huff, A&S '63, says making the red planet home may be closer to reality than once thought.

Why turn to a geologist, particularly a world expert on clays of the Earth, for clues about Mars? The clay minerals there, it seems, hold trace amounts of water. And the theory goes, where there's water, there's the possibility of life. That explains why NASA has been known to call upon Huff when they get to poking around for life on our celestial next-door neighbor.

According to Huff, the remote control rovers that are scratching and sniffing the Martian surface, in addition to the satellites orbiting and photographing every square inch of the place, are revealing exciting new things every day.

Huff says scientists hope to answer many questions in 2012 when NASA deposits the Mars Science Laboratory, an SUV-sized six-wheeler nicknamed Curiosity, onto the Martian surface. The trip there alone will take several months." 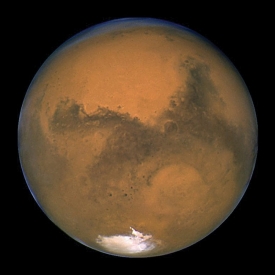 Curiosity is going to be able to really look at the soils very carefully for microbial activity," he says. "And one of the questions they are going to raise is if it is habitable."My feeling is that there is water bound up in the soil. Life probably did, and may still, exist there. Now, whether it would be of interest or even desirable to live there, it's hard to say."

In geological terms, the professor says Mars could actually be considered more stable than Earth. "It doesn't look like there is a lot of volcanism," Huff says. "And there doesn't seem to be a lot of earthquake activity. So Mars is really a very quiet planet.

"It is a lot quieter than the Earth. The Earth is always rumbling and mumbling about something."

As far as the likelihood that we'll be taking up residence many millions of miles away, he says not to pack your bags just yet.

"It won't be anytime in the foreseeable future because the technology involved to develop habitation there (without oxygen) is going to be pretty challenging. But conceptually, I could see that it might be a possibility."

In the meantime, he and his colleagues will continue to gaze skyward, partly because he sees similarities between Mars and the Earth of long ago.

"If Mars is an early Earth, what could we learn about it that we could then use to understand more about Earth? It is our best analogue in the solar system at the moment."