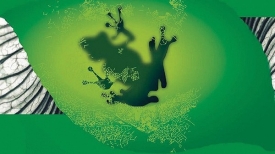 Firefighters are exposed to dangerous levels of ultra-fine particulates at a time they are least likely to wear protective breathing equipment &mdash; when decreased smoke has caused them to remove protective facemasks while trying to keep debris from re-igniting, UC environmental-health researchers say. Firefighters may be facing an increased risk for heart disease because of exposure to particles invisible to the naked eye but inhaled into the deepest pockets of the lungs. Researchers also note that much of this exposure could be avoided through equipment improvements and protocols such as rotating firefighters more frequently.

To study environmental links to asthma, which affects up to 24 percent of Cincinnati's school children, UC environmental-health researchers are partnering with Cincinnati Public Schools and the Cincinnati Health Department to examine how idling buses and traffic near schools impact children's health. After comparing indoor and outdoor air samples from both schools and adjacent communities, researchers expect to develop an anti-idling campaign to reduce diesel exhaust from buses, then measure the impact afterward.

Girls now experience the onset of puberty at younger ages, according to UC College of Medicine and Cincinnati Children's Hospital Medical Center researchers. Their study showed that breast development occurred in more 7- and 8-year-old girls, especially white girls, than indicated in studies conducted 10 to 30 years earlier. Previous studies also linked an increased risk of breast cancer to an earlier age of the first menstrual period.

UC researchers earned the 2010 Earth Award for an artificial photosynthetic foam that converts solar energy to sugars, which then can be converted to biofuels like ethanol. Inspired by foam nests that certain semi-tropical frogs make, the artificial foam removes carbon dioxide from the air. If used in carbon-dioxide-rich environments, like coal-burning power plants, the foam could capture carbon dioxide from the exhaust before it was released to the atmosphere. The Earth Awards, a global innovation contest, links viable green ideas to investors.

UC Neuroscience Institute researchers are in the final step of testing a new drug-delivery model for Parkinson's disease &mdash; a degenerative neurological disorder that causes certain dopamine-producing brain cells to die. In these clinical trials, a physician inserts a small tube into the body to feed levodopa (the precursor of dopamine) into the upper intestine. The medication is supplied in a gel form from a cassette worn outside the body with a programmable pump allowing the patient or physician to adjust the medication.

Researchers say this continually "bathes" the patient in dopamine. In general practice, oral medication is taken at certain times of the day, stimulating the brain at artificial intervals. Abbott's levodopa-carbidopa intestinal-gel treatment is currently being tested for safety and effectiveness in Phase III clinical trials, the final step before study results are submitted to the Food and Drug Administration to obtain a New Drug Application. 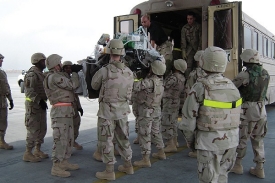 The U.S. Air Force has pledged up to $24 million for trauma and critical-care research through UC's Institute of Military Medicine. The agreement is set to fund various re–search, including how the unique environment of aeromedical evacuation affects the body and possible treatments to offset those effects, plus clinical studies on the amount of oxygen required for using an oxygen-concentrator device at different altitudes.

UC and its affiliates exceeded $443 million in research funding for fiscal year 2010, an increase of more than $65 million over '09.

Vice president for research Sandra Degen credits much of the increase to stimulus funds awarded from the American Recovery and Reinvestment Act (ARRA), but said the university saw a slight increase without those dollars. UC received $284 million, including more than $44 million from ARRA, totaling a 19 percent increase for '10. 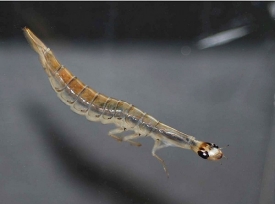 Researchers at UC caught the attention of biologists worldwide this year when they turned up evidence of a bug that hunts with natural bifocal lenses — an optical phenomenon unlike any other in the animal kingdom. The discovery, scientists hope, could also have implications for improving human vision.

Biologist Elke Buschbeck and doctoral student Annette Stowasser discovered that the shrimp-like larvae of the sunburst diving beetle &mdash; commonly referred to as a water tiger — has two retinas in each of its front eyes allowing it to toggle between up-close and distance vision and to bring both perspectives into focus at once.

The water tiger's keen eyesight may be part of what makes it such an adept and bloodthirsty predator even in murky streams, as it is known to kill mosquito larvae and tadpoles by the dozens.

A pair of College-Conservatory of Music alums strolled the red carpet earlier this year when they took home their field's top awards.

Tom Viola, CCM '76, won a 2010 Tony Award for Excellence in the Theatre for his work as executive director of Broadway Cares/Equity Fights AIDS. One of the foremost charities on Broadway, BC/EFA raises tens of millions of dollars each year for AIDS-related work.

Later in the year, 2003 graduate Travis Hagenbuch snared an Emmy Award for his work helping to light the Winter Olympics' opening ceremony, a television event seen by 3 billion people. 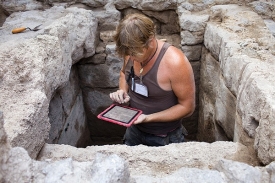 It turns out there truly may be an app for just about anything &mdash; including some slick ways to record the findings at an archaeological dig in ancient Pompeii, Italy.

UC classics assistant professor Steven Ellis and a group of researchers got Apple's attention this year when the company learned that UC's excavation team had dumped their old way of entering notes and sketches on paper in favor of using a half-dozen iPads to digitize their findings from the trenches. Apple liked the usage so much, the company ran a thousand-word feature article about the application on its website. Ellis credits UC colleague John Wallrodt, who turned to the tablet device for its portability, multi-touch screen and long battery life.

By digging up an entire neighborhood in the working-class district of Pompeii, the UC team is piecing together the roles that non-elites played in the shaping of the ancient city, buried by the volcanic eruption of Mount Vesuvius in A.D. 79.Field researcher Kevin Dicus uses an iPad to record observations of well construction as part of a University of Cincinnati dig at Pompeii. 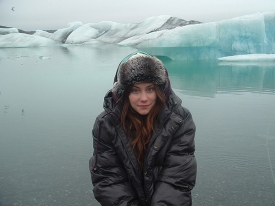 Kurt Olausen, director of UC's international programs, says UC's success rate in the program is generally high, and five out of 14 applicants received awards in 2010-11. The Fulbright Program is the flagship international educational exchange program sponsored by the U.S. government and operates in 155 countries. The program awards scholarships to approximately 1,500 student applicants per year, and alumni have achieved distinction in government, science, the arts, business, philanthropy, education and athletics.

Faculty and 11 students from the School of Planning in the College of Design, Architecture, Art, and Planning are working with the city of Recife, Brazil, which is exploring investment in a redevelopment plan created by UC's team to help the metropolis prepare for the 2014 soccer World Cup. The plan, created in 2009, calls for a tourist-friendly corridor, along with major changes to enhance retail activities, improve traffic flow and highlight the city's rich cultural heritage. To achieve these goals, UC's team recommended burying utilities, creating galleries for local artists, community policing strategies complimented by two police stations, pedestrian cultural tours, streetscape improvements, recycling programs and entrepreneurship training.

U.S. News & World Report has ranked the University of Cincinnati among America's Best National Universities, placing it 156th in the top tier with national institutions. The publication also ranked UC 11th as an "up and comer," tied with SUNY-Binghamton, Denver and the University of Southern California.

The Princeton Review listed UC among the nation's best institutions for an undergraduate education for the fourth year in a row, putting the university in elite company — only 15 percent of four-year colleges in the U.S. are featured in the flagship college guide, dubbed "The Best 373 Colleges."

Times Higher Education magazine, based in London, ranked UC for the first time among the top 200 universities in the world for 2010-11. The influential magazine's global university rankings are recognized as the most authoritative source of broad comparative performance information on institutions around the world.

UC faculty are crossing oceans — and cultures — through a new three-year partnership with five Iraqi institutions. The university is one of five U.S. institutions selected for the U.S. State Department program to provide technical and educational support for college programs serving undergraduate students in Iraq.

Representatives from the College of Business and the College of Education, Criminal Justice, and Human Services traveled to Baghdad during the summer to examine courses in English as a second language and education studies.

They also plan to help the Iraqis improve curriculums in finance, business and economics. UC hosted a delegation from Iraq in November. 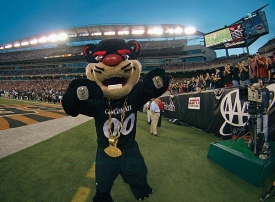 Bearcat fans were cheering on the home team last year while decked out in record amounts of UC apparel. The sale of UC-branded clothing brought in nearly $782,000 in royalties in 2009-10, a record-breaking year that included the football team's trip to the Sugar Bowl. The total was a 52 percent increase over the previous year.

In terms of earned licensing income, UC stands in 44th place nationally, ahead of the University of Pittsburgh (45), Stanford (48) and Georgetown (63).

Rising enrollment played a role in the increase, as did strategic planning with key licensees, says Marty Ludwig, director of UC Trademarks and Licensing. Ludwig's playbook included these moves:

When fall quarter started, UC had a new record enrollment of 41,357 students, up by more than 4 percent from last autumn. The freshman class, with 5,969 incoming students, represents 39 states and 44 countries. To accommodate the numbers, additional morning and evening classes were scheduled to make better use of existing facilities.

Among UC's 13 colleges, the College of Nursing experienced the largest jump in enrollment with an astounding 29 percent more students enrolling than last year. The next biggest increase was the McMicken College of Arts and Sciences with a 11.4 percent leap.

Furthermore, the Uptown Campus freshmen were the best prepared incoming class ever with an average ACT of 25 and high school GPA of 3.44. That included a record 45 freshman National Merit Scholars and 21.5 percent of the students who had been among the top 10 percent of their high school classes.

Textbook rentals were offered for the first time — for potential student savings of 50 percent or more.

UC Clermont College had to install a new access road to accommodate its record enrollment of 3,990.

After UC administered the national
Student Satisfaction Inventory survey for the
fourth time last spring, results indicated that
student satisfaction had risen in more than
50 percent of the categories. In comparing
results with national data, UC’s Uptown
Campus students were more satisfied than
students at other four-year public institutions
in the following areas: