Terrorism: How do we combat it today?

Why the face of terrorism has changed, and what to do about it 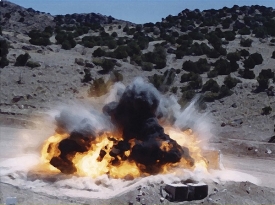 Nearly a decade after 9/11, the threat of terrorism remains a fact of life for Americans and for citizens throughout the world. But just what does the risk look like now? And are we any safer today?

"Unfortunately, as a society and as a culture, we have gotten complacent," says Ed Bridgeman, Ed '76, MA(A&S) '83, UC Clermont professor and terrorism expert who works with the United States Department of Homeland Security on incident response and training for public-safety officials. "Because we haven't had any more big attacks, the feeling is that we don't have to worry anymore."

But recent incidents, including the attempt last year by a Nigerian man to detonate a bomb on a plane en route to Detroit and the foiled Times Square car bomb earlier this year, indicate to Bridgeman that "although we have gotten better, we still have quite a way to go before we can start feeling safe."

One of the ways to improve safety is to recognize that the faces behind terrorism have changed. While both the above incidents were linked to al-Qaida, they represent a growing trend of independent terrorist cells and individuals acting on their own, backed by the philosophy of al-Qaida. In many cases, the principles and technical details — how to make a bomb, for instance — are gleaned from the Internet.  "

They are not directed from some cave or village headquarters in Afghanistan, the way the 9/11 attack was," Bridgeman says. "And that kind of thing is really troubling for intelligence and operational people because you never know when there are a bunch of guys in a basement plotting something until it's almost too late." 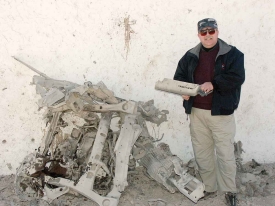 Ed Bridgemean at a 1/10-scale replication of the Oklahoma Bombing, which killed 168 people. The 2008 event took place in Socorro, N.M., where he teaches a cource on response to terrorist bombings at the University of New Mexico.

In addition, such small-scale, amateurish attacks could indicate larger threats on the horizon. "We're not seeing the steely-eyed, first-line terrorists carrying out these operations. These guys are almost like throw-aways, willing volunteers. These are just probing attacks. Someone somewhere is just trying to see where the holes are in our systems."

Bombs are the most likely source of terrorist attacks for the near future, Bridgeman says, due to the widespread availability of the formulas and materials needed to make them. Chemical and biological attacks are more difficult to devise because of the relative expense and danger of resources, as well as the advanced education needed to carry them out.

Regardless of the attack method, the ultimate answer to terrorism lies in "fighting ideas with ideas," Bridgeman says. He points out that classism and poverty draw far more Muslims into terror cells in European countries than in the United States, for instance.

"That's why we find a lot less successful terrorism recruiting going on in the U.S. Muslim population. The numbers here are tiny compared to other parts of the world where individuals see martyrdom as the way out and the path to paradise. "

Here, they have a lot more to lose. Some are entrepreneurial, and they see a track to upward mobility. We're doing a much better job than Europe of integrating Muslim immigrants into our culture and society."

Still, Bridgeman notes, awareness and recognition of actions that could signal an attack — both by officials and the public at large — are the practical elements to fighting terrorism. Bystanders who reported a suspicious SUV in Times Square ultimately helped to thwart that attack and potentially saved lives.

"Counter-terrorism is neighborhood watch writ large. If you see someone back a truck up to your neighbor's house and carry out a flat-screen TV, we call that a clue. So if you see someone taking pictures of power plants or bridges, those are clues.

"The purpose of anti-terrorism education is not to turn people into experts," he says. "But you want to make people better consumers of the news that's going on around them and better observers of their environment."

Plus, he adds, "It's better than duct-taping your windows."

Link:
More about preparedness from Bridgeman