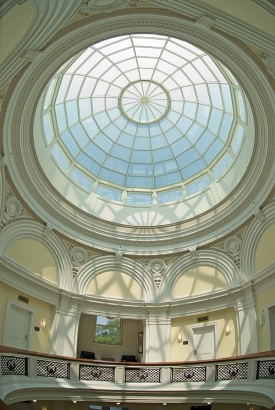 While the last two decades have seen more new construction at UC than perhaps any other college campus in the country, the university also has taken steps to renovate and restore some of its more historic, as well as practical, spaces.

Step into Van Wormer Hall and the dramatic transformation of the oldest building on campus is immediately apparent. UC's only remaining 19th century building was topped with a gleaming glass dome (at right) in 2006. Van Wormer's original dome was taken down during a previous restoration in 1930.

Now used for administrative offices, the university's first library building saw a $10.7 million restoration that involved adding a fourth floor and cutting a large circular hole in the first floor to allow views of the skylight from the lower level. Craftsmen, led by Beyer Blinder Belle Architects, carefully preserved original marble stairwells, restored elaborate wall and ceiling ornamentation and added both an elevator and new stairwell. The entire exterior of the sandstone structure also was restored, including new granite steps leading to the main entrance. 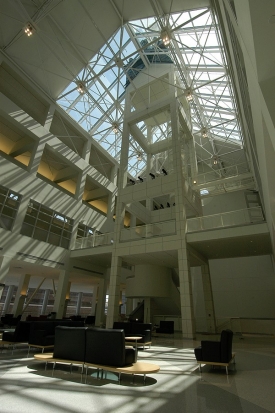 If you like change, you'll fall in love with TUC. Nowhere on campus is UC's architectural renaissance more obvious. For decades, the student union has been the place on campus for friends to hang out. And while that hasn't changed, the building's environment is vastly different due to Tangeman's $50 million rebirth in 2004. From the outside, only part of TUC's old shell remains, mainly the building's two iconic elements, the clock tower — though now surrounded by a glass roof — and the four-column facade that faces McMicken Hall. The rest of the building's exterior walls are clad in zinc to match UC's new MainStreet. Inside TUC, a building that was once dark and confined is filled with light and far more spacious, particularly the nine-story atrium that reaches from the lower-level food court clear to the skylight. 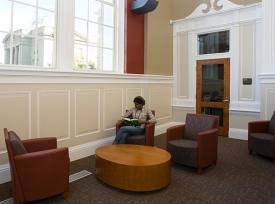 UC's Teachers College/Dyer Hall renovation project was a welcome change for faculty and students from the College of Education, Criminal Justice and Human Services, who returned to the 1930s-era building in September 2008. The west wing of the facility underwent an $18.5 million facelift. Refinished walls, new windows and a flood of natural light have created a bright and inviting interior decked out with stained pillars and dark wood trim. The project included renovations to dozens of offices, four new learning rooms, a videoconferencing room and a new CECH Library that spans both the third and fourth floors. In renovating the library, workers tore out a dropped ceiling that, until now, obscured the space's original art deco ceiling and Juliette balcony.

UC also unveiled a $3.3 million renovation of Zimmer Hall in 2008. Much of the work focused on Zimmer Auditorium, the building's once-drab, 800-seat lecture hall. Grads over the last several decades may not recognize the enormous classroom (now reduced to 534 seats) as it boasts modern lighting, ergonomic furniture and updated audio/visual equipment. 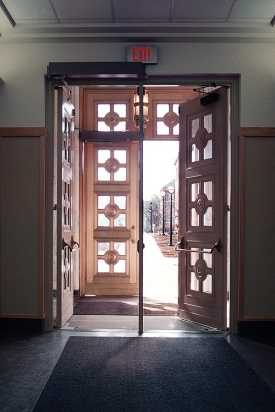