Popular professors of today and favorite faculty from yesterday.

Roger Daniels' graduate students couldn't possibly forget him. For one, though he retired in 2002 and now lives near Seattle, the 79-year-old emeritus professor of history keeps in touch with many of them.

When time allows that is. Daniels, author of several books on immigration history, continues to write, edit, lecture and consult in retirement. 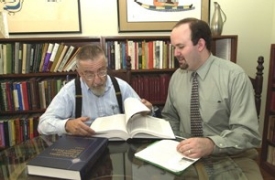 Daniels started at UC, following stints at a few other universities, as head of the history department in 1976, a position he held for five years. He was named the Charles Phelps Taft Professor of History in '94.

"I have always tried to convince my students, at whatever level, that history is not just about great dead white men, but that, properly considered, it is about the changing hopes and aspirations, successes and failures, of the human race," Daniels says.

Nominated by his students, he won an award of excellence from UC for the effort he put toward mentoring his PhD candidates. "It seems to me that mentoring is simply a long-range form of teaching," Daniels says. "They came to know that I cared about what they were doing. I taught at a number of places, and I still get mail from students I had 20, 30, 40 years ago."

Daniels, a national expert on immigration, still hears from former students when they see his name in a newspaper article or his face in a television documentary. And when he comes across things that he knows will appeal to those who are now teaching all across the country, he drops them a letter or an e-mail.

The emeritus professor calls his friendship with his former students "the most rewarding kind of professional relationship." And that feeling is certainly echoed by Robert Miller, A&S '81, MA (A&S) '86, PhD (A&S) '91, who was captivated by Daniels' classroom wit and insight as an undergrad.

"He would sometimes read a quote from a notecard, then pause very dramatically and look up at the ceiling for what seemed an eternity, and then he would continue with some new thought," he recalls. "I was hooked. I wanted whatever he was drinking.

"Roger ended up serving as my master's thesis adviser," says Miller, who has been teaching history at UC since 1990. "He has had a profound influence on me in the way that I think about the past, my writing style and how I conduct myself in the classroom. He has been my constant sounding board on decisions about work, writing and life in general.

"I consider him a very dear friend."

Roger Daniels' bio on the Organization of American Historians site