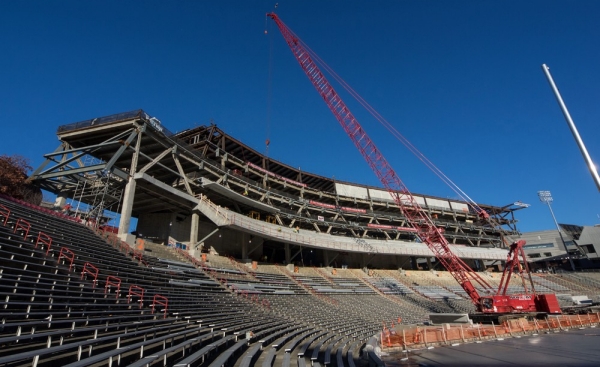 UC to open 2015 football season by unveiling expansion and upgrade of Nippert Stadium, one of the gems of college football 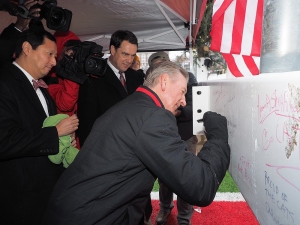 Head Coach Tommy Tuberville, Athletic Director Mike Bohn and UC President Santa Ono signed the structure’s final beam before it was ceremoniously raised in December 2014 and welded in place. Tuberville joked: “I’ve signed a lot of things in my life, but I’ve never signed a piece of steel.” photo/Jay Yocis [+]

When fans get a glimpse of a remade Nippert Stadium during UC’s home opener this September, most eyes will go immediately skyward to the gleaming five-story pavilion stretching along the west side of the stadium.

Few may realize, however, that the soaring glass and steel addition of premium seats, suites and club spaces now taking shape is anchored — quite literally — in a century of UC football history.

Among the compelling footnotes of Nippert’s $86 million upgrade and expansion is that contractors bored down through long-abandoned locker rooms, training spaces and other dusty catacombs beneath the stadium as they drilled for bedrock to anchor a couple dozen concrete columns that hold up the new pavilion.

In other words, the stadium’s present is literally standing on its past, an appropriate alignment considering Nippert is the fourth-oldest playing site and fifth-oldest college football stadium in the country.

Construction on the stadium began 100 years ago in 1915, but UC’s football team used the site clear back in 1901 when the playing field was surrounded by only a hillside and wooden bleachers. The venue received its name in 1924 when James Gamble, the grandfather of UC player Jimmy Nippert, donated $250,000 in memory of his grandson, who died following a football injury the previous season. 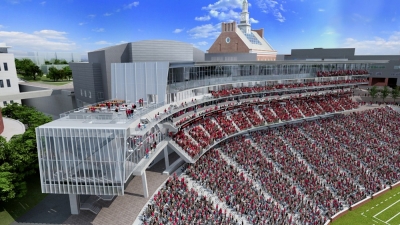 Architectural renderings reveal what fans can look forward to in September of 2015, including a five-story new pavilion along the stadium's west side. Renderings/Courtesy Architectural Research Office [+]

Though the facility has undergone substantial modernizations since it was dedicated as a 12,000-seat stadium in ’24, it has retained its early century brickwork and wrought iron gates that give it a comfortable old-time stadium charm.

“It has been called the Wrigley Field of college football,” says Brendan Fouracre, UC’s senior associate athletic director for facilities and operations. When the latest upgrades are complete, Nippert’s capacity will increase from 35,000 to 40,000 — including 1,100 new club seats, 35 loge boxes and 19 suites — along with plenty of other improvements to the gameday experience.

“This is one of the most unique college football settings in all of America with regard to its intimacy and the fact that it is set down in the middle of the campus and there are all of these great buildings that have sprouted up around the stadium,” says Fouracre, one of the coordinators of the overhaul project.

Planners set out to bring modern amenities such as premium seating options, more restrooms and enhanced concession options — all while opening up concourses with better crowd movement throughout the facility. 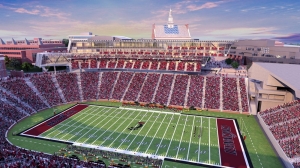 A pulled-back rendering shows how the new Nippert Stadium addition will fit in with the rest of campus. Rendering/ARO [+]

“We haven’t changed any historical aspects of the stadium,” says Fouracre. “We have taken what was historic and enhanced it from the fan amenities standpoint.”
Athletic Director Mike Bohn, who inherited the project started by former AD Whit Babcock prior to his departure in early 2014, says the stadium face-lift will be entirely privately funded.

More than half of the $86 million price tag has been secured through donations, sales of suites and club seats and other premium packages.

“I believe that the financial model is solid and sound,” says Bohn, who anticipates the revenue from the new pavilion and a regularly sold-out stadium will ultimately give UC a chance to generate cash from football and help offset the $7 million in student-athlete scholarships awarded annually. “It is truly an opportunity that is potentially historic in nature for us.

“I believe this will be a transformational experience for our fans and one that will allow us to fuel an intensity of interest in this university and what it represents to our community.”

Bohn says UC fans are yearning to return to campus after spending a season playing their home games at Paul Brown Stadium in downtown Cincinnati.

“Mike Brown and the Bengals organization have been terrific,” says Bohn, “but the anticipation to return home is high.” 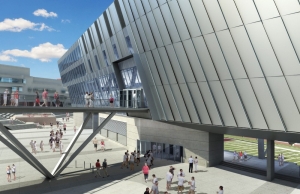 “Our football team is excited to come home,” Tuberville said during a final beam-raising ceremony at Nippert in December. “I’ve been in almost all of the stadiums across the country. This will be one of the most, if not the most, unique stadiums in college football.”

Bohn and staff still have a few hundred unclaimed club seats in the new 115,000-square-foot pavilion, and he says the biggest selling point of the facility is still that there isn’t a bad seat in the house.

“Having the ability to have 40,000 intimate seats is truly special,” says Bohn. “The new seats are cantilevered over the field so fans are right on top of the action. I think that will keep the sense of excitement and the energy in the stadium at a very high level.”

Fouracre says plans are in the works to expand the gameday perimeter by pushing ticket entry points further out from the stadium, including beyond Sheakley Lawn. Fans who have seats in the upper bowl of the eastern side of the stadium also will be able to cross over to their seats directly from the plaza in front of the Lindner Athletics Center via two new bridged walkways. 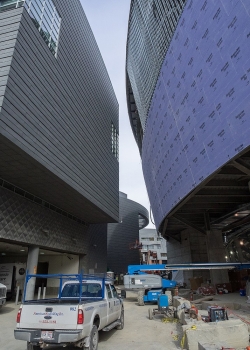 The architectural and engineering challenges of the Nippert project were both above ground and below as designers and workers had to contend with maintaining or moving crucial campus utilities as supports were anchored under the stadium while fitting the new pavilion within only a few feet of Tangeman University Center. photo/Jay Yocis [+]

“Where before they would have to go down to a lower concourse that would be crowded, we will be adding concessions and restrooms in front of the Lindner Center at O’Varsity Way’s brick plaza and giving those in the upper deck a unique opportunity to come over the bridges,” says Fouracre.

Speaking of bridges, fans also will be able to access the stadium from Tangeman University Center as a new footbridge will connect from the UC Bookstore inside TUC to the new west pavilion, an addition that will allow patrons an opportunity to pick up some Bearcats gear on the way to games.

Given the tight space with which to build the new pavilion and the need for Nippert to remain open to the rest of the campus year-round, the university turned to New York firm Architecture Research Office (ARO) as the design architect.

Though ARO has never designed a sports stadium, the firm has plenty of experience shoehorning buildings into similarly complex urban settings.

“The UC campus is well-known for its outstanding buildings and being very pedestrian friendly,” says Adam Yarinsky, principal at ARO. “We were brought in to help define how the building would work in conjunction with the surrounding buildings.”

ARO worked closely with University Architect Mary Beth McGrew and UC's Office of Planning, Design and Construction, along with Heery International, the architect of record and lead architectural firm on the project. Together, designers engineered a way to squeeze the pavilion onto campus, though the new addition arches within a few feet of TUC at one location.

“This is our 50th college football stadium,” says Michael Holleman, who heads up Heery’s sports design group. “We have a niche in doing this type of facility, but this is one of the most exciting ones because it is such a tight site. It is one of the closest and tallest facilities we have done to the playing field. So you are really on top of the action when you are in one of the premium seats.”

Holleman says Nippert is also unique because of the access the rest of campus has had and will continue to have to the facility’s new spaces throughout the year.

“Very few college stadiums allow the stadium to be open all year-round,” he says. “So that was a major part of the design goal.” 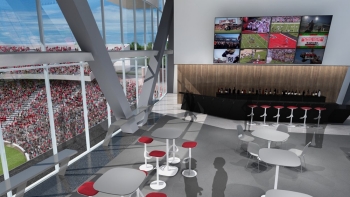 Also important to the design was that sight lines from around campus be maintained into the stadium. For example, a large section of the west pavilion was designed with glass on both sides so those in TUC could still see into the stadium.

“This is going to be a unique structure on a campus that prides itself on the quality of its architecture,” says Holleman. “We think it is going to be a great addition to the world-class buildings already on campus.”

Some of the more popular spaces are expected to include the two-story club lounges with dramatic views of the surrounding campus as well as a large rooftop terrace on the building’s south end.

When it came to the actual construction of the Nippert project, UC turned to Turner Construction, a Cincinnati firm that has plenty of experience building on campus, including the nearby Campus Recreation Center.

“The University of Cincinnati is always a special place for us to work,” says Bob Grace, project executive for Turner. Grace, DAAP ’81, and just about the entire Turner team are graduates of UC.

“You look around UC, and it is a fascinating place with all the different architecture,” says Grace. “This has been a very complicated job, and we knew that going in, but we are thrilled to be a part of it.” 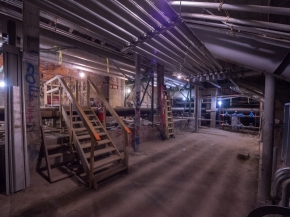 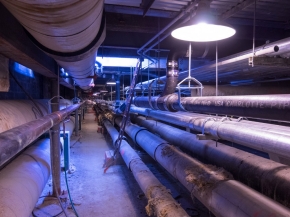 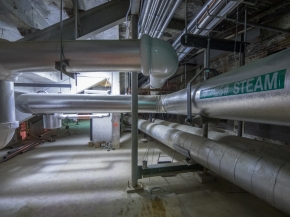 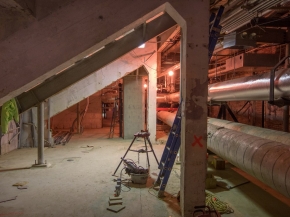 Watch a fly-through of the new facility 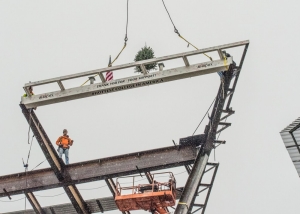 The final ceremonial beam of the renovated Nippert Stadium was placed in December 2014. photos/Jay Yocis [+] 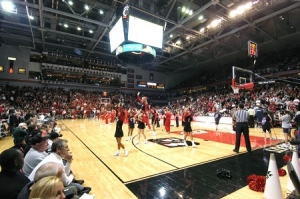 What’s next for Fifth Third Arena?

UC Athletic Director Mike Bohn says his team is working on concepts and fundraising for potentially overhauling Fifth Third Arena, where men’s basketball, women’s basketball and volleyball teams play. Bohn estimated it would take roughly $70 million — all of which would be privately funded — to bring the facility up to modern standards.

“I don’t think there is any question that the energy and the passion behind Nippert has impacted our desire and our aspirations to address a 25-year-old building in Fifth Third Arena,” says Bohn. “Our goal is to help our fans and our students have the finest experience possible around a rich basketball history.”

Bohn says the challenges at the arena are similar to Nippert in that it needs upgrades to restrooms, concessions and the overall feel of the gameday experience. He said any upgrades also would need to address getting fans closer to the action, which could require trimming the 13,000-seat arena down to around 10,000 more comfortable seats and filling the now-empty corners with seating. As of March 2015, the potential project remained in exploratory stages. 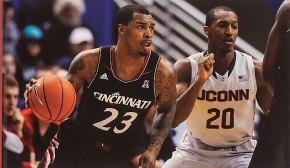 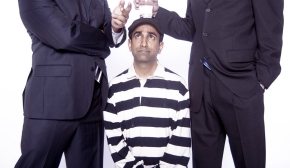 LA comedian and UC College of Engineering graduate Rajiv Satyal shares his take on some of the odd phrases we all say. 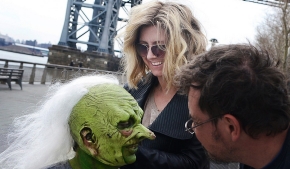 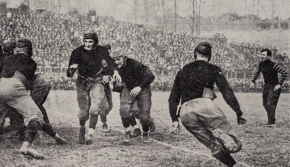 A century after the original Bearcat inspired his team’s name, Teddy Baehr’s legacy extends far beyond the football field.