Though the Bearcat football program has plenty to prove to its hometown fans this year, it may have already won some respect from Columbus, Ohio.

First the University of Cincinnati came within inches of upsetting Ohio State, the eventual national champs, in 2002. Next it was invited to join the Big East, becoming only the second Ohio school able to offer recruits an opportunity to play in a major bowl game. Finally, Cincinnati hired its new head coach, Mark Dantonio, away from Ohio State, where he had spent three years as defensive coordinator. Add those elements to the fact that UC opens OSU's home schedule Sept. 4, and it becomes more clear as to why the Bucks' eyes are looking south with a whole new respect for Cincinnati football. 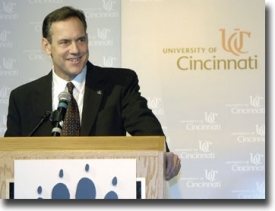 Dantonio makes no secret he would like to model UC's renewed program after that of his mentor and OSU head coach Jim Tressel. "One of the things he was able to do was harness the human spirit," Dantonio said. "When you have a chance to grab those people and make them believe in themselves, then you have a chance to win on the football field."

"Going into the Big East, the stakes are higher," Goin told reporters. "There is no question about that. I have high expectations, and I want to meet those expectations. I want to give our kids a chance to win. The No. 1 ingredient in any success is its leadership. I want to identify a leader who can motivate and can give a vision to our football players of not only how they should behave but how they can win."

Goin reconvened the media on a happier note Dec. 23 to introduce his new leader in Dantonio.

"The university wanted a man that wanted us, one that will stay and build a solid program in the Big East," Goin said. "He is one who knows how to win. He has worked with winners and has been under pressure at the highest level."

Dantonio, 48, has compiled 23 seasons of coaching experience at the college level, including six years at Michigan State. He played college football as a defensive back for South Carolina in the late '70s.