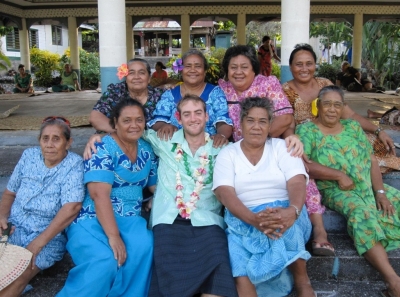 DAAP student Trent Lobdell was a Peace Corps volunteer in Samoa. The women he worked with put on their best clothes for his farewell party, complete with dancing, singing and lots of gifts.

Trent Lobdell learned how to handle ants in his toothbrush and how "to feel more comfortable with discomfort," including a case of diarrhea three times a week. Sara Ernst, on the other hand, discovered an allergy to mango skins and the importance of avoiding the latrine at night. Working in El Salvador, she never knew what dangerous creatures were already using the "facility" in the dark.

Such practical knowledge was not necessarily a requirement for the University of Cincinnati School of Planning's Coverdell Fellow Program at the College of Design, Architecture, Art, and Planning, but U.S. Peace Corps service was. And those lessons certainly indicate services rendered.

DAAP is the only college in four states (Ohio, Indiana, Kentucky and Tennessee) to have two Peace Corps-related programs, says coordinator and associate professor Johanna Looye, who started the curricula in 2002 and '04. Developed in collaboration with the Peace Corps, both programs enable students to incorporate Peace Corps service with graduate degrees in community planning.

The Master's International Program, organized in '02, incorporates two years of classwork with a 27-month Peace Corps assignment sandwiched in the middle. Formed two years later, the Coverdell Fellow Program is for returned volunteers who want to apply skills developed overseas toward earning master's or doctoral degrees. The program requires an internship with a local community-service organization, which provides a domestic-planning component to the international experiences the students already have. (Read more details.)

The Master's International Program, organized in '02, incorporates two years of classwork with a 27-month Peace Corps assignment sandwiched in the middle. Formed two years later, the Coverdell Fellow Program is for returned volunteers who want to apply skills developed overseas toward earning master's or doctoral degrees. The program requires an internship with a local community-service organization, which provides a domestic-planning component to the international experiences the students already have. (Read more details.)

In addition, both programs incorporate a community-service project each quarter and a weekly Peace Corps Seminar where all 10 students meet to jointly hear guest speakers and look at ways "service" fits into all careers, Looye says.

• Highlights from alumni in the Peace Corps since the '60s

• A look at all 10 students in DAAP Peace Corps programs

• Details of the Peace Corps programs for grad students

Prize-winning or not, these students do share a desire to reach out to the underserved. When dreamed-for careers failed to provide that fulfillment, they began getting edgy.

That's what happened to Trent Lobdell, who walked away from an aeronautical-engineering career in Indiana so he could "interact with people more than sitting at a desk," he says. 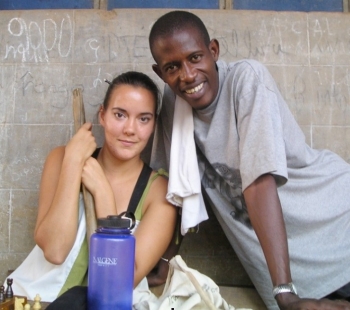 "It was always close to my heart to make a difference in ways that let me use some of my expertise — my math and problem-solving skills. I wanted a job that would enable me to give back to the world."

On vacation in 2007, he visited a friend who was serving with the Peace Corps in Bulgaria. He quickly realized that his friend's work was exactly what he wanted to do. He wasted no time in applying to the Peace Corps, then accepted the most immediate assignment offered — the fall of 2008 as an economic-development volunteer in Samoa.

There he promoted small business development — working with bakers to make new kinds of breads, outfitting a school with donated computers, teaching science and English, and helping women buy equipment for a community garden. The women were so grateful, he remembers, that they fed him for three months and took turns sleeping outside his house to protect him. He's not sure their protection would have been too effective if required, but the gesture touched him.

Coverdell Fellow Jamey Pratt, from Tennessee, gave up a 15-year career as a computer programmer, one who even wrote software for the brokerage industry, to join the Peace Corps. "I always wanted to live abroad," he says.

So he went ahead and did it — took the big jump to teach English in Bulgaria from '06-08. "It turns out we're younger than we think," says the environmental-planning major.

Before coming to DAAP, Jeff Kelley from Michigan did two stints in the Peace Corps 23 years apart, Liberia in '82-84 and Bulgaria in '05-07, to "discover new perspectives and challenge myself," he says. He hopes to graduate as a Coverdell Fellow in the summer of 2013.

Refusing to leave Peace Corps behind

After serving in Zambia from '04-06, Katie Sylvester, M (DAAP) ’10, entered the Coverdell Fellows Program because she "wanted to utilize what I learned and achieved as a Peace Corps volunteer," she says. "That’s what this is all about. You don’t leave it all behind at age 24 and say, 'I'm finished with the Peace Corps.'

"There is no other international volunteer program like the Peace Corps. We create sustainable development that respectfully integrates into a community. These are not American programs. They are the local community’s programs," continues Sylvester, who landed a job as the Peace Corps' field-based recruiter in Cincinnati after graduation. 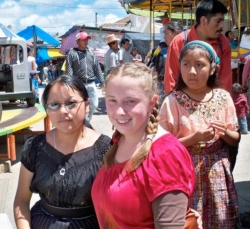 DAAP student Mona Almobayyed (center) served in Guatemala, where she helped sell shampoo for a women's cooperative at the Tecpan fair. [+]

Currently, UC has approximately 18 alumni serving as Peace Corps volunteers, she says. At least, 468 UC alumni have served in the Corps since President John Kennedy created it in 1961.

Furthermore, Ohio ranks 10th in the country for states with the highest number of volunteers. It may have to do with Ohio being "full of intelligent, ambitious and service-oriented people," she surmises. "I find it easy to recruit from this area."

Getting applicants placed, however, is a challenge. "It's becoming quite competitive," she adds. "We get about 12,000 applications a year for 4,000 openings. The Peace Corps wants the most well-rounded appropriate representatives whose skills match needs of the host country."

Every university that submits a proposal to participate in one of the collaborative programs is not accepted, either. "Each has a specialty," Sylvester explains. "Those that are selected are most in line with what Peace Corps is interested in — peace and conflict resolution, nursing, education and health, for example."

Having celebrated its 50th anniversary last year, the Peace Corps is quite familiar to Americans. Nevertheless, it remains a mystery to many indigenous populations.

Explaining a hundred times a day

When Michelle Bova, a DAAP Coverdell Fellow, taught in Armenia during '07-09, she was the first volunteer the villagers had ever encountered. The very first volunteer of any sort.

"I had to explain to villagers a hundred times a day what a volunteer was," she says. And the first day she taught was a little intimidating, as every single teacher in the village came to watch her.

One of her favorite projects was filming a documentary with villagers about endangered species and the people who capture the animals for trade. In the end, "Silent Screams" won the Best Short Documentary award at a German film festival.

Contrary to what one might expect, Bova's highlight of the film-festival trip was not receiving the award, she says. Taking along one of her students who had never been outside of the village before was her bright spot.

Allergy-prone Sara Ernst understands that viewpoint. "People may forget your name," she says, "but they never forget how you made them feel." 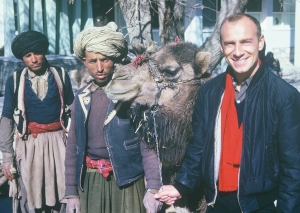 Stats for 50 years of Peace Corps 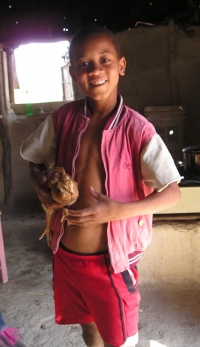