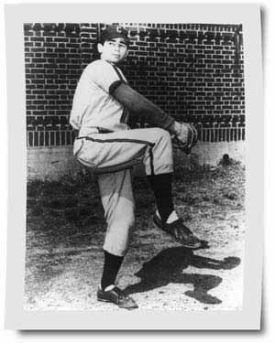 Sandy Koufax, a three-time Cy Young Award winner, was said to be a rather wild thrower when he pitched at UC. Photo/courtesy UC Archives and Rare Books Department

Only a handful in the sold-out Shoemaker Center even knew he was there. Hall-of-Fame left-hander Sandy Koufax did not want any special attention.

He just wanted to be one of the guys. No interviews. Just one of the fellas who had the privilege of playing baseball under coach Ed Jucker, Ed '40, at UC. Those were the conditions in which Koufax, a three-time Cy Young award winner, agreed to return to UC, a campus he had not visited since leaving for the Brooklyn Dodgers in 1954.

And so, when UC retired the jersey of coach Jucker during halftime ceremonies of the Feb. 13, 2000, men's basketball game, Koufax, 64, strolled onto the court with his teammates. His name was never mentioned.

Although it had been 47 years, this was not the first time Koufax and Jucker shared a UC basketball court. Oddly enough, Koufax came to UC to fulfill a basketball scholarship. It just so happened that Jucker coached freshman basketball, as well as varsity baseball.

"I didn't even know he could pitch," Jucker said. "At the end of the basketball season, he told me to come over to the gym to take a look at him.

"I was amazed. It was almost like the wonder man. It struck me in such a fashion. The way he could throw -- the speed and the curve -- you just didn't find that."

Koufax threw so hard that nobody except Danny Gilbert, a friend and fellow transplant from the freshman basketball team, would catch him. Everyone else refused.

"We realized early on that Sandy was not a pitcher," said Gilbert, who has remained close with Koufax. "He was just a thrower. He was a hard, wild thrower. We practiced inside the old Schmidlapp Hall.

"There was not much room in there, and it was poorly lighted. I would work with pitchers on the corners. With Sandy, I held my mitt in the center of the plate and prayed that he could get it over or close. I will say this though, when he got the ball over the plate, he was unhittable."

Major League hitters would learn of Sandy Koufax' overpowering talent, particularly after he honed his control. Koufax pitched a National League record four no-hitters, including a perfect game in 1965. Twice he fanned 18 batters in a game and led the National League in strikeouts four times. He retired on top of his game in 1966 with 27 wins, his third Cy Young award and a chronically arthritic pitching elbow. In 1972, he became the youngest player, 36, to be elected to the Hall of Fame. 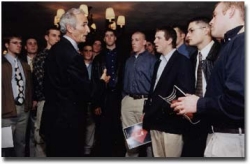 Koufax took time to address UC's baseball team during his first trip back to the university since departing for the Brooklyn Dodgers in 1954. Among the group is future pro Kevin Youkilis at far right. Photo/Dottie Stover

Though the Ed Jucker weekend in February was the first face-to-face reunion between Koufax and his old college coach, they have maintained contact. "It means a lot that he was a member of our team," Jucker said.

"He brought a lot of class to the team. It took more than just a good arm. He was a smart young man and took good care of himself. That is why he had his accomplishments."

Accomplishments are something both men share, but their feats are a rare topic of conversation. "When I talk to Sandy, I like to talk to him as a person, rather than a man who struck out so many batters," he said. "You can find that in the record books. He was a gentleman and a classy guy on and off the field."

Koufax proved his class last July after being named to baseball's All-Century team. It had been years since the two had spoken. Koufax phoned, not to talk about his exciting honor, but to inquire about Jucker's wife, Joanne, who had been in poor health.

Said Jucker: "I asked him how things were going, and he said, 'I don't want to talk to you about that. I want to know how your wife is.' I'll never forget that. It meant so much to me."