Secrets from inside the Bearcat suit 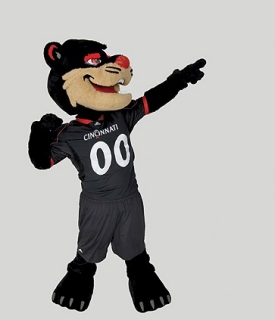 Although today's Bearcat has a cooling fan built into his gargantuan noggin, former Bearcats seem to agree that taking on mascot duty -- known to include such antics as crowd surfing -- has always meant enduring brutal heat. Photo/Lisa Ventre

As a student, Steve Trepkowski never missed a Bearcats game. Ever. That's why it seemed so odd to his friends when he suddenly went missing from UC games.

"I went to every sporting event," says Trepkowski, CCM '05. "So when I stopped showing up, it was like, 'Where's Steve?'"

His friends didn't know that when "Trep" went AWOL, he was actually cheering closer to the action than any of them could have dreamed. Steve spent 2002-04 trolling the sidelines, mugging for the TV cameras and high-fiving the cheerleaders in a full-body fur suit as the Bearcat mascot.

Trepkowski is one of a select few dozen UC students who, over the last several decades, can claim the rare experience of having brought to life UC's man-size Bearcat uniform. Here we explore the view from inside the giant head and chase down a few tales from one of the university's most exclusive clubs.

Rule No. 1, as any team mascot will tell you, is you never talk while in the suit.

"Talking is definitely off limits," shares UC's current mascot, who chose to remain anonymous during a phone interview. "That's the main rule. As far as everything else is concerned, it is more like, 'Do now and ask later.'"

Mascot activities that fall into that "ask-later" category include such favorites as crowd surfing in Nippert Stadium -- where the Bearcat stiffens his body and allows fans to pass him over their heads -- and chair-sliding down the Fifth Third Arena steps, which requires a folded-down chair for a sled and a healthy dose of nerve. 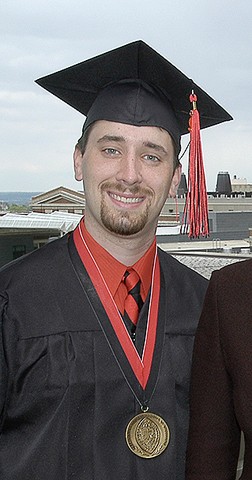 'You could easily dehydrate in that thing pretty quickly on a hot day,' recalls Steve Trepkowski, CCM '05, who wore the suit from 2002-04. 'It was probably 10 to 20 degrees warmer in there at least. 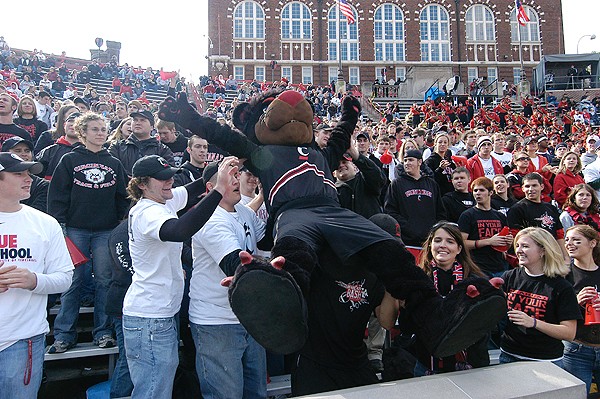 Crowd surfing has become a rather regular behavior for the Bearcat. 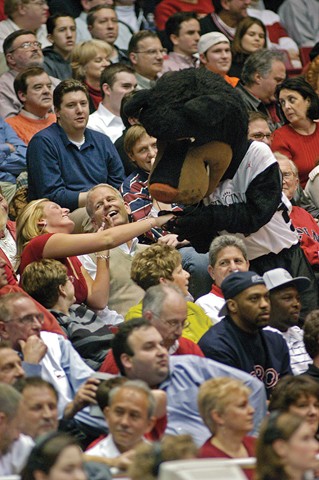 From time to time, the Bearcat is known for falling for certain UC fans. 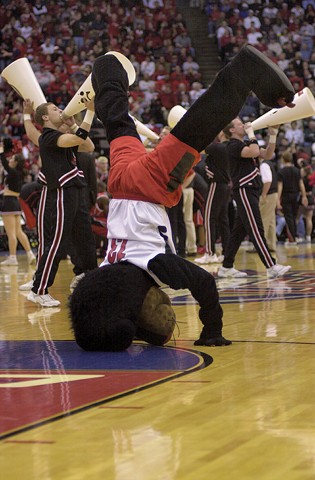 The Bearcat mascot receives a small stipend for his or her time, usually around $500. Plus they get to travel with the team at no charge and receive a per diem for food while out of town. It's a deal worth flippin' for. 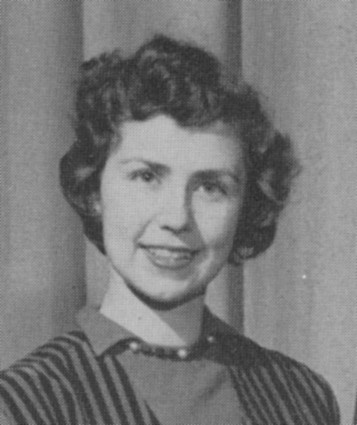 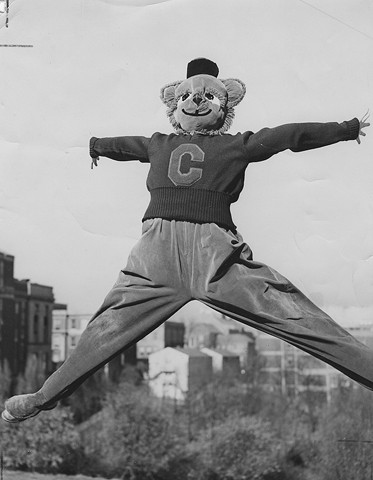 Pat Stromberg, a former tumbler, shows off her hops in the early '50s. 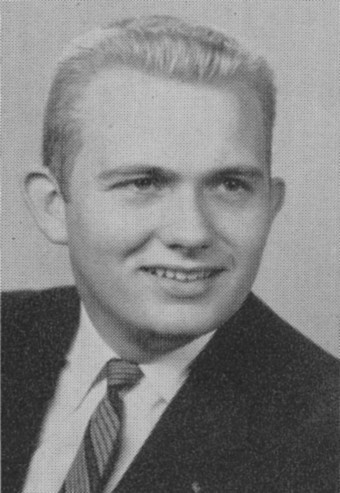 Alfred Behrens, Bus '57, may have been the first Bearcat to crowd surf. 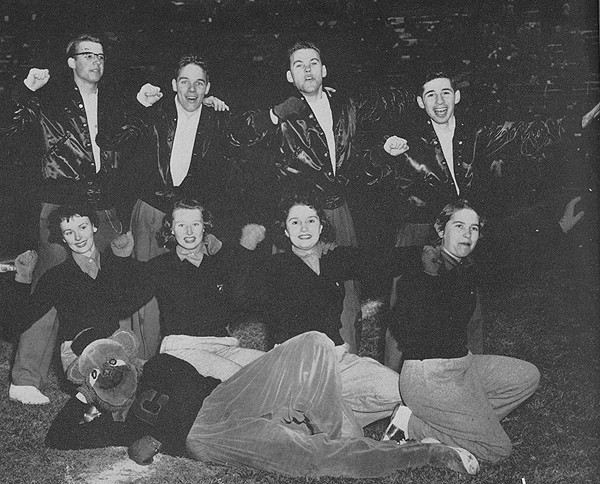 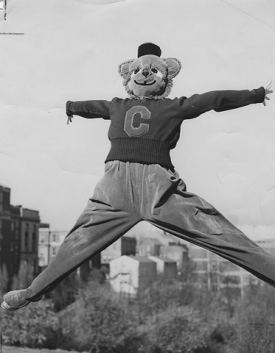 The looks and personality of the UC mascot has changed a great deal over the years. Here is one of our earlier photos from the 1950s.

"The chair slide can be kind of dangerous if you don't know what you are doing," says today's veteran mascot, who splits appearances to a couple dozen monthly events with two other student mascots. "When you first do it, it is pretty terrifying actually.

"The younger guys start low at about the fifth row. I think I've done it from about the 17th row. There is a little bit of technique to keeping your weight forward, but you basically just sit down and go and let the railing at the bottom stop you."

Not all mascots have been into such death-defying acts, says Trepkowski, who made working the crowd his signature move.

"When I was the mascot, the Bearcat was more cute and cuddly," he says. "The new one is more aggressive, but my opinion of the Bearcat was that he was more of a lover than a fighter. And I played that role up pretty well.

"The funniest thing was when you would find a really cute girl. You could steal her away, then watch the boyfriend get all fuming mad. That would always crack me up."

Whether wearing the teddy-bear-like spirit suit or the current costume (which was redesigned to be more fierce in 2006), the furry fellas agree that it is nearly impossible to keep the mascot's identity a secret, especially from friends.

"It is supposed to be something you keep quiet," says Trepkowski. "But how easy is that when the suit is sitting in your kitchen? You take the thing home. You clean it."

One of the first things Bearcat trainees learn in Cheer 101 is the mascot's stride.

"The Bearcat has got a swagger to his walk. His chest is out. He walks with a purpose everywhere he goes. He is lively and has a hop to his step. He is very confident."

Not nearly as much training and thought went into being the mascot in the early days when Alfred Behrens assumed the duty. Behrens, Bus '57, wore the suit for a few years in the mid-50s, usually without an audition.

"We had a tryout one year, and I got beat," he says. "The guy did it for one football game, then came carrying the uniform back down to the fraternity house and said, 'It's too hot under there. I'm not doing it anymore.'"

While the outfit back then resembled more of a ragtag handmade bear, the mascot's antics were not so different from today's professionally tailored and muscled-up version. In fact, Behrens may have been the first Bearcat to crowd-surf, more than 50 years ago.

Out of town for the Navy game, a group of Midshipmen approached him and asked, "Do you mind if we pass you up?" he recalls. "I said, 'What are you talking about?' They said, 'Well, you just lay out, and we'll pass you up.' So I went over there and laid down, and they passed me up and down the crowd."

Behrens brought the idea back with him to Nippert Stadium, and soon Cincinnati fans learned to pass the Bearcat around the stadium. Behrens favorite claim to fame in the Bearcat getup, however, was getting to meet movie star Doris Day.

The Bearcat and several cheerleaders had been invited to a local TV station as part of a media event. The problem, Behrens says, was the reporter doing the interview was so taken with Day that he forgot to introduce the UC squad. So Behrens took matters into his own hands.

"I remember saying, 'If something doesn't happen fast, we aren't going to get on the air,'" he says. "So I got on my hands and knees and crawled through the station.

"I crawled all the way around the desk and stuck my head between the guy doing the interview and Doris Day, then put my arm around her. We ended up getting on TV and doing a couple of cheers. I told everybody that I didn't wash my arm for quite a while."

For the business major, one of the best parts of the mascot gig was thinking up new and creative ways to make his entrance into football games. Once he came in on a motorcycle, and another time he had his pledge brothers from Phi Delta Theta carry him in on a king's chair like a pharaoh.

"I thoroughly enjoyed my time as the Bearcat," says Behrens, who ran his family's paint store in Anderson, Ind., until he retired in '02. "You could do numerous things on the field that you would never do if you weren't dressed as though people couldn't see you. I'd get in with the band and the majorette, then create a little havoc during the halftime shows. It was an absolute blast."

Though most who have worn the suit have been men, the Bearcat hasn't always been quite so manly.

Pat Stromberg, Ed '54, once an active member of the Student Religious Council at UC, took on the Bearcat job partly to protect her reputation. Considering she had been in charge of organizing a major religious conference on campus, she feared fellow UC students might begin to think of her as only a "goody two-shoes."

"So I thought, if I become the Bearcat, then people will know I'm a real person," laughs the retired Denver educator. "It was great fun. I'd run up and down the stands, and if there was a bald man, I'd pat him on the head and sit in his lap. I'd just tease the people a bit. I can remember hearing people say, 'I think the Bearcat is a girl. Boys don't run like that.'"

More masculine mascots also were unable to do the cartwheels, handstands and, especially, the splits like Stromberg (pictured above), an adept high school tumbler. Though records don't indicate how many female students have worn the suit, she suspects there were few.

For her, leading the football team onto the field with the cheerleaders was the biggest thrill, and more than 55 years later, the experience is one she still likes to toss out.

"Whenever I'm in a group and they ask, 'What does the group not know about you?' I say, 'I was the Bearcat at the University of Cincinnati.'"

For others, the best part of being the mascot was getting a front-row seat to all the best games. "I remember the OSU-UC football game in Paul Brown Stadium in 2002," says Trepkowski, who now wears a completely different type of uniform as a Navy officer. "There was just an electrifying feel to being down on the field."

He experienced similar moments at Fifth Third Arena, including one time when he was out on the court during pregame. "The team grabbed me and formed a circle at center court, and they were kind of beating on my head. They were getting pumped up before the game, and they wanted me in on it."

Getting pounded on the head by your team … for a mascot, it doesn't get any better than that. 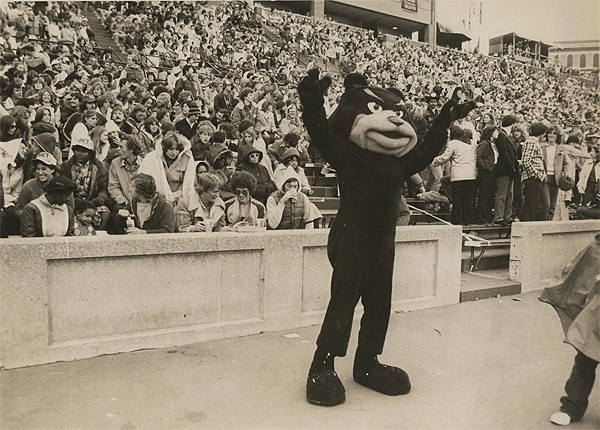 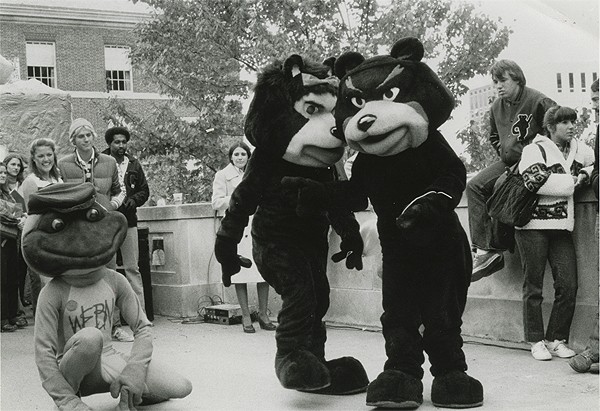 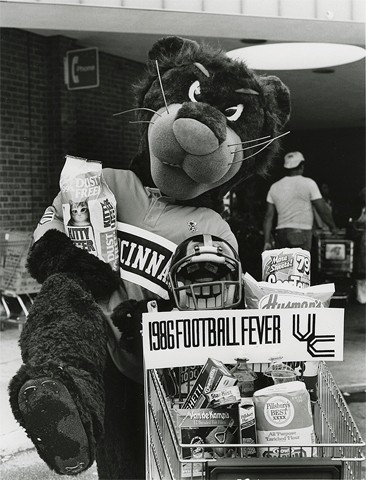 By 1986, a whole new Bearcat look emerged on the sidelines at UC. 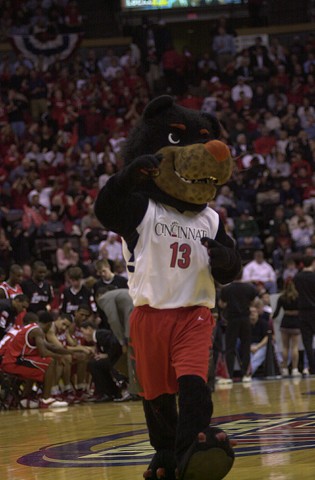 The Bearcat remained a rather cuddly creature through the 90s and 2000s. 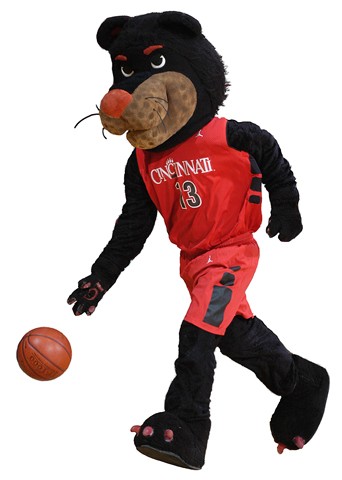 And he has always been one to show up for a good cause. 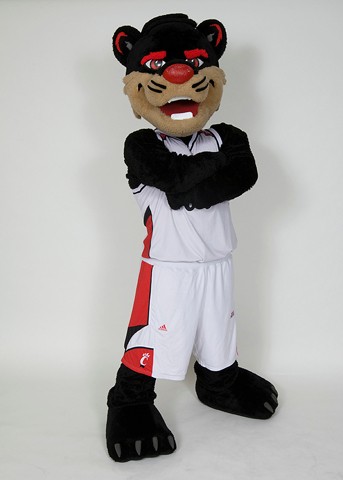 In 2006, UC premiered its current mascot, a rather fierce looking character. 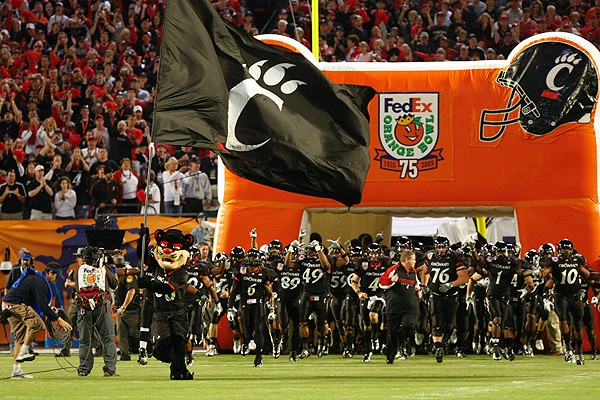 And when the mascot duty entails such experiences as leading the football team onto the field in Miami during the Orange Bowl as it did last year, could there be a better job on campus? 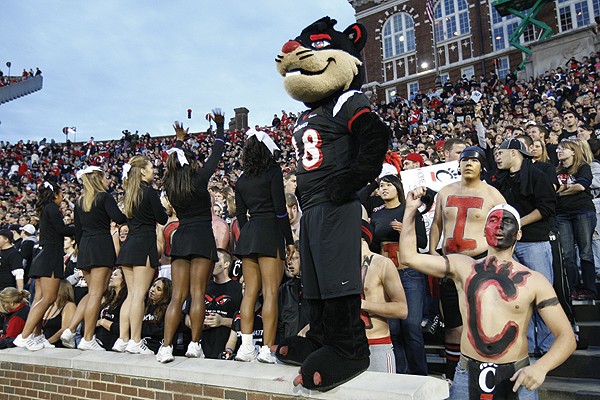