From victim to advocate

One survivor's tale of breaking free from domestic violence 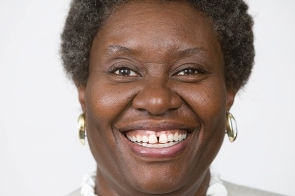 Etta had taken her last beating.

Just to be sure though, she had her 11-year-old son snap a photograph of her pummeled face. It was the only picture she ever allowed of herself -- while she was "beat up" that is. The image wasn't for evidence against her abusing boyfriend. It was a reminder never to go back, never to allow this to happen again. Not by anyone.

The abuse Etta Caver sustained after 13 years and two violent relationships could have filled rolls of film. But instead of documenting it, she hid it. She hid the goose-egg-sized knot on her forehead under a big hat one Christmas morning. For years, she covered up the bruises and wore dark sunglasses to conceal her blacked eyes.

Caver, today a master's student in UC's social work program and a victims advocate, eventually escaped, but nearly too late. After almost 12 years of marriage, she left a cruel husband only to run into the arms of someone who hit harder. And though she tried to kick the second man out of her house and her family's life, he wouldn't leave.

"It got to the point where my neighbors refused to open their door for me anymore," she says. "I had been to the hospital. I tried calling the police. We had lived in shelters and out of my car."

Lying in a hospital bed in 1986, she remembers a social worker holding up an X-ray of her face. The image explained the ungodly swelling. She had a damaged eye socket and five loose teeth. Worse yet, the bones behind her face had been cracked, and her nasal passages were torn. She was literally blowing up her own face like a balloon with every breath.

"The lady at the hospital said, 'He broke your face,'" Caver recalls, in far too calm a voice. "And I said, 'I'm going to kill him.' And I meant exactly what I said. I guess she could tell I meant it because she went and got the police.

"They stood around my bed and said, 'We will help you if you let us.'"

The 32-year-old mother of two took their help and took her boyfriend to court. He was arrested, charged with domestic violence and eventually ordered out of the city. It was that day, before she left for court, that her son pointed the camera at her disfigured face and snapped a single headshot. Caver had no idea that she would one day be sharing that ugly image with others in an attempt to help them escape violence, a subject of which she became far too familiar.

Trauma for Etta reaches clear back to age 15 to a horrific night in 1969 when her mother, Emmie Caver, was stabbed to death in their Dayton, Ohio, front yard. To this day, the family has no idea who did it or why. Their father had long been out of the picture, and her mom was going out for the night. Etta was home babysitting her three younger siblings when a neighbor broke the news.

"I wanted to protect my sisters and brother from seeing my mother like that," she recalls, her voice quivering for the first time in the interview. "But it was way out of my control. There was nothing I could do. My sister saw my mother and let out this scream that I can still hear today. It was indescribable. It was a tsunami."

The Caver kids -- a once happy bunch who used to play kickball in the street -- were hurried off to live with their grandmother in Hamilton, Ohio. Their clothes and other reminders of the past were thrown out to eliminate the "triggers." And they didn't talk about that night. Still don't. Etta got married shortly after high school. But before her first wedding anniversary, her husband was beating her.

"I wasn't aware of what domestic violence really was," she says. "I thought if I could create an environment that was safe and peaceful, then he could come out of what he was in, and we could live happily ever after. But that didn't happen. I made it look good from the outside because I didn't want anybody to think that I married a man who was beating me up."

Caver today works in the prosecutor's office of Middletown's Municipal Court as a victims advocate doing what she wishes someone would have done for her many years ago. She speaks up for victims. She shares information about the characteristics of abusers. And she always assures the victims it isn't their fault.

Caver left a 24-year career at AK Steel for a chance to make a difference. The 54-year-old nontraditional student finished her bachelor's degree in social work at Miami University in 2005 and will graduate from UC next year with a master's degree.

She is using her painful experiences to reach out to women, and some men, who are suffering. She also speaks in area high schools as part of the group Citizens Against Domestic Violence. "My goal is to inspire these women to believe they are worth more than what they've been through."

A resource for those looking for a recovery center