by Bob Egleston and John Bach 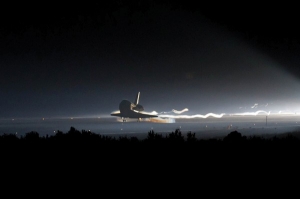 PHOTO GALLERY -- The Space Shuttle Program ended in the early morning of July 21, 2011, as the space shuttle Athlantis touched down at Cape Canaveral, Fla. Meanwhile, UC alumni throughout NASA were celebrating the achievements attained during the 30-year program. photo/NASA/Bill Ingalls

"After serving the world for more than 30 years, the space shuttle has earned its place in history, and it's come to a final stop."

Atlantis commander Chris Ferguson uttered those words at 5:57 a.m., July 21, 2011, on a steamy, pre-dawn Florida runway at the Kennedy Space Center (KSC), signaling the end of the Space Shuttle Program and the latest chapter in America's quest for space. Though the mission had ended, NASA's chief flight director John McCullough, Eng '89, lingered inside the Mission Control Center at the Johnson Space Center in Houston for another two and a half hours.

"We didn't want to log off the console," he bluntly admits. "None of us wanted to be the first one to leave."

For McCullough, who oversaw all aspects of flight control for the final 13 shuttle missions over the last three years, the vivid image of sitting at his console in the back of the room for the final flight will stay with him always.
"It really just sunk into me," he says. "It is almost like you are seeing the ghosts from the future looking back at that moment in time." 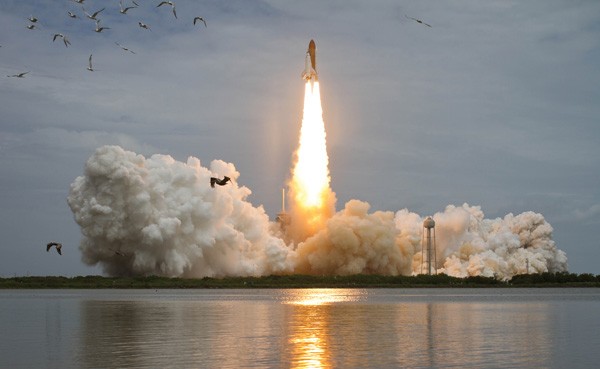 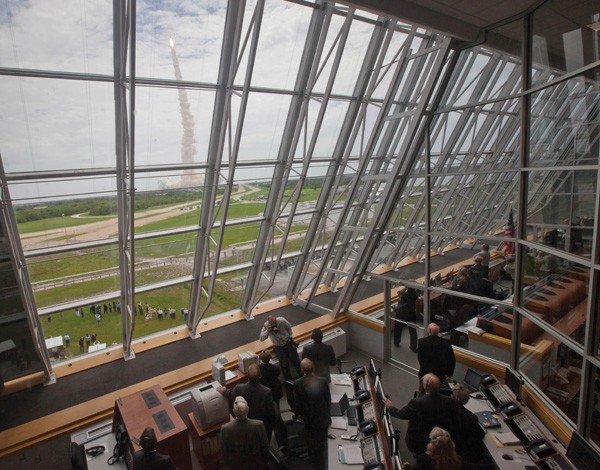 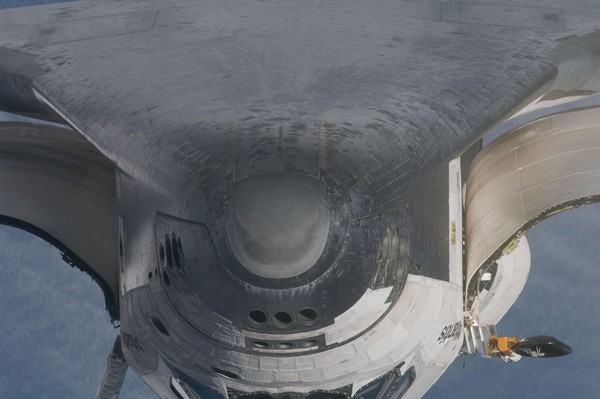 An onboard camera captures the shuttle's image during flight. photo/NASA 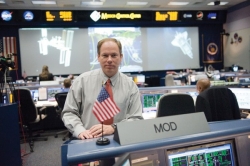 McCullough couldn't help but hearken back through the history of that very room -- a place he calls a "cathedral of spaceflight" -- to the day he watched Columbia explode in 2003 or to his many conversations there with Chris Kraft, NASA's first flight director for whom the building was named in 2011.

"When you hear someone like that talk about being in that room during Apollo 1 and seeing good men die, seeing men accomplish things beyond our wildest dreams like landing on the moon, it becomes bigger than you. It is something that's intangible. You don't just go in that room and not feel it. It is spiritual."

Still, despite the historic moment, during Atlantis' final bittersweet flight, it was business as usual, he says, with little time for personal reflection, even for the men and women who knew pink slips awaited them.

"All the way to 'wheels stop,' it was not just the last flight, it was the current flight," he says. "We were in charge of the vehicle until it was turned over to KSC. We executed the last mission with discipline."

Nothing less was expected. Discipline has always been a key focus for McCullough and those like him, who have the sobering responsibility of ensuring that astronauts return to Earth safely. In other words, lives have always been at stake.

In McCullough's office hangs a framed reminder "to always be aware that, suddenly and unexpectedly, we may find ourselves in a role where our performance has ultimate consequences." That is the second principle of NASA's "Foundations of Mission Operations," which also notes, "We must master fear and hesitation before we can succeed."


"Space is a hazardous environment," McCullough reminds us. "It is a very unforgiving place. It is not a place people naturally thrive in. 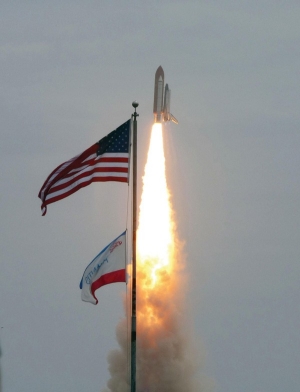 "You are constantly fighting the elements. If your response isn't timely enough, the mission can fail. You have to deal with what you can't possibly be prepared for."

Few people have enjoyed a better view of NASA's storied shuttle program than McCullough, a UC aerospace engineering grad who has served at Houston's Johnson Space Center since 1992. Over the years, few of his experiences have compared to getting to inspect the shuttle with his own eyes.

"Prior to each launch, we would all go out to the vehicle on the pad and walk it down," he says. "I've been inside the vehicle. I've been at the base of it looking up.

"It is something that just overwhelms you when you are there. Thinking about the 10 million parts that have to work properly and how man can get together and overcome natural forces of gravity to achieve something like human spaceflight is still just amazing."

McCullough has worked more than 650 shifts in Mission Control as the flight director in charge, a responsibility that requires overseeing dozens of other flight directors who monitor every technical detail of shuttle and International Space Station missions. Flight controllers, he says, are forced to multitask and know literally everything about a particular system or aspect of the mission. "You have to focus on what's going on while having additional bandwidth in your head to pay attention to other things." 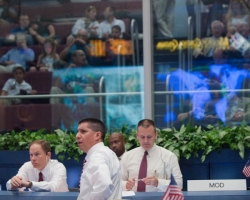 John McCullough (on left) at work during a mission.

For example, when disaster struck a 1996 shuttle mission, McCullough's quick thinking helped scientists salvage valuable data that otherwise would have been lost.

Astronauts had deployed a satellite from the shuttle on a 12-mile tether to gather information about electrical energy created while flying through the upper reaches of Earth's atmosphere, the ionosphere. Unknown to anyone, a microscopic hole in the tether's insulation exposed it to an electrical arc, causing it to snap.

The crew began losing transmissions with the rapidly drifting satellite, when McCullough remembered that a NASA ground station was close by. He drove to the station and re-established contact with the satellite through a ground link, helping NASA obtain more telemetry before the satellite drifted out of range. In the end, scientists gathered enough data to begin to understand the ability of such a tether in generating electrical power.

Star-struck kid
As a child, McCullough was always fascinated by space -- from the Apollo moon landings, which impressed him, to science fiction, especially "Star Trek."

"Their vision of the future was compelling," he says of the USS Enterprise crew. "It was a noble thing the way they all worked together."

As a fourth-grader in 1973, he was captivated by the Comet Kohoutek, which made a near flyby to the earth. "I would dig in the backyard for meteorite fragments and moon rocks, then bring them to my parents.

"They were just rocks, but my mom never really said so. She had a great imagination and always encouraged me." 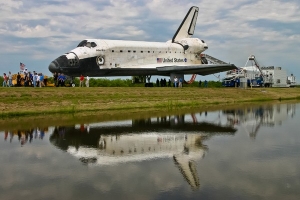 By fifth grade, he had made up his mind he wanted to be an aerospace engineer, taking an interest in planes and, of all things, orbital mechanics. Years later, when looking for a college, he knew UC was one of the nation's best, and the co-op program was a huge draw.

He paid his way through college working at Uno's Pizza and DuBois Book Store. He married his wife, Julie, A&S '87, while they were students, then dropped out for a year to work so she could finish school.

What impressed him most about UC was what happened when he decided to reenter the aerospace program. "The dean [Constantine Papadakis, MS (Eng) '70] sat down with me," he says. "He wrote a letter for my file stating that they should take me back with no questions. He cared about me as a person."

McCullough's introduction to the Johnson Space Center came during his first co-op assignment at McDonnell Douglas Astronautics Co. Having driven 23 hours straight from Cincinnati to Houston, he arrived around 9 p.m. and drove directly to the main gate of the space center to soak in a moment he had long dreamed about.

"It was dark when I arrived," he vividly recalls. "The fall air was crisp, and it was something how the space center was lit up."

At McDonnell Douglas, McCullough gained experience in shuttle-entry flight performance and ascent flight design. Later, on assignments with Douglas Aircraft in California, he worked on horizontal tail analysis for the MD80 jet aircraft.

After graduation, his co-op contributions translated into a full-time position with NASA, where he worked on shuttle simulators, giving astronauts hands-on experience prior to launches. He played a key role in upgrading the shuttle simulators to reflect changes in computer systems and software.

After getting certified, McCullough even flew the simulator, an experience he compares to an ultimate video game. From simulators, he moved on to flight control, which is where he has spent his career.

"You start out in a backroom experience doing minor things and learning the systems, then you work your way toward the front room, which is the one seen on TV. It is kind of like the major leagues of flight control. It is the big show, where you get to make an impact on the space program directly."

Though the shuttle program has now ended, McCullough's mission as NASA's chief flight director is nowhere near complete. He will continue to oversee operations in the International Space Station, which McCullough refers to as "a-million-ton spacecraft with 16 countries all working together for the common good."

Mission Control not only sends 30,000 commands to the space station a month, but also monitors the power, orbital altitude and systems that enable the crew to conduct experiments and perform other maintenance activities 24 hours a day. 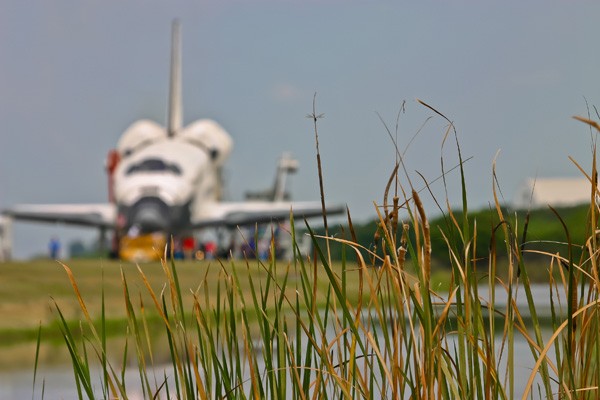 UC alumnus Bob Egleston got to co-write his dream assignment when he attended the space shuttle's final launch and landing.

McCullough says NASA will still support four launches a year with its Russian partners, supply staggered crew changeouts and develop a new rocket design that will allow the U.S. to once again supply cargo and crew members directly to the station in the future.

He is sad to see the space shuttle program end, but is especially proud that his colleagues remained loyal to both the crew and the program until the end. The professionals at NASA, he says, wanted to be "the people that made a difference."

"Change is something that happens, and we all have to deal with it," he says. "But, boy, we were good, I'll tell ya. We were good. And we still are."

Bob Egleston, co-writer of this article and photography contributor, is a 1984 graduate of UC's School of Architecture and a senior project manager with Heery Design in Orlando. He is a space enthusiast and a freelance writer/photographer.

Related articles:
Other UC alums with dream NASA jobs
What's next for NASA?

Link:
More from NASA on 30 years of discovery