What's Next for NASA after the Space Shuttle Program? 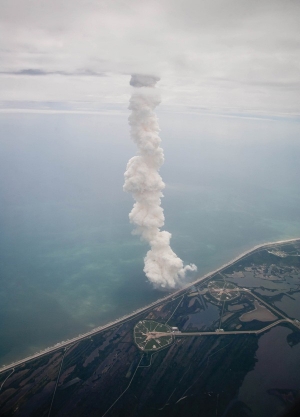 The exhaust plume from launching the space shuttle Atlantis' final flight is seen from a Shuttle Training Aircraft on July 8, 2011, in Cape Canaveral, Fla. photo/NASA/Dick Clark

The end of the Space Shuttle Program on July 21, 2011, did not mean the end of NASA or even of NASA sending humans into space. "We are not ending human spaceflight, we are recommitting ourselves to it and taking the necessary and difficult steps to ensure America's pre-eminence in human space exploration for years to come," NASA administrator Charlie Bolden says.

"The space shuttle gave us tremendous insight into how humans can live, travel and work in space. Because of the shuttle, we have the International Space Station (ISS), which is giving us the breakthroughs in human health research.

"But we have to do things differently. The shuttle is an expensive system to maintain. We have to get out of the business of owning and operating low-Earth-orbit transportation systems and hand that off to the private sector, exercising sufficient oversight to ensure the safety of our astronauts."

NASA's future focus will be on deep-space exploration, science missions and research on the ISS. According to NASA officials, here is what's next for the agency:

Deep-space exploration
With a goal of landing humans on Mars, NASA is designing and building the capabilities to send humans to explore further reaches of the solar system, including technologies for solar-electric propulsion, refueling depots in orbit, radiation protection and high-reliability life-support systems.

International Space Station
American astronauts will continue to live and work in the ISS 24 hours a day, 365 days a year, conducting scientific research in the portion of the station designated as a U.S. national laboratory. Commercial companies are taking steps toward providing cargo and crew flights to the ISS, allowing NASA to focus its attention on research.

Science missions are numerous and will include a year-long visit to the large asteroid Vesta to help scientists better understand our solar system's history. Next February, the Nuclear Spectroscopic Telescope Array will be launched to search for black holes, map supernova explosions and study the most extreme active galaxies.